Kids around the world are striking again for the climate. They aren’t giving up. 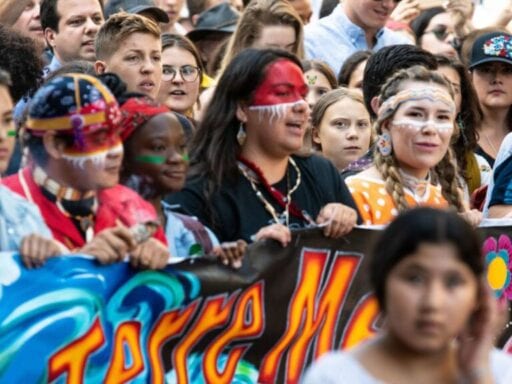 Greta Thunberg is targeting the airline industry this week.

Another youth-led climate strike was underway in several countries around the world Friday, a week after organizers rallied more than 4 million people around the world into the streets in a strike to demand action on climate change.

In cities like Milan, Budapest, Arusha, Tanzania, and New Delhi, young people once again swarmed public spaces with signs and chants to show their fear of the accerelating climate crisis and their demands for decarbonization.

The mood was electrifying at the New Delhi #ClimateStrike today. Listen to the chants #FridaysForFuture pic.twitter.com/Xw6v5e0Dmj

In Washington, DC, activists blocked streets and marches with banners, as they did on Monday.

We are not going to let a handful of greedy CEOs and politicians steal our future. They will kill everything on this planet if we don’t fight back.

“My message is that we’ll be watching you,” she said. “We are in the beginning of a mass extinction, and all you can talk about is money and fairy tales of eternal economic growth.”

While 67 countries this week indicated their intention to enhance their commitments to climate action under the Paris climate accord by the end of 2020, the summit failed to deliver big commitments to limit greenhouse gas emissions from the world’s largest emitters: China, the United States, and India.

Ultimately, youth activists didn’t get all of the results they wanted, but the summit showed they changed the conversation around climate change on the international stage. World leaders noted that such an event would not have happened without the pressure from young people.

“Each week for months and months now we’ve had young people speak,” said French President Emmanuel Macron. “I think they’ve identified an absolute urgency that we have to respond to here.”

And so youth and other campaigners are planning to keep up the pressure, continuing the weekly strikes that preceded the massive demonstration last week. Dozens of events are occurring around the world on Friday.

Unlike last Friday, public schools in New York City won’t excuse students to attend the strike. But Italy’s education minister Lorenzo Fioramonti invited students and families to participate in the strike in his country.

And it seemed to have worked: The turnout in Italian cities like Rome, Turin, and Milan appeared to have been significant.

The climate strike is back!

Thunberg joined a climate strike in Montreal, Canada, outside a meeting of the International Civil Aviation Organization, a UN agency.

“We’ve become too loud for people to handle, so they try to silence us. So we should take that as a compliment,” says Greta Thunberg on why she draws the ire of politicians — from Trump to Bernier. #climatestrike #climatestrikecanada #MarchePourLeClimat #marcheclimat #Montreal pic.twitter.com/3p08DUcGgv

She gave up flying (and sailed to the US for the summit) because of what she learned about the impact of the aviation industry on the global climate. It produces 2.4 percent of global emissions, but there are few options for shrinking this footprint and demand for air travel is poised to surge in the coming decades.

Thunberg and other activists want airlines and regulators to do much more to limit those emissions.