Kim Kardashian’s sisters said she looked anorexic. She took it as a compliment. 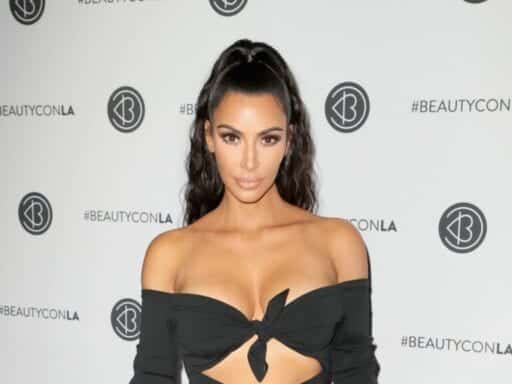 Kardashian’s sisters said she looked anorexic. She took it as a compliment.

To most people, to be anorexic is to have a debilitating disease, an eating disorder. But in the mouths of Kim Kardashian West and her famous sisters, that description seems to have another meaning: to be desirably, delightfully thin.

We learned this tidbit recently when Kim posted videos of herself and her sisters joking about it on her Instagram account. Their jokes gained traction and circulation when they were reposted by others on Twitter.

“Your hair extensions, your ass, your tits, everything, they’re heavy, ’cause she’s fucking voluptuous,” Khloé Kardashian says while ogling her sister Kim in an Instagram story posted to Kim’s account. “But she’s anorexic here,” Khloé continues, pointing at Kim’s waist and noting, “her arms are, like, pin-thin, they’re like my pinky.”

Kim laughs, appearing to take Khloé’s comment as a high compliment. The clip was part of a series of videos posted to Kim’s Instagram story in which Kim asks both Khloé and their half-sister Kendall Jenner how skinny she looked.

In a different clip, Kendall looks at Kim and says, “No, like, I’m really concerned. I don’t think you’re eating.”

In each of the videos, Kim prods and pokes, trying to coerce each sister into flattering words about her weight. Each time they do, she responds with giggles and thank-yous.

Kim Kardashian is facing backlash for her joyful reaction to being called ‘So Skinny’ and ‘Anorexic’: “I’m 119 Lbs.” pic.twitter.com/xCAt1zXBhU

The backlash was nearly immediate.

Saw a video where Kendall Jenner tells Kim Kardashian that she looks like she never eats and that she’s concerned about how skinny she is. Kim K says “thank you” in the most delighted voice.

Like, do they ever get tired of being so problematic?

On one hand, there isn’t anything wrong with sisters complimenting one another’s appearance. But because of the way Kim’s sisters complimented her, and because the conversation played out in front of Kim’s 115 million Instagram followers, many people believed Kim was setting a poor example for anyone who viewed the videos by suggesting that looking like someone with anorexia or starving yourself is something to be commended.

The videos were clearly meant to be funny. The women are laughing, and one can glean that their intent is sarcasm. On some level, it’s not difficult to get into the Kardashians’ mindset and find some dark, sardonic humor in Kim’s obvious weight loss — that women’s bodies are held to impossible standards, especially women who are famous and in the public eye. It’s difficult to think of a woman, and impossible to think of a family of women, whose bodies are scrutinized and judged as much as the Kardashians’ bodies are. Perhaps these jokes were a way to vocalize the pressure they face about their looks.

But as the Kardashians’ critics point out, the glorification of Kim’s skinniness and the joking about anorexia are dangerous viewpoints to share in front of the young people who idolize the sisters.

The Kardashian sisters regularly post benign or inane videos to their Instagram and Snapchat stories. Watch their stories on any given day and you’re likely to find them posing during hair and makeup shoots, giggling over inside jokes, and goofing off with the apps’ various filters. Most of what they post could be reasonably characterized as silly but harmless.

But many people have argued that this particular series of clips was actively harmful, not only because of how Kim and her sisters casually tossed around the term “anorexic,” but because this isn’t the first time Kim has displayed an apparent obliviousness to the message about eating disorders, anorexia, and the value of being thin that she sends.

Whether an adult decides to buy a lollipop that is intended to kill her appetite because Kim Kardashian promoted it is completely up to the adult in question. There’s also nothing wrong with wanting to look like Kim Kardashian, if that is how one’s spirit is moved. But Kim also has legions of young fans, and the message she’s sending with the ad is that these lollipops will help them look and be more like her, including her weight.

One of the most outspoken critics was actress Jameela Jamil, a star of NBC’s The Good Place, who called Kim a toxic influence:

No. Fuck off. No. You terrible and toxic influence on young girls. I admire their mother’s branding capabilities, she is an exploitative but innovative genius, however this family makes me feel actual despair over what women are reduced to. ☹️ pic.twitter.com/zDPN1T8sBM

Kim didn’t directly respond to critiques of her ad or her responsibility. She did, however, retweet a fan who photoshopped the ad into a declaration that Kim’s beauty business was thriving, complete with an added LOL. This gave the impression that she didn’t care about the conversation the ad had sparked:

Seriously this is the best edit ever! I want to use this as my campaign LOL https://t.co/R53LFdTzlV

The current backlash to her Instagram stories echoes Jamil’s sentiment that Kim is setting a poor example:

I’m just gonna say this. Using the words “anorexic” and “you look like you don’t eat” as compliments is disgusting. Even if you’re saying them as a joke. An eating disorder should never be used like that. And the fact that Kim Kardashian was squealing with happiness is sick.

Kim’s critics point out that Kim, whether she realizes it or not, is spreading a dangerous message to her fans and taking her to task for not realizing just how powerful she is or what a bad example she’s setting.

In the sphere of contemporary pop culture, I can’t think of a celebrity whose body is as scrutinized, discussed, and written about in the news as Kim Kardashian’s. Just this week, in the midst of this conversation about anorexia, Kim has also made news for clapping back at Tyson Beckford after he commented that she looks as if her plastic surgeon botched her hip.

Articles exploring which parts of Kim’s body are “real,” or about how to get her butt, are endless. Some media outlets have tried to figure out how much plastic surgery she’s had over the years.

And Kim and her sisters don’t shy away from this coverage. On their show Keeping Up With the Kardashians, the sisters talk openly about which looks they love and how they looked in photo shoots. They regularly discuss their diets and binge eating. After her son Saint was born in 2015, Kim set a very public weight loss goal and frequently tweeted updates on her progress. She once Snapchatted getting a tummy tuck, and of course there were articles about that too.

It’s all part of a never-ending cycle of attention and discussion around how Kim looks and how much she weighs. The Huffington Post even has an entire section devoted to the topic and follows every fluctuation (loss, gain, loss, gain):

It’s no secret that women’s bodies are judged (and expected to change) in ways that men’s aren’t. Famous women’s appearances are scrutinized in an even more intense and pretty gross way. The Kardashians’ appearances are the pinnacle of that scrutiny.

And to be fair, it’s a two-way street. Kim and her sisters have leveraged their looks — from talking about what makeup they’re using to posting the aforementioned tummy tuck on Snapchat to Khloe hosting a show called Revenge Body to Kylie Jenner giving an interview about her lip fillers, and, of course, Kendall Jenner building a successful modeling career — as part of their business.

I don’t have the calculus to quantify whether the media scrutiny over the Kardashians’ appearances is worth the business capital they’ve gained from it. (Kylie Jenner is reportedly on the verge of becoming a billionaire, thanks to her cosmetics line.) I wouldn’t argue with the notion that the constant scrutiny is part of the Faustian deal they’ve signed up for.

But the relationship the Kardashian sisters, including Kim, have to their bodies and to society’s standard of what their bodies should look like is not typical.

Understanding that, it’s easy to see how living up to those pressures manifests itself in equating thinness with beauty and beauty with worth. Kim joking about her weight isn’t especially different from the stomach flu joke in The Devil Wears Prada or Amy Schumer’s cracks about how everyone in Hollywood is starving. It’s also not that far removed from various people on Instagram or other kinds of social media posting about achieving their summer bodies or joking about it, ironically or otherwise.

With Kim and her sisters, though, the missing link is self-awareness. In her Instagram stories, Kim’s glibness about anorexia made a statement — regardless of her intentions or lack thereof — about thinness being more desirable than health, and reinforced the idea that beauty is worth harming yourself over.

What’s frustrating to her critics is that Kim has the power to change that conversation. Celebrities like superstar tennis player Serena Williams, celestial saint Beyoncé, and Lady Gaga have all talked publicly about their insecurities, body shame, and weight. They’ve seemed to understand the power they have to set an example for anyone who views them as a role model, and have made a concerted effort to push the conversation forward in a positive way.

If Kim Kardashian were to talk about how society affects the way she thinks of her body in addition to revealing the work it takes to maintain (she already often posts her workouts to Snapchat), it could be as powerful as the message she’s currently putting out there. It would be an equally newsmaking story as this anorexia mess. She is definitely famous enough to change the tone of the media scrutiny of her looks. But it’s not something she seems particularly concerned about right now — at least not on her Instagram.

A black 12-year-old was mowing a lawn. So someone called the police.
The “two dose” problem for Covid-19 vaccines, briefly explained
Nunes threatens to sue CNN for reporting on statement made by indicted Giuliani associate’s lawyer
North Korea is giving Biden the silent treatment
There are zero reasons why 13 Reasons Why’s third season should exist
How Melbourne eradicated Covid-19