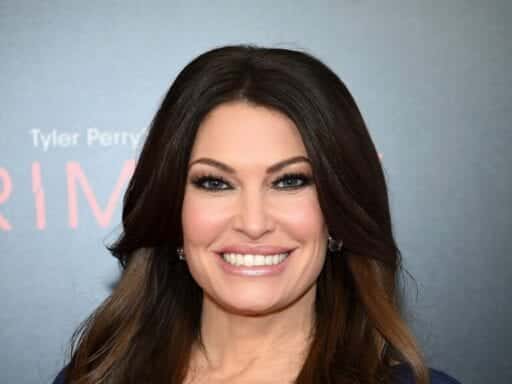 The former host of The Five, who’s dating Donald Trump Jr., may be joining a pro-Trump PAC.

A former Fox News host with ties to the Trump family is being accused of inappropriate behavior and sexual misconduct, including showing colleagues pictures of male genitalia.

Kimberly Guilfoyle, a long-time Fox News fixture, announced she was leaving the network last week. The former attorney is dating the president’s son, Donald Trump Jr., and CNN reported that she would accompany him on the campaign trail in 2018, and possibly join the pro-Trump PAC America First Policies.

But other reports suggested Guilfoyle’s departure from Fox was acrimonious, and allegations reported by HuffPost’s Yashar Ali indicate why.

According to HuffPost, Guilfoyle was forced out at Fox after an investigation into allegations of misconduct:

Six sources said Guilfoyle’s behavior included showing personal photographs of male genitalia to colleagues (and identifying whose genitals they were), regularly discussing sexual matters at work and engaging in emotionally abusive behavior toward hair and makeup artists and support staff.

Guilfoyle’s attorneys have challenged these accusations. The Daily Beast published a report suggesting the allegations were part of a “whisper campaign” against Guilfoyle, in which Fox employees were trying to plant stories about her and trump up the allegations to give the network a cover dismiss the host. The Daily Beast reports that the alleged “abuse” of makeup and support staff was actually a request for them to do makeup for a non-work-related event.

Both versions of the story pits Fox News against one of its formers stars. It also highlights the strange intersection between the network and President Donald Trump’s orbit. Fox is often called out for its frenetic devotion to the president — so much so that it’s news when its hosts breaks with the White House line.

Trump won’t tolerate any other cable network, and he’s staffed his administration with officials he’s pulled off the Fox News panel lineups or from the network’s old guard leadership, in the case of communications chief Bill Shine. He’s known to get informal advice from other network stars, from Sean Hannity to Lou Dobbs.

Guilfoyle’s relationship to Trump Jr. is another example of how intertwined Fox News and Trumpworld are. But these latest allegations against Guilfoyle add a bizarre twist to that story.

What’s going on with this Guilfoyle story?

Before joining Fox News in 2006, Kimberly Guilfoyle was a lawyer in San Francisco. Her ex-husband is California Lt. Gov. (and Democratic gubernatorial candidate) Gavin Newsom. On Fox News, she was a co-host of The Five.

Fox News confirmed last week that Guilfoyle was leaving the network with an abrupt statement: “Fox News has parted ways with Kimberly Guilfoyle.” The terse announcement came just after rumors had started that the host was preparing to leave the network — though it still wasn’t clear whether Guilfoyle had left on her own accord, or Fox had forced her out.

According to Vanity Fair’s Gabriel Sherman, Guilfoyle was under investigation for issues related to harassment, including allegedly pressuring other women at the network to defend former Fox News chief Roger Ailes against his own allegations of sexual harassment in 2016.

HuffPost elaborated on the allegations in its report on Friday, which suggested that Guilfoyle had been the subject of an investigation into her conduct that began sometime last year. Her rift with the network reportedly began during the scandal over former Fox News chief Roger Ailes’s sexual harassment, particularly around the lawsuit filed by former host Gretchen Carlson.

Guilfoyle called female on-air talent at Fox News in the summer of 2016 and asked them to make supportive statements about Ailes publicly, sources said. Five sources who said they received calls from Guilfoyle said she framed it as making a decision as to whether they were “Team Roger” or “Team Gretchen.”

A former assistant of Guilfoyle’s (who also worked for Eric Bolling, who left the network after his own #MeToo scandal) also claimed that her boss was “emotionally abusive” and talked about her sex life. Guilfoyle’s assistant “was desperate to get away from Kimberly, she kept on trying to find a way to get a new job or get reassigned within the network,” a source told the HuffPost.

An attorney for Guilfoyle, John Singer, denied these allegations to HuffPost, saying any accusations that she was “engaging in inappropriate work-place conduct are unequivocally baseless and have been viciously made by disgruntled and self-interested employee.”

“It’s utterly preposterous that there are those who are nefariously and greedily twisting innocent conversations amongst close friends into much more than what it actually was for financial gain,” the statement continued. “Kimberly has happily moved onto the next chapter of her life and hopes others will do the same.”

That denial also echoes a report published earlier this week from the Daily Beast that said Fox News was trying to discredit Guilfoyle. Four sources inside Fox told the Beast that Guilfoyle’s enemies were trying to plant negative stories about her being emotionally abusive and engaging in appropriate behavior as a “pretext” to dismiss her.

Fox News said any suggestion that they were involved in any campaign against Guilfoyle was “absolutely false.”

It’s not clear why Fox News, or employees within Fox, would want to discredit a star who’s dating the president’s son. And it’s unclear whether Guilfoyle dating Trump had anything to do with the tension at Fox News.

HuffPost suggests the rift had begun before the relationship became public, though sources told Vanity Fair that her romantic ties to Trumpworld had caused problems for the network. (She had previously been linked to Anthony Scaramucci.)

Guilfoyle had also been floated for a possible position within the White, including the job of press secretary, so perhaps it’s no surprise that she’d rather work directly in Trumpworld in some capacity rather than continue on Fox News. And, so far, there’s no Fox News scandal big enough to stop someone’s career in the White House.

“Human capital stock”: White House adviser Kevin Hassett uses dehumanizing term for US workers
Democrats used their impeachment questions to call out Trump’s lies and sexual misconduct
VSCO girls and how teen culture goes viral
John Brennan: Trump revoked my clearance to scare others “into silence”
The Trump administration admits there’s no timeline for North Korea to give up its nukes
Knowing why we age could help us learn how to live forever. Do we want to?