Know your rights: The biggest threat to voting is not knowing the rules 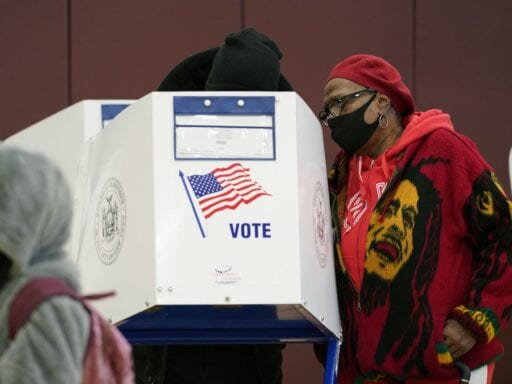 Share
Loading...
A poll worker helps a voter cast a ballot in person on the last day of early voting in New York, November 1, 2020. | Kathy Willens/AP

Here’s what you need to know about voting in person. First step: Don’t panic.

Most Americans are going to have a very uneventful voting experience. You’ll wait in line for less than half an hour and vote without any real disturbance. Maybe you’ve already mailed in your ballot or are planning to drop it off. (Reminder: It’s too late to safely mail in your ballot in almost every single state.)

The news is full of stories about the threat of voter suppression. From stories about long lines in Georgia and New York to President Donald Trump’s repeated comments directing his supporters to go to the polls and “watch very carefully,” Americans are being inundated with warnings about attacks on voting rights. And it’s true that there are places where it’s harder to vote and that various lawsuits are making their way through the courts that could restrict voting access.

In some cases, the barriers may be extreme: As my colleague Matthew Yglesias reported, “Police officers in Graham, North Carolina, used pepper spray on a peaceful crowd participating in a Black Lives Matter ‘march to the polls’ event Saturday. Witnesses in North Carolina reported gas was turned on a crowd including children and the elderly.”

But of real concern, too, is that voters consuming this information are overrating the likelihood of experiencing threats at the polls and underrating less scary (and more insidious) things they could face. None of this is to wave away the fact that there are real threats to democracy, but the most subtly effective form of voter suppression depresses turnout through apathy and fear.

If voters believe it’s too difficult to vote, that they’re not eligible even if they are, or that they’ll face undue pressure at the ballot box because of events that are unlikely to affect them, that’s a win for people who don’t want you to vote. And they didn’t even have to put in the effort to actually pass a law or show up with firearms at your polling location. They just had to scare you.

Myrna Pérez, the director of the Brennan Center’s Voting Rights and Elections Program, told me a story from her law school days: “I will never forget when I was a law student and I was trying to register people to vote someone would say, ‘No, I can’t register, I’m on probation.’” But at that time, people on probation weren’t restricted from voting. “I was just upset and shocked that people would be wrong about something like that.”

So the best way to protect your rights is to be prepared. You need to know what is required in your state and what legal protections you have. Vox talked to voting rights experts about what voters should be prepared for at the polls and how to respond in the unlikely case something untoward happens. One thing up front: If you need assistance for any reason before or during voting, you should call 1-866-OUR-VOTE (866-687-8683), a national nonpartisan election protection hotline.

“For most people, the biggest barrier is knowing what the rules are,” Deuel Ross, senior counsel at the NAACP Legal Defense and Educational Fund, told Vox. “Depending on the state you live in, voting is difficult.”

Ross urges voters to double-check your polling place and make sure you know what identification is needed before you head to the polls. He pointed us to the National Conference of State Legislatures (NCSL), which has a handy map showing exactly what ID your state requires.

Many states restrict various forms of expression in an effort to maintain order and efficiency at the polls. It’s unlikely that these rules would be enforced in a way that could undermine your ability to cast a ballot, but violating them might mean a bit of a headache (whether it’s a fine or a request that you return wearing something else).

With the rise of the cellphone camera came the invention of the ballot selfie, but the law is still catching up. Vox has a state-by-state guide for which states restrict the practice, but at least 14 states consider it illegal to take a photo of your ballot and allow others to see it.

As Terry Nguyen has reported for Vox, be careful what you wear when you show up to vote:

Most states have laws that prohibit “electioneering,” or engaging in activities that support a political candidate or party near polling places. Thus, wearing a political shirt is interpreted as a political act, and could prevent you from casting your ballot that day. …

The Washington Post reported that some voters in Georgia and Tennessee have been challenged by poll workers for wearing Black Lives Matter apparel to vote early…And while poll workers are expected to be nonpartisan, there could be inconsistencies as to what counts as “political” among these volunteers, who only receive brief training.

Generally, Nguyen reports, if you’re not wearing something that explicitly indicates a vote for a candidate (like a MAGA hat or a Biden sweatshirt) you should be fine. If you feel the rules aren’t being fairly applied to you and that you’re being restricted from casting your ballot, call 1-866-OUR-VOTE to get assistance.

Every American has federal voting rights protections, thanks to the 1965 Voting Rights Act (VRA) and the 1990 Americans with Disabilities Act (ADA).

The VRA includes protection from racial discrimination at the polls and bans on literacy tests. Ross explains that, over the years, while the use of discriminatory tactics like poll taxes and literacy tests has waned, VRA protections have been enforced in response to voter ID laws and witness requirements which have been shown to have “discriminatory effects on Black and Latinx voters” and therefore violate the VRA.

The law also requires that any voter requesting assistance due to blindness, disability, or illiteracy must be given assistance and requires that voters have discretion in picking who they want to help them.

There are specific counties, outlined in the VRA, that are required to provide assistance in different languages. The Elections Assistance Commission has outlined them all; check your county’s requirements here. If your county does not have the assistance you need, call the voter protection hotline in your preferred language:

Voters with disabilities frequently face difficulties when voting or registering to vote. According to Syracuse University’s Burton Blatt Institute, the 1984 Voting Accessibility for the Elderly and Handicapped Act “required polling places in federal elections to be physically accessible to people with disabilities, and if no accessible location is available, an alternative method of casting a ballot on Election Day must be provided.” Six years later, the ADA “extended protections to state and local elections.” There are specific requirements that polling places must meet in order to be deemed accessible under the ADA, yet in 2016 “two-thirds of 137 polling spaces inspected … had at least one impediment to people with disabilities.”

For people with cognitive disabilities, the ACLU affirms that they “cannot be turned away from the polls because a poll worker thinks they are not ‘qualified’ to vote.”

If you end up casting a provisional ballot, the NCSL details each state’s process and the most likely reasons your ballot could be rejected:

If you cast a provisional ballot, each state is required to give you either a toll-free number or a website where you can check to see if your ballot was counted and, if not, the reason why.

Voter intimidation is illegal. The Voting Rights Act and various state statutes ban individuals from threatening or coercing you at the polls or while registering to vote.

Intimidation can come in many forms. Georgetown University’s Institute for Constitutional Advocacy and Protection lists several behaviors that would “likely constitute illegal voter intimidation” including:

Violent behavior inside or outside the polling site
Confronting voters while wearing military-style or official-looking uniforms
Brandishing firearms or the intimidating display of firearms
Disrupting voting lines or blocking the entrance to the polling place
Following voters to, from, or within the polling place
Verbal threats of violence
Aggressively approaching voters’ vehicles or writing down voters’ license plate numbers
Harassing voters, aggressively questioning them about their qualifications to vote

If you see any of these behaviors, document what you’re witnessing and contact your local election officials as well as the voter protection hotline.

“You have the right to vote. Period,” says McGrath. “And there are people to help you cast your ballot if you need help.”