Kurt Volker, impeachment witness requested by Republicans, debunks many of their arguments 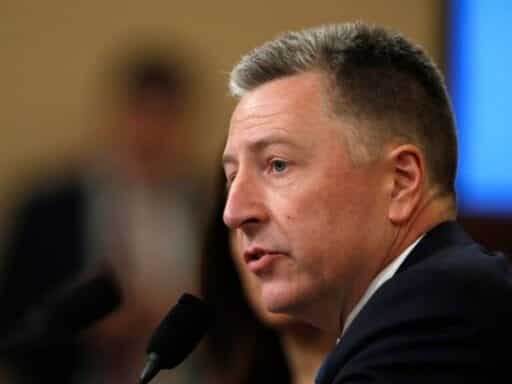 He said that he didn’t believe Joe Biden was corrupt, and that he regrets the push for investigations.

When House Intelligence Committee Democrats offered Republicans the opportunity to suggest impeachment inquiry witnesses, Kurt Volker — the former US special representative to Ukraine — made the list.

And yet in his opening statement Tuesday, Volker made a number of points that seemed quite bad for the case President Donald Trump’s defenders are trying to build.

For one, Volker said that “the accusation that Vice President [Joe] Biden acted inappropriately” with regard to Ukraine “did not seem at all credible to me” — contradicting Trump’s unsupported insistence that Biden acted corruptly in helping push out Viktor Shokin, a Ukrainian prosecutor whom the administration and American allies considered corrupt.

Volker also said that, previously, he drew a distinction between investigating Burisma (the Ukrainian gas company Hunter Biden sat on the board of) and the Bidens. He understood Trump officials were pushing for investigations into Burisma, which he considered appropriate. But “in retrospect, I should have seen that connection differently” — admitting it was inappropriate and “unacceptable,” and targeted at the Bidens.

And Volker said that former Ukrainian prosecutor general Yuri Lutsenko, who has made allegations about the Bidens’ corruption that Rudy Giuliani promoted, isn’t credible. Indeed, Volker even said that he told Giuliani this in private — and that Giuliani agreed. All this debunks a counter-narrative pushed by Trump’s allies, in which the President was legitimately concerned about corruption in Ukraine.

The GOP may have wanted to call Volker because, in his initial testimony, he said he did not know of any linkage between nearly $400 million in withheld military aid for Ukraine with the investigations that Trump was demanding.

However, Volker says in his new opening statement, “I have learned many things that I did not know at the time of the events in question.” By that, he seems to be referring to Sondland’s recent admission that he did, in fact, tell the Ukrainians the aid was linked to the investigations.

Volker had also previously testified that a White House meeting on July 10 between US and Ukrainian advisers was uneventful. But other witnesses testified that Sondland brought up “investigations” in front of the Ukrainians, National Security Adviser John Bolton abruptly ended the meeting. Afterward, some participants moved to a different room (the Ward Room), and Sondland again asked the Ukrainians about investigations.

Now Volker says he recalls some of that: “Ambassador Sondland made a generic comment about investigations,” he said. “I think all of us thought it was inappropriate.” (However, he says that he still doesn’t recall Sondland asking the Ukrainians again about investigations in the Ward Room. “I may have been engaged in a side conversation, or had already left the complex,” he said.)

You can read Volker’s full opening statement at this link.

A top Pentagon official severely undercut a Trump impeachment talking point
Ghosts, witches, zombies: which supernatural creature makes the most money at the box office?
“You can’t scare a virus”: World War Z author Max Brooks on pandemics, fear, panic, and hope
156 countries are teaming up for a Covid-19 vaccine. But not the US or China.
New York Archdiocese names 120 clergy with ‘credible’ sex abuse allegations
Trump wants to change how poverty is calculated — to make fewer people eligible for benefits