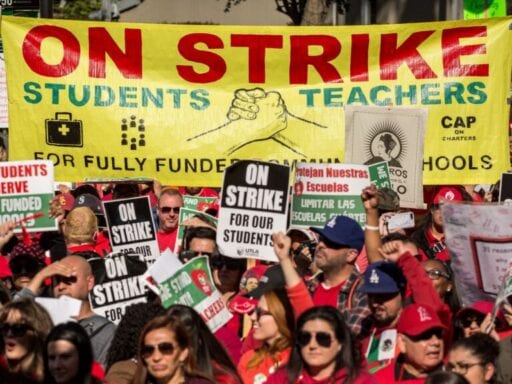 The organizer, scholar, and writer gives a master class in political organizing on The Ezra Klein Show.

The Bernie Sanders campaign is an organizing tour de force relative to the Joe Biden campaign, yet the latter has won primary after primary — with even higher turnouts than 2016. So does organizing even work? And, if so, what went wrong?

To get a sense of how to answer these questions, I sat down with the scholar, writer, and organizer Jane McAlevey on The Ezra Klein Show. McAlevey has organized hundreds of thousands of workers on the front lines of America’s labor movement. She is also a senior policy fellow at UC Berkeley’s Labor Center and the author of three books on organizing, including, most recently, A Collective Bargain: Unions, Organizing, and the Fight for Democracy.

McAlevey doesn’t pull her punches. She thinks the left builds political power all wrong. She thinks people are constantly mistaking “mobilizing” for “organizing,” and that social media has taught a generation of young activists the worst possible lessons. She thinks organized labor’s push for “card check” was a mistake but that there really is a viable path back to a strong labor movement. And since McAlevey is, above all, a teacher and an organizer, she offers what amounts to a master class in organizing, one relevant not just to building political power but to building anything.

To McAlevey, organizing, at its core, is about something very simple and very close to the heart of this show: How do you talk to people who may not agree with you such that you can truly hear them, and they can truly hear you? This conversation ran long, but it ran long because it was damn good.

What is the difference between advocacy, mobilizing, and organizing?

In the advocacy model, people aren’t really central to the solution. Instead, you have lawyers, public opinion researchers, and a full-time staff in Washington, DC. Greenpeace is an example. If you’re concerned about the planet, you write a check to Greenpeace and they’re going to take care of the problem for you. That’s advocacy.

Then you move to the difference between mobilizing and organizing. It’s the difference between these two that I think most of the progressive movement is deeply confused about. Mobilizing is essentially doing a very good job at getting people off the couch who largely already agree with you. In the mobilizing model, you may be involving people in very large numbers, but the limitation of the mobilizing approach is that you’re only talking to people who agree with you already.

Organizing, which I put the highest value on, is the process by which people come to change their opinions and change their views. Organizing is what I call “base expansion,” meaning it’s expanding either the political or the societal basis from which you can then later mobilize. What makes organizing different than all other kinds of activism is it puts you in direct contact every day with people who have no shared political values whatsoever. When you’re a union organizer, you get a list of let’s say a thousand employees and you’ve got to figure out how to build to 90 percent or greater unity with unbreakable solidarity and a tight, effective structure. So, essentially every single trade union unionization campaign I’ve negotiated is an experiment in how you build political unity in a time of intense polarization.

I’m interested in your thoughts on the 2020 Democratic primary. My observation is a lot of people in the Sanders campaign thought they were doing organizing when they were doing mobilizing. This is not to say anything good about the Biden campaign, which I think just skated by. But there seems to me to be a real distinction between the personality type and the temperament and the strategies of a mobilizer versus an organizer. And it seems to me that not only in the Sanders campaign but all over politics — and especially on social media — I see people acting in ways that wouldn’t be conducive to organizing.

Mobilizers tend to be activists. They’re better engaging a self-selected crowd of people who exist in some bubble. When I’m looking for organizers, I’m looking for people who genuinely believe that ordinary people have high intelligence and who really deeply respect ordinary people. I start out every day genuinely believing that people can make radical changes in how they think about and see the world. And that means you have to be willing to work with them, even if their views are fairly different than your own.

Almost every worker in a campaign I’ve worked on starts out with values that seem pretty different than mine. But you have to respect where they’re coming from, what shaped them, how they got there, and then have a theory of how to help them shift from maybe having the wrong idea of who’s to blame for the pain in their lives. They might be blaming Mexican immigrants for stealing their jobs instead of the CEOs of corporations that directly facilitated the departure of their job. And if you can’t look at them and imagine where they might be based on the fact that most people want to have clean water, a safe planet, a decent job, nice neighbors, and fairness, then you’re not going to be a good organizer.

One of the things that strikes me about your mobilizing-organizing distinction has to do with the fact that for each one there are different incentives around disagreement. When faced with disagreement, do you escalate or do you somehow find a way to synthesize or get around it? So, walk me through a typical interaction with a worker, specifically one who may disagree with you.

When I start a conversation with a worker, I’m going to start by telling them exactly why I’m there. There’s no bullshitting: I’m here because coworkers of yours called up and they’re in and figuring out how you can make things better in the workplace. That’s it. I’m being very honest about why I’m on your door. The very next thing I’m going to do is ask them a question: If you could change three things at work tomorrow, what would they be?

This question is going to give me immediate insight into your human priorities. So, when I later find out that we may have very different political views, it doesn’t really matter to me. If I know the three things that matter most to you about the workplace that you want to change, I’m sticking with that conversation the whole way through it. And I’m gonna help you understand who is in the way of fixing that problem and how only you and your coworkers can actually fix it.

Let’s say a nurse says to me “I’m exhausted every day. I love my job in the ICU so much. But I’m so frustrated I can’t get my job done. We need more staff on the floors.” I don’t know if she’s Republican, a libertarian Democrat, Green Party, or has never voted in her life, but when she tells me that I’m off and running. The thing I’m gonna ask her is, “Given how much profit your employer had last year, why do you think you’re working so short on the floors in the hospital?” The whole point of organizing is I’m never going to tell her what the answer is. I’m going to just start framing a series of questions that are going help that nurse begin to understand why it is she works for a filthy rich employer and why it is she can’t get her job done. And it’s gonna be pretty crystal clear.

The Paris agreement is five years old. Is it working?
The End of Policing left me convinced we still need policing
Migrant detention center: Not much room for kids to play in the warehouse-like facility
Conservatives pretending to be suppressed by social media dominated social media
An EPA children’s health official says Trump wants to “disappear” her office
Postmaster General Louis DeJoy promises to prioritize mail-in ballots, but questions about delays re...