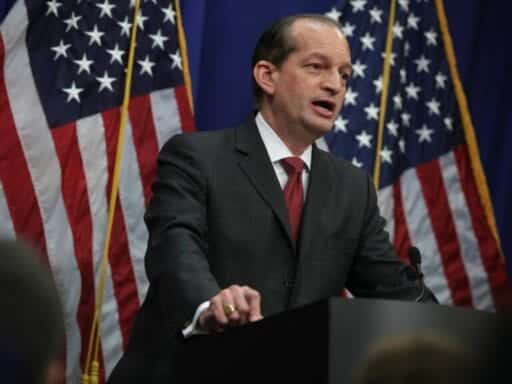 He offered unsatisfying defenses of his handling of the Epstein case in a Wednesday press conference.

It was a different time.

That was one of the defenses offered by US Labor Secretary Alexander Acosta at a press conference Wednesday to address the deal his office gave in 2008 to money manager Jeffrey Epstein, who is accused of sexually abusing dozens of underage girls.

Despite the number and seriousness of the allegations, Epstein ended up serving just 13 months in a county jail, thanks to a non-prosecution agreement signed with the office of the US Attorney for Miami, Acosta’s job at the time. Criticism of that deal has been mounting since Julie K. Brown reported on it in the Miami Herald last year, and has reached a fever pitch since Epstein was arrested on new sex trafficking charges in New York this week.

Lawmakers including House Speaker Nancy Pelosi have called on Acosta to resign.

But on Wednesday, Acosta essentially said that the deal was the best his office could do because in a time before #MeToo, Epstein’s defense attorneys would have been able to smear his accusers if the case had gone to trial. “Today’s world treats victims very, very differently,” he said.

He also cast the deal as the best shot law enforcement had at sending Epstein to jail and “put[ting] the world on notice” that he was a sex offender. But as reporting by Brown and others has shown, both those penalties were close to meaningless in Epstein’s case.

All told, Acosta’s appearance on Wednesday left many questions unanswered, including the biggest one: why someone who let Epstein get away with a light sentence should remain in charge of an office that deals with human trafficking cases.

Things were different in 2008

Acosta argued that when his office was dealing with the Epstein case more than a decade ago, juries lacked an understanding of how trauma impacts people, and it was easier for defense attorneys to use inconsistencies in survivors’ accounts to smear and discredit their testimony. Acosta’s team was worried this would happen to the women accusing Epstein of abuse if the case went to trial, he said. “Today’s world does not allow some of the victim-shaming that could take place at trial 12 years ago,” he explained.

It’s true that the public has a better understanding of the trauma of sexual abuse now than in 2008, in part because of the many people who have told their stories publicly as part of the #MeToo movement. But as CNN’s Kara Scannell has reported, Acosta’s office appears to have prosecuted other, less high-profile offenders than Epstein far more aggressively at around the same time, and obtained significant sentences for them that included prison time.

When I asked if he would make the same deal today, Acosta said today’s world treats victims “differently.” But this from @KaraScannell shows how that deal differs from other sex trafficking cases brought under him, which didn’t involve dozens of victims.https://t.co/8XGtbtCLw7 pic.twitter.com/MByGiojnwJ

Acosta repeatedly mentioned the importance of finding a way to send Epstein to “jail” rather than “rolling the dice” with a trial and risking the possibility that he might go free. “The purpose in this case was to bring Epstein to jail, to put him behind bars,” he said.

Acosta avoided using the word “prison,” because unlike with some of the other sex crimes cases his office prosecuted, Epstein didn’t go to prison — he served his time in a county jail facility. He was also allowed to leave the facility on “work release” to go to an office for multiple hours per day, six days a week, raising the question of how meaningful his jail sentence really was.

Acosta also talked about the importance of making sure that Epstein registered as a sex offender. “The world needed to be on notice that he was a sexual predator,” he said.

Epstein was indeed required to register in New York and the US Virgin Islands, where he has homes, but not in New Mexico, where he also has a residence. His registration also did not prevent him from extensive international travel — or, apparently, from amassing a trove of nude photos of seemingly underage girls at his home in New York.

Epstein’s own comments show how seriously he took the requirement to register. “I’m not a sexual predator, I’m an ‘offender,’” he told the New York Post in 2011, shortly after the end of his jail term. “It’s the difference between a murderer and a person who steals a bagel.”

It was somebody else’s fault

At the press conference, Acosta put the blame on state authorities for some aspects of the Epstein case, including the fact that Epstein served only 13 months of what was initially supposed to be an 18-month sentence, and that he was allowed out on work release. Acosta said these terms of the sentence were the purview of the state court in Florida and his office never expected Epstein to be allowed out on work release. Presumably, however, Acosta’s office had dealt with state courts in the past and could have factored in the various possibilities when negotiating the agreement in the first place.

Acosta also addressed another much-criticized aspect of the deal: that victims were not notified of its existence until it was too late for them to object. The secretary said this had to do with the potential for monetary restitution for victims. Prosecutors in his office became concerned that if they notified victims too soon, and the deal fell through, Epstein’s lawyers would use the fact that victims had been offered money as a way to discredit them. The Labor Department has provided reporters with statements from an FBI agent and career prosecutor at the time that corroborate this rationale.

It was not clear from the press conference whether any victims have actually received restitution as a result of the non-prosecution agreement.

No one is disputing that Jeffrey Epstein had extremely powerful lawyers who put pressure on victims and prosecutors alike. They were no doubt formidable adversaries. But it was part of Acosta’s job as US attorney to stand firm against formidable adversaries. In his press conference on Wednesday, Acosta did not make a compelling case that he did that where Epstein was concerned.

Today, Acosta is in charge of the US Department of Labor, which deals with, among other things, special visas for survivors of human trafficking. Catherine Rampell of the Washington Post has reported that under Acosta, the Labor Department is slow-walking the certification of these visas, making it harder for survivors to come forward — and for some adding to the danger of deportation before their paperwork goes through.

At the press conference, Acosta argued that it was a “mischaracterization” to say his office was moving away from certifying the visas, and that survivors would still be able to get them. But his responses on the Epstein case left one big question hanging: Why should someone who let a sex offender all but walk free hold a position in the US Cabinet that could place the lives of trafficking survivors in his hands?

Maria Butina, explained: the accused Russian spy who tried to sway US politics through the NRA
The debate around putting an end to all government shutdowns, explained
Twitter’s top policy exec said there’s “no doubt” that some social media content contributes to radi...
A charity dropped a massive stimulus package on rural Kenya — and transformed the economy
Trump asked Don McGahn to publicly state he didn’t obstruct justice. McGahn refused.
The Supreme Court will hear a new attack on unions. The implications are profound.