Lady Gaga pegged her powerful Women in Hollywood speech to her suit. She didn’t need to. 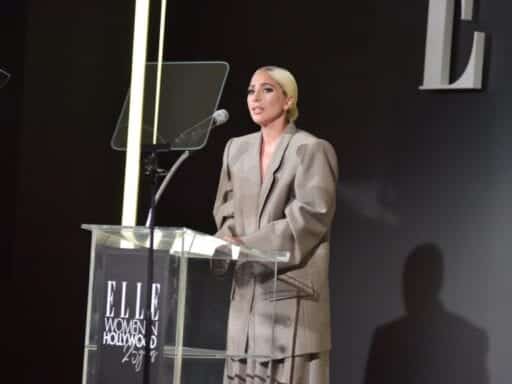 The suit wasn’t the empowering part — her words were.

Lady Gaga was honored as one of Elle’s Women in Hollywood Monday night, yet her acceptance speech wasn’t about her film acting debut in A Star Is Born, the critically beloved movie that’s already garnering pretty serious Oscar buzz.

Instead, she began her speech with what she was wearing while giving it: an oversize, shoulder-padded Marc Jacobs suit.

Gaga explained that when she was getting ready for the event, she tried on “one tight corset after another, one heel after another,” and suddenly felt sick to her stomach. She continued:

So, after trying 10 or so dresses, with a sad feeling in my heart, that all that would matter was what I wore to this red carpet, I saw an oversized Marc Jacobs suit buried quietly in the corner. I put it on to a resounding view of eyes glaring at me in confusion. But the Rodarte was so beautiful! one said. But the Raf Simons for Calvin Klein was so stunning on you! said another. But what about the Brandon Maxwell? What about the Dior? Lots of questions. They were all dresses. This was an oversized men’s suit made for a woman. Not a gown. And then I began to cry. In this suit, I felt like me today. In this suit, I felt the truth of who I am well up in my gut. And then wondering what I wanted to say tonight become very clear to me.

As a sexual assault survivor by someone in the entertainment industry, as a woman who is still not brave enough to say his name, as a woman who lives with chronic pain, as a woman who was conditioned at a very young age to listen to what men told me to do, I decided today I wanted to take the power back. Today I wear the pants.

The speech, which can be read in full here, was an incredibly powerful and moving display of a kind of vulnerability we’re not yet used to seeing from Gaga. In it, she discussed the PTSD and fibromyalgia that came as a result of a sexual assault she survived at 19 and subsequently hid from for years, and how she wanted to use her platform to speak out for equality and against injustice.

She also talked about Hollywood beauty standards and fashion, saying that women in Hollywood “are not members of a giant beauty pageant meant to be pit against one another for the pleasure of the public.”

It was a statement that would not have been quite as curious had it come from a different kind of celebrity: one who hadn’t already spent a large portion of her career upending Hollywood fashion standards by arriving to events in giant eggs, concealing her face with red lace or elaborate headdresses, or doing interviews wearing a coat made of dozens of Kermit the Frogs.

Menswear-inspired suits for women are not particularly new, nor are they particularly transgressive in 2018. Women have been wearing suits for more than 100 years, and they’ve been a major red-carpet trend for celebrities over the past decade. And often, menswear worn by women has the effect of enhancing the femininity of the wearer rather than conveying true androgyny.

And Lady Gaga, of course, knows all of this.

As feminist scholar Laura Portwood-Stacer notes, “[Gaga’s] career has always demonstrated that she understands celebrity and image culture probably better than anyone else.” The event was certainly not the first time she’s worn a suit to an event, nor is it the first time she’s channeled a masculine aesthetic (she had a drag alter ego, Jo Calderone, between 2010 and 2011).

Gaga’s look at the event, meanwhile, was both on trend and not particularly masculine. It wasn’t the kind of fitted suit seen on celebrities like Blake Lively or Cara Delevingne recently; in fact, at first, plenty of people on Twitter made jokes about it being cartoonishly oversized. But regardless, her styling — the dark makeup, the elegant bun, the plunging neckline, the ’80s-inspired silhouette — was sexy and current, and has been a pretty common red-carpet fixture in recent years.

“By itself, the image of Gaga in the suit doesn’t break too many rules,” Portwood-Stacer explained to The Goods. “It might be slightly unexpected, but from the way she’s styled, and the fact that the suit is made by a well-known designer, we know that she is still operating within most of the rules of the celebrity fashion system. The only thing that anchors this look as a meaningful act of resistance is the accompanying statement.”

It was the speech, not the suit, that was powerful. But for a celebrity who has worn a literal meat dress to protest the US military’s “don’t ask, don’t tell” rule, the choice to imbue a Marc Jacobs design with so much meaning feels strange.

Part of that may have to do with Gaga grappling with her new identity as an actress. In recent profiles, writers have described the ways A Star Is Born director and lead actor Bradley Cooper attempted to strip away Gaga’s pop star persona in an effort to make her more “open” and without “artifice,” in one case literally wiping the makeup off her face. In the film, her character Ally is a singer who works at a restaurant, though she’s on the brink of giving up on her dreams to become the former. She wears minimal makeup, her grown-out hair is an unremarkable shade of brown, and her wardrobe is suitable for someone with her job description — all of which is to say she’s nothing like the Gaga we’ve come to know.

While promoting the film on its press tour, too, Gaga has channeled a spirit and an aesthetic that has much more in common with the traditional breakout actress than the rotating cast of eccentric characters she has performed throughout her career. She’s worn long, ornate dresses with an old-Hollywood feel. Even though she’s worn similar looks in the past, over the course of the tour she’s been more vulnerable and more open than ever, the Elle speech included.

I asked Portwood-Stacer about the idea of fashion ever being truly transgressive, and what happens when we assign meanings of empowerment to articles of clothing. “I definitely think ‘empowerment’ gets thrown around way more than is warranted when it comes to fashion, lifestyle, and consumption choices,” she said. “I don’t question the idea that Gaga herself felt empowered to choose this look, and that the choice then empowered her to speak her truth about her experience.”

But did it give her, a famous, wealthy white woman, a platform or any amount of power that she didn’t already have? Probably not. Does it give other girls and women any more power to be safe from misogyny and sexual assault? Almost certainly not. Fashion is, by nature, symbolic. Its power of transgression therefore usually remains in the realm of the symbolic. This isn’t to discount the value of images and speech that go against the status quo, but they don’t usually bring about material change to power structures in themselves, and it would be great if fashion critics recognized this and helped their readers to understand it as well.

It’s a paradox that arises every time a celebrity attempts to make a political or cultural statement with their clothing. No one can argue whether or not a style choice has personal significance; that power lies within the wearer. But the choice to wear a menswear-inspired suit rather than a dress isn’t intrinsically empowering when it’s worn by a celebrity. And for the most part, neither is anything else. What was important about Gaga’s speech Monday night wasn’t what she wore but what she said — her speech resonated because this time, her message was louder than her clothes.

Why the government shutdown finally ended
Fat Bear Week 2019: Choose the fattest brown bear in Katmai National Park, Alaska
Walmart is doing more to stop gun violence than Congress is
Amazon will let you pay with your palm in some Whole Foods stores
Lovecraftian horror — and the racism at its core — explained
Trump’s misleading tweet about changing your vote, briefly explained