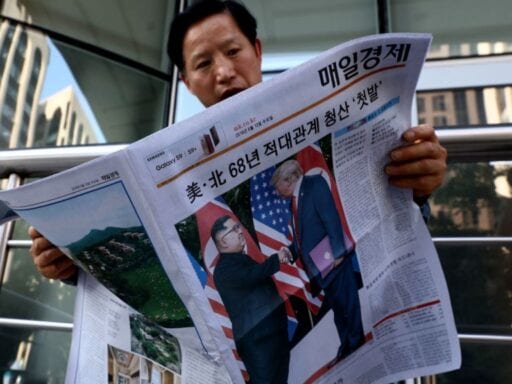 Let’s just say it looks like North Korea is lying about giving up its nukes.

Numerous news reports came out over the weekend with evidence from US intelligence agencies that North Korea is increasing the production of nuclear fuel at secret sites, expanding improving its missile capabilities, and has no intention of dismantling its nuclear arsenal.

Yet it seems like the Trump administration is either unaware of or is simply ignoring what US intelligence agencies are saying. On CBS’s Face the Nation on Sunday, National Security Adviser John Bolton said the US could dismantle North Korea’s nuclear program in a year’s time.

That seems unlikely because Pyongyang’s arsenal is quite advanced — and, as all these recent news reports suggest, the country is only improving that weapons stockpile.

The question now is whether the Trump administration will continue to believe North Korea is on the verge of dismantling its hard-won nuclear program or whether they’ll return to a more confrontational approach to Pyongyang.

If you missed any of the weekend’s developments because you were watching the World Cup or simply wanted a politics-free weekend, don’t worry. We’ve got you covered.

North Korea is lying to the US about its nuclear program

According to NBC News last Friday, Pyongyang continues to improve its nuclear program, even though President Donald Trump believes it’s reversing those advancements.

Kim Jong Un’s regime continues to enrich uranium at secret, undisclosed sites — including in at least one nuclear facility it has kept from the world. “This is huge, if true,” Susan Rice, President Barack Obama’s last national security adviser, tweeted on Saturday. North Korea “has a secret, third nuclear facility. They have been hiding it.”

That would only make it harder to prove North Korea actually wants to dismantle its nuclear program. Even if Pyongyang agreed to let nuclear inspectors into the country, those officials can’t inspect what they don’t know exists. In other words, unless North Korea comes clean about what nuclear sites it actually has, there’s no way to be sure if Pyongyang actually stopped improving its nuclear weapons program.

As of now, North Korea has only disclosed one main site: the Yongbyon nuclear research center. The problem is the regime continues to improve that site too, as the North Korea-focused website 38North noted last month.

The US is also aware of a secret uranium enrichment site known as Kangson, the Washington Post reported on in May. That means American intelligence is aware of least three nuclear-related sites in North Korea, two of which the Kim regime wanted to keep secret.

But that’s not all. As the Wall Street Journal reports, North Korea is expanding a missile-building plant. Using research from Middlebury Institute of International Studies based on satellite imagery, it turns out Pyongyang nearly completed its expansion project around when Trump met with Kim in June.

As the Diplomat noted on June 30, North Korea continues to make equipment and launchers for one of its newer, medium-range missiles. That would only help Kim better strike targets like Japan, a staunch US ally.

North Korea promised Trump that it would no longer test any more nuclear bombs or missiles, but clearly Kim doesn’t mind continuing to improve them.

All of that points to one conclusion: North Korea lied about its nuclear program — and its intentions to dismantle it — to keep extracting concessions from the US. “Work is ongoing to deceive us on the number of facilities, the number of weapons, the number of missiles,” an unnamed senior intelligence official told NBC News.

That plan may have already worked. Last month, Trump canceled a key military exercise with South Korea, one of America’s top allies. Pyongyang certainly liked that since it claims the joint drills are both a pretext and rehearsal for a US-led invasion of North Korea. After Trump met with Kim in Singapore on June 12, the president decided he wanted to stop what he calls “war games” in order to lower the tension.

“Consistent with President Trump’s commitment and in concert with our Republic of Korea ally, the United States military has suspended all planning for this August’s defensive ‘wargame,’” Dana White, the top Pentagon spokesperson, said in a June 18 statement.

What makes the decision even more surprising is that US intelligence agencies are pretty unanimous on one crucial point: North Korea will not give up its nuclear weapons program.

North Korea likely won’t give up its nuclear weapons program

US intelligence has continued to collect information even after the Trump-Kim summit last month. As of now, intelligence officials assess that North Korea is unlikely to dismantle its nuclear weapons program completely.

That adds to a report by the Defense Intelligence Agency, a Pentagon spy agency, which concludes North Korea hopes to hold on to some of its stockpile, purposefully hiding parts of it from the United States and others.

That’s a key point: Experts have noted for decades that the North Koreans consider nuclear weapons as key to the regime’s survival by deterring a foreign invasion. But Trump has continuously claimed since meeting with Kim that the North Korean leader has agreed to denuclearize.

At a June 20 rally in Duluth, Minnesota, for example, Trump bragged that he extracted a major concession from Kim, as outlined in the first sentence of the joint agreement the two men signed at the end of the summit: “Sentence one says ‘a total denuclearization of North Korea,’” Trump said. “There will be denuclearization. So that’s the real story.”

But South Korea doesn’t actually have its own nukes. What it does have is what’s called the US “nuclear umbrella.” That basically means that the US promises to defend South Korea from the North — up to and including with the use of US nuclear weapons. There are 28,500 US troops currently stationed in South Korea to defend it from potential aggression from the North.

But let’s be clear: Those who spy and analyze North Korea for a living believe North Korea won’t give up its nuclear weapons. And it seems that Trump, the main recipient of the US intelligence community’s assessments, has yet to internalize that information.

One would think that could lead the administration to make poor judgments about what kind of nuclear deal is actually possible with North Korea.

“We can get physically we would be able to dismantle the overwhelming bulk of their programs within a year,” Bolton told host Margaret Brennan.

Like @KingstonAReif I just keep watching this over and over again with a pit in my stomach that this will all end very very badly. https://t.co/ykXdeWV0gf

Here’s why: As already discussed, North Korea has yet to disclose where all of its nuclear, chemical, and biological weapons sites are — and it’s unlikely that North Korea would dismantle its nuclear program anyway.

But Bolton’s comment stands out for two other reasons. First, Siegfried Hecker, one of the top experts on North Korea’s nuclear program, wrote a report in May that says it would take around 15 years to disarm Pyongyang — significantly longer than Bolton’s one-year timeline. “We’re talking about dozens of sites, hundreds of buildings, and thousands of people,” Hecker told the New York Times in May.

And second, Pompeo, who leads negotiations with North Korea, has refused to set a deadline for when Pyongyang must dismantle its nuclear program.

“I am not going to put a timeline on it, whether that’s two months, six months, we are committed to moving forward in an expeditious moment to see if we can achieve what both leaders set out to do,” he told CNN on June 25, just one week before Bolton’s comments. However, Pompeo previously said that he would like to see North Korea completely dismantle its program within 30 months.

It looks like the national security adviser, though, went further than other Trump officials.

It’s unclear why Bolton would make such a controversial North Korea statement, but it’s not the first time he’s done so. In May, Bolton said the administration wanted North Korea to abandon its nuclear weapons program just like Libya did.

North Korea bristled at that, as the absence of nuclear weapons is part of the reason Libya’s former dictator Muammar Qaddafi couldn’t stop an uprising that eventually led to his brutal death.

“It is absolutely absurd to dare compare the DPRK, a nuclear weapons state, to Libya, which had been in the initial state of nuclear development,” a top Pyongyang official stated in response to Bolton’s Libya comments, using the acronym for the official name of North Korea. “We shed light on the quality of Bolton already in the past, and we do not hide our feelings of repugnance toward him.”

That animosity led Trump to cancel the summit with Kim, only to reschedule it a week later.

Pompeo will travel to Pyongyang for the third time later this week and reportedly will outline a proposed schedule for North Korea’s disarmament. The plan, according to a New York Times report on Sunday, is for North Korea to declare all parts of its nuclear weapons program — bombs, missiles, production sites — before the US lifts any economic sanctions off the country.

Another part of the proposed plan, it seems, is for Pyongyang to stop producing nuclear fuel without dismantling the rest of its program. That would give Kim time to see if his country has received economic benefits in exchange for the production pause and ensure no country plans to invade North Korea.

No one knows how Kim will respond to the plan. But the US can be pretty confident the entire disarmament process — should the North Korean leader even agree to it — will take longer than a year.

5 winners and 2 losers from night 3 of the Democratic convention
The head of US broadcasting is leaning toward pro-Trump propaganda. Biden would fire him.
Democrats didn’t talk enough about racism in their first primary debate
The protests are growing larger, calmer, and more community-oriented
Vox Sentences: Turkey continues its slow slide toward authoritarianism
What would a Sanders or Biden presidency look like?