Lawmakers are testing positive for Covid-19 after the Capitol lockdown 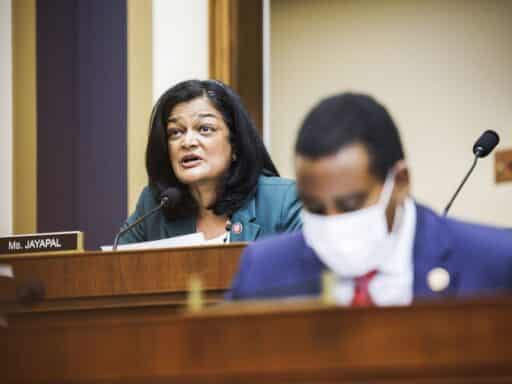 At least five lawmakers have tested positive since the Capitol insurrection.

A growing number of lawmakers have tested positive for the coronavirus since Trump supporters staged an insurrection January 6 at the US Capitol. Currently, at least five lawmakers have said they are infected:

All are self-isolating following their results. LaTurner said he is asymptomatic, while Fleischmann on Sunday said, “I currently feel okay.” Watson Coleman’s office said she is “experiencing mild, cold-like symptoms.” Jayapal did not share whether she is experiencing symptoms in her announcement of her test results. And as of Tuesday, Schneider said, “I have not yet experienced symptoms.”

These positive tests are a reminder of the importance of taking preventative action to guard against the coronavirus, and mask-wearing alone in crowded, indoor spaces with limited airflow isn’t enough to prevent transmission — particularly if others who may be contagious refuse to wear masks. Research has suggested that mask-wearing by all parties in a given encounter could reduce the risk of spread by nearly 80 percent.

LaTurner tested positive the evening of the storming of the Capitol, suggesting he was infected prior to the insurrection; Fleischmann announced his results Sunday. Watson Coleman’s results came Monday, while Jayapal and Schneider received theirs Tuesday. Fleischmann and all three Democrats discovered they’d been infected days after being sequestered with other lawmakers and Hill staffers in a crowded safe room amid the attack.

In video shared by Punchbowl, Blunt Rochester’s efforts can be seen being met with derision from some of her GOP colleagues; refusing her overtures, Mullin can be heard remarking, “I’m not trying to get political here,” before saying to her, “I’ll come over there and hug you.”

After the Capitol had been secured, Blunt Rochester tweeted, “While I was disappointed in my colleagues who refused to wear a mask, I was encouraged by those who did. My goal, in the midst of what I feared was a super spreader event, was to make the room at least a little safer.”

Jayapal expressed similar a similar fear, telling New York Magazine’s Rebecca Traister shortly after the insurrection, “I’m quarantining now because I am convinced that where we ended up, in the secured room — where there were over 100 people and many were Republicans not wearing masks — was a superspreader event.”

And Tuesday, in announcing her test results, the lawmaker said she believed her fears had come to pass: “Hours after Trump incited a deadly assault on our Capitol, many Republicans still refused to take the bare minimum COVID-19 precaution and simply wear a damn mask in a crowded room during a pandemic—creating a superspreader event ON TOP of a domestic terrorist attack.”

Monday, Watson Coleman’s office said the lawmaker similarly “believes she was exposed during protective isolation in the U.S. Capitol building as a result of insurrectionist riots.”

With these newest infections, more than 50 federal lawmakers have now tested positive for Covid-19.

Did the insurrection lead to a superspreader event?

The new cases follow a warning from congressional attending physician Brian Monahan, who advised lawmakers on Sunday to get tested, saying that they “may have been exposed to another occupant with coronavirus infection” while “in protective isolation.”

Whether that “occupant” was LaTurner — or another Capitol Hill employee — is unclear, but the new cases do raise concern that, as Jayapal has claimed, the congressional evacuation may have led to a superspreader event.

As Vox’s Brian Resnick has explained:

Superspreading doesn’t have a specific scientific definition. But, roughly, it’s defined as when one case of a disease causes a disproportionate number of others.

Superspreaders are made at the intersection of timing (a person is most contagious when their viral load peaks, usually right as they are starting to feel symptoms, or perhaps a bit before), an individual’s biology (some people may be predisposed to spread more than others), the activity (the longer the time spent with a superspreader, the greater the chances of being exposed to the virus), and the environment (indoor environments are much more conducive to allowing viral-laden aerosols to linger in a space longer, infecting more people).

From the reporting available about the evacuation, as well as the information Monahan provided, it seems as if lawmakers may be in danger of having been exposed.

First, it is certainly possible that someone unaware of their status as a coronavirus infected person (because, for instance, they did not yet have symptoms) could have been in the safe room; and if they were, likely would have had the right viral load to infect others.

And Monahan has confirmed that there was at least one infected person present, making the the conditions and environment are also of concern. Lawmakers and Hill staff were in a crowded, indoor room in which social distancing was difficult. Those in that room were there for an extended period of time; the Centers for Disease Control and Prevention (CDC) has advised that any close contact with an infected person that exceeds 15 minutes creates a heightened risk of infection.

While it is difficult to assess the individual biologies of all those sequestered, seeming to increase the risk is the fact that many present had recently travelled to Washington, DC from their home states — states that are nearly uniformly overwhelmed by new confirmed cases in what is the worst phase of the pandemic so far.

The easiest — though certainly not foolproof — way to mitigate these risks to wear a mask. As the CDC notes, current evidence suggests wearing a mask “offers some protection to you,” but that masks are effective in limiting the spread of Covid-19 because they “help prevent your respiratory droplets from reaching others.” That is, masks limit an infected person from spreading the coronavirus more than protect the healthy from infection.

As reporting has revealed, masks were not worn by all inside the safe room — and should an infected person have been maskless, they may have infected others, whether these people were wearing mask or not.

In the worst case scenario, many more of those who work on Capitol Hill could positive for Covid-19. Following a White House reception for Supreme Court Justice Amy Coney Barrett — which top US coronavirus official Dr. Anthony Fauci deemed “a superspreader event” — more than 20 people ultimately were infected.

For some present in the safe room, the risk of infection may be limited by the fact that many lawmakers — as well as their staffers — have received at least one dose of a vaccine: As Vox’s Kelsey Piper has explained: “Getting just one dose still reduces a person’s chances of getting Covid-19 by 80 to 90 percent, at least initially.”

But as Angela Rasmussen, a virologist affiliated with Georgetown University, told Vox’s Sigal Samuel recently, “You need to wait at minimum two weeks after the first shot to see any kind of protection, but really you need to wait at least a week after the second shot.”

And many lawmakers are still within that two week, first shot window; Jayapal received her first dose only two days before the insurrection. Watson Coleman had also received one dose of a vaccine.

Overall, as Vox’s Umair Irfan has explained, scientists are still working to understand exactly how much protection vaccination, especially partial vaccination, can provide. But what is immediately clear is that others in the safe room who received their first dose around the same time as Watson Coleman and Jayapal — or who have not been inoculated at all — may then still be at risk of infection.

The definitive American Girl ranking
'Fox & Friends' host Brian Kilmeade on border separations: 'These aren't our kid...
Morocco and Israel plan to normalize ties. Trump changed US policy to make it happen.
This nurse is treating the sickest coronavirus patients. Trump still wants to deport him.
Funeral homes have been changed by the coronavirus. Here’s what it’s like to work in one.
Los Angeles voters just delivered a huge win for the defund the police movement