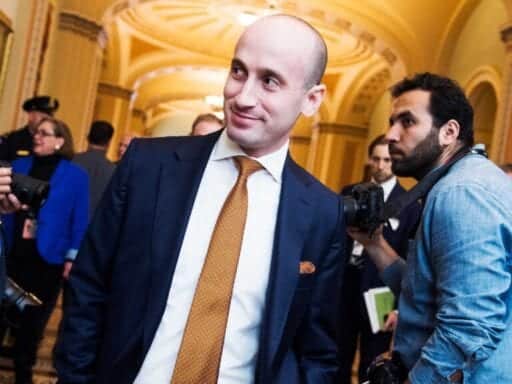 Miller used Breitbart in a campaign to discredit Sen. Marco Rubio, and to advance hardline views on immigration.

White House adviser Stephen Miller has already faced calls to resign following the release of a tranche of emails he sent to a former writer at Breitbart promoting white nationalist content and extremely restrictive immigration policies. Turns out, his relationship with the right-wing site runs even deeper.

According to a new batch of those emails, shared first with the Southern Poverty Law Center and then reported by NBC News, Miller used his relationship with Breitbart staff to also direct coverage to advance his ideological and political stances. He commissioned articles damaging to Republican Sen. Marco Rubio, helped dictate editorial standards about how to describe immigration policies, and published unattributed content under Breitbart’s general staff byline. Part of the time, he did so while working on Donald Trump’s campaign and while Rubio was still in the presidential race.

Miller often referred to Rubio as “pathological” in his correspondence with Katie McHugh, the former Breitbart writer who shared the emails with the SPLC, and asked her to discredit the Florida senator and any immigration policy more moderate than Miller’s hardline stance.

In December 2015, while working for Sen. Jeff Sessions and shortly before he accepted a role in the Trump campaign, Miller asked McHugh to link a report of an undocumented immigrant accused of raping a child to Rubio, writing, “Can you work in a reminder that Rubio’s bill — which he was pushing for Obama — legalized alien sex offenders, ensuring more such rapes would occur? … [Rubio] invents facts to hurt Americans, seems to be the trend.”

Part of Miller’s disdain for Rubio seems to be tied to the senator’s support for immigration reform. Rubio co-sponsored a bipartisan bill in 2013 that would have provided a path to citizenship to some undocumented immigrants. The bill — which ultimately failed in the then-Republican controlled House of Representatives — runs counter to Miller’s hardline views on immigration.

As a White House adviser, Miller has promoted policies — from the Trump administration’s Muslim ban to its more recent attempts to force asylum seekers to pay application fees — that aim to make immigrating, let alone becoming a citizen, more difficult.

Miller has told US Customs and Border Protection officials, “My mantra has persistently been presenting aliens with multiple unsolvable dilemmas to impact their calculus for choosing to make the arduous journey to begin with.”

McHugh, who has renounced the alt-right movement and no longer works for Breitbart, told the SPLC that Breitbart did all it could to promote negative coverage of Rubio: “Rubio was reviled, and reporters and editors brainstormed ways to craft a narrative that would harm his candidacy.”

In a normal news operation, that sort of bias is not smiled upon. But perhaps more distressing is how much Miller worked to guide that negative coverage.

It is not uncommon for lawmakers to write op-eds or to send writers press releases they hope will be turned into articles, but it is uncommon for a congressional aide and campaign adviser to direct the editorial process in a manner damaging to a presidential candidate they do not favor.

This is precisely what Miller did, sending in story ideas, making editorial decisions about story structure, and dictating the organization’s style guide.

This led to some confusion on the part of Breitbart staff as to how to credit Miller’s contributions. In 2015, when he emailed them a chart about the immigrant population’s rate of increase, an editor responded, “How should we run this? Under Senator Sessions’ byline? Or under ‘Breitbart News’ byline?”

Miller told him to run it under a generic Breitbart byline, and also worked to distance himself from other contributions, like when he sent in a list of immigrants accused of rape: “Articles compiled by our staff,” he wrote. “Didn’t get from me.”

Perhaps most striking is that Miller continued this behavior — particularly his anti-Rubio rhetoric — after joining the Trump campaign. Trump, of course, has a number of media outlets that are notedly friendly towards him, from Fox News to OANN.

But before the Republican media establishment fully coalesced around Trump, Miller seemed to use Breitbart as an unofficial arm of the campaign, for instance, telling McHugh to create content around a post from another outlet critical of Rubio a few weeks after joining the Trump campaign. Hours after he did so, Breitbart ran the piece.

As Vox’s Nicole Narea has explained, the first batch of Miller emails the Southern Poverty Law Center analyzed revealed messages that included links to white nationalist articles; that promoted a white supremacist book that casts immigrants of color as savages who subsist on feces; and that praised President Calvin Coolidge’s nativist, hardline immigration policies in the 1920s. This second tranche of emails suggests Miller used Breitbart not just as a perch for his alt-right ideas, but as a platform to attack enemies.

That revelation is likely to increase growing calls for his resignation. Last week, Reps. Alexandria Ocasio-Cortez and Ilhan Omar began calling for Miller to leave the White House. They’ve since been joined by more than 80 other Democratic lawmakers. Ocasio-Cortez has also created a petition demanding Miller’s resignation that reads in part, “A white nationalist is currently serving as a top advisor to the President of the United States. In 2019. … This man cannot serve in the White House” — it has more than 50,000 signatures.

The White House has shown no sign of taking these calls seriously. Instead, they have dismissed them as anti-Semitic (Miller is Jewish).

“Mr. Miller condemns racism and bigotry in all forms,” White House spokesperson Hogan Gidley told NBC. “What deeply concerns me is how so many on the left are allowed to spread vile anti-Semitism and consistently attack proud Jewish members of this administration.”

What we know about the officers involved in George Floyd’s death
Trump’s spent years touting the stock market. At the RNC, he just … didn’t.
Amazon employees shared an event invite to discuss how the company treats its workers. Then it disap...
The best $141 I ever spent: A skateboard
Hunter Biden says taking a job at a Ukrainian energy company was “poor judgment”
Mountain gorillas are distancing, too — from humans