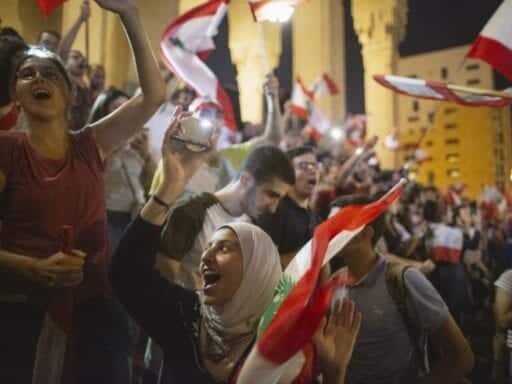 Lebanese Prime Minister Saad Hariri has submitted his resignation, following two weeks of protests demanding he step down. In a televised speech from his residence, Hariri said his decision was prompted by the protesters’ wishes and his sense of what was best for the country.

“I have hit a dead end, I need to create a big shock to move the situation,” Hariri said.

The largely peaceful protests began on October 17, after the government attempted to levy a tax against WhatsApp users to generate funds following wildfires that burned thousands of acres in the country. The fires were met with anger from Lebanese residents because the government was ill-prepared to combat the blazes.

But even prior to the fires, Lebanon was struggling. Water and electricity shortages along with the rapid devaluation of the Lebanese pound generated a sense of popular unrest with the government that then ignited across different sectors of Lebanese society with the proposed tax.

“People put their differences behind (them), religious, political, social, and stand all together against the government because we reached a point where all the people were suffering,” Lana Zeitouny, a 34-year-old Lebanese woman who participated in protests on social media, told me.

Millions of Lebanese residents are taking to the streets, making this the largest anti-government demonstration in 15 years. Chants and banners demand the end of corruption by seeking the removal of all the ruling elite.

In several American cities, protesters also demonstrated in solidarity with the Lebanese protesters. Alessandra El Chanti, a documentary media graduate student at Northwestern University, filmed and interviewed attendees at a rally in Chicago.

“It was heartbreaking, all these stories about how we had to leave our home country because of how corrupt it is,” El Chanti told me. “I felt like it was my duty as a filmmaker to document it all … I felt like it was a piece of Lebanon there with us.”

While Hariri’s resignation is acknowledged to be a victory for the protesters, there are doubts about the impact it will have on their main goals.

“The question now is will this trigger a process by which Hezbollah, which is the critical player in the background, as well as the president and his party … will those people agree to a technocratic government which goes on to the next step of the demands of the protesters?” Rami Khouri, a professor at the American University in Beirut, told Al Jazeera.

The resignation of Hariri, embroiled in a scandal last month for giving millions to a South African model, was a politically expedient sacrifice for President Michel Aoun and his son-in-law, Foreign Minister Gebran Bassil. But just as the reforms package offered earlier in the week didn’t placate the protesters, Hariri’s resignation might not be enough to keep people out of the streets.

The popular protest chant “All means all of them” indicates that many protesters are waiting to see how other politicians like Aoun and Bassil act.

“It’s not going to stop here, it’s going to take to a whole new level,” said Sami Bouzein, a 16-year-old who has been active on and off in protesting efforts since 2016. Bouzein joined the celebrations on the street after Hariri’s resignation and says that this is the revolution he’s dreamed of since he was a little boy.

“People won’t get out of the streets unless we get our freedom, our rights,” Bouzein said.

But the unity found at the peaceful protests might crumble before the resignation of other government officials. Hezbollah leader Hassan Nasrallah publicly denounced the protests as efforts by foreign countries to interfere in Lebanon’s affairs. As rumors of Hariri’s resignation circulated prior to his announcement, black-clad counterprotesters attacked the anti-government camp early Tuesday.

“It’s a revolution, not a protest,” Zeitouny said. As the people in the street call for Lebanon to end corruption and the government is tested, their revolution may have finally begun.

Amazon is selling its futuristic cashierless technology to other stores
Terrazzo used to be kitschy. Now it’s on everything from Spalding basketballs to Madewell dresses.
Welcome to the September issue of Vox’s The Highlight
Arizona Republicans wrestle with McCain’s criticism of Trump — and his iconic vote on health care
One of the few Black C-suite execs in tech is starting a firm to invest in Black, Latinx, and women ...
Trump’s trade war is hurting the global economy