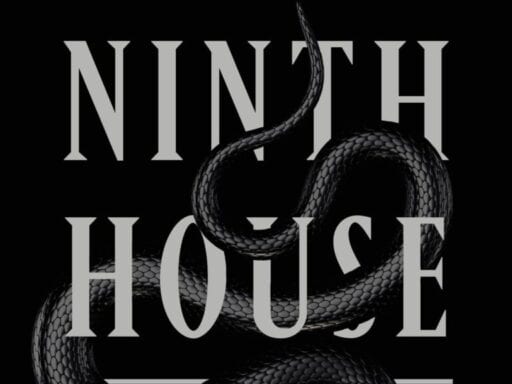 YA superstar Bardugo explores the occult side of Yale’s secret societies in her first adult novel.

Ninth House, the first adult novel by YA superstar Leigh Bardugo, is the kind of book that begs to be read at 2 in the morning, under the covers, with a flashlight in your hand and snacks at your elbow. It’s so immersive that, reading it, I felt myself pulled back into the way I used to read as a child, curled up with a book and disappearing into its pages so thoroughly that it didn’t seem possible that anything else in the world could ever have existed. The only thing going through my mind was Bardugo’s haunted, corrupt, and magical Yale, and Alex Stern, struggling to make her way through it.

Alex is a freshman at Yale, but she isn’t like the rest of her classmates: She doesn’t have the money or the grades or the social clout to fit in at such an elite institution. She’s a 20-year-old high school dropout from SoCal. She was recently the sole survivor of a horrific multiple homicide involving her drug dealer boyfriend. She’s not exactly a natural fit.

But what Alex does have is the ability to see ghosts. And that was enough to get her in the door at Yale.

At Yale, the ghosts are called Grays, and they’re everywhere — especially around the secret societies where the rich and powerful perform dark occult rituals to become even richer and more powerful. And Alex has been recruited to be a new member of Lethe, a watchdog organization that is supposed to keep Yale’s eight Houses of the Veil in line. Her ability to see Grays is so rare and so valuable that in exchange for her services, Lethe is willing to give her a full ride.

But as Alex settles into her new life, she realizes that the eight Houses aren’t just getting their power through magic. They’re getting their power by preying on the less powerful, particularly the townspeople of New Haven. And Alex is expected less to keep the Houses in line than she is to clean up after them.

Bardugo fills the Yale campus with rich, luxurious details: the way the panels of the library “glowed amber, a burnished golden hive, less a library than a temple;” how a glamorous professor flavors her tea with fresh mint that she grows in window boxes in her office. But she also fills it with ghosts, sinister and seedy and terrifying. And the ghosts are a reminder that Yale’s glamour comes from wealth, and that wealth comes from exploiting powerless people. By enrolling in Yale, Alex is making a bargain with the fairies. But the cost might be the loss of her humanity — her ability to recognize that the people Yale’s Houses casually prey on don’t deserve to be victimized.

Alex is the great joy of Ninth House. She’s a con artist with an iron will, a survivor through and through who thinks through the angles of every conversation. Even when she can’t quite fake her way through all her schoolwork, she knows how to play the social game to fool her classmates into thinking she belongs. In one early scene, we watch Alex remind herself to refer to a campus sculpture as a Calder, rather than a sculpture by Calder. “That was the way people here talked about art,” Bardugo writes. “Nothing was by anyone. The sculpture is Calder. The painting is Rothko. The house is Neutra.”

That’s the kind of telling detail that makes Alex so easy to root for — and that makes Bardugo’s haunted, magical Yale feel so immersive and easy to get lost in. Bardugo makes Yale a kind of enchanted forest in this book, following in the footsteps of Pamela Dean’s Tam Lin, in which fairyland was a small liberal arts college. What makes the metaphor work so well in this book is how the very real setting of Yale is transformed into a fantastical place equally inviting and threatening.

Ninth House is willing to go dark, but it never dims so far as to feel like it’s punishing its readers. The darkness is cathartic, because we have Alex there with us, fighting with all her iron will to make it through to the other side. And her will is so strong, so visceral, as though she were exerting it on me, too, daring me to look away from her story. As if I wanted to do anything at all of the kind.

New research shows what AI can teach us about the human brain
Can an online star really make it in Hollywood?
How abortion in Virginia went from a Trump talking point to a winning issue for Democrats
Jared Kushner is trying to sell his Middle East plan at a conference in Bahrain
Photos: Where was Trump — and who was he with — before testing positive for the coronavirus?
Bernie Sanders makes the progressive case for Joe Biden