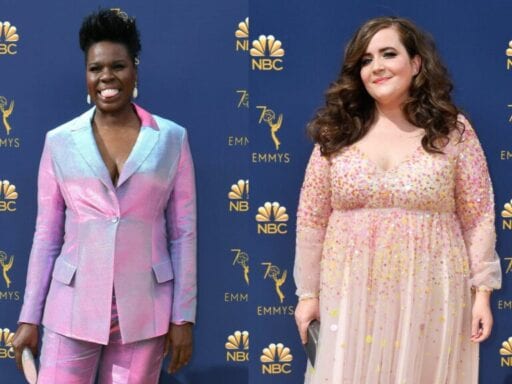 Out of several memorable looks from the 2018 Primetime Emmy Awards, two of the standouts came from Saturday Night Live players Leslie Jones, in a hypnotizing iridescent suit by Christian Siriano, and Aidy Bryant, who wore a whimsical Tanya Taylor dress dotted with 3,500 yellow and pink sequins. The praise on Twitter was immediate and resoundingly enthusiastic.

It’s not at all surprising that Jones and Bryant chose to work with Siriano and Taylor, respectively, on custom Emmys looks. Like fellow actresses Melissa McCarthy and Christina Hendricks, both women have both been vocal about the fact that designers are reluctant or flat-out unwilling to work with celebrities who don’t fit into sample-size clothing — that is, generally, a size 0 to 4. In navigating that reality, Jones and Bryant have formed ongoing relationships with two designers who have extended their sizing in recent years.

The prevailing dynamics of red-carpet dressing strongly favor actresses who fit into sample sizes. When you see a celebrity wearing a designer piece that’s fresh off the runway, one that hasn’t even gone into production yet, it’s often because they’re literally wearing the same piece of clothing that walked down the runway. (Rachel Brosnahan of The Marvelous Mrs. Maisel, for example, wore a days-old Oscar de la Renta dress to pick up her Lead Actress in a Comedy Series Emmy on Monday night.)

For plus-size actresses, and for those among the millions of women between sample size and plus size, red-carpet dressing isn’t as simple as convincing a brand that they’re the next big thing.

In June 2016, Leslie Jones made headlines when she tweeted about her struggle to find a designer who would lend her a dress for the premiere of Ghostbusters, writing, “It’s so funny how there are no designers wanting to help me with a premiere dress for movie. Hmmm that will change and I remember everything.”

It’s so funny how there are no designers wanting to help me with a premiere dress for movie. Hmmm that will change and I remember everything

According to the Hollywood Reporter, Jones wears a size 8 or 10, which puts her below the plus-size range (plus generally starts at a size 14) but still leaves her wildly underserved by designers and stylists alike.

Christian Siriano, the precocious season four winner of Project Runway who established his namesake brand in 2008, tweeted back at Jones with a little waving-hand emoji. The rest is history: Siriano designed an elegant red evening gown for Jones to wear at the movie’s premiere and went on to dress the SNL star in a glittering black dress for the 2017 Emmys. When he made Time’s 100 Most Influential People list in 2018, Jones wrote his bio.

Tanya Taylor and Aidy Bryant, meanwhile, were set up by Glamour magazine in early 2017 — because, the magazine says, it was hoping to start a virtually nonexistent conversation between high-fashion designers and plus-size celebrities. At that point, Glamour reported, no high-end designer had offered to make a dress in Bryant’s size (18) — though she had collaborated with Eloquii on her 2016 Emmys dress — nor had Taylor ever created plus-size clothing.

The result of that collaboration was a navy dress with floral embellishments running across the hem and sleeves, which Bryant wore for an appearance on Late Night With Seth Meyers in January 2017.

Unlike many high-end designers, Christian Siriano has a reputation for inclusiveness. Such was the case when he and Jones started working together.

“The most important thing to know about Siriano, who has styled himself as the designer for every woman since the day he started his company, is that for better or worse, he will be there,” wrote the fashion critic Eric Wilson in a profile of the designer for InStyle earlier this month. “For richer, for poorer, for thinner, for fatter, for older, for younger, for cisgender, for transgender, for famous, for not so famous, for just might be famous someday, he will be there.”

The simple willingness to dress any woman who walks through his door has meant big business for Siriano. In June, he said that extending the sizing of his collection tripled his revenue, and that plus-size clothing accounted for 50 percent of his sales.

Meanwhile, working with Bryant motivated Taylor to offer sizing up to a 22 in future collections, though only for selected pieces. (Judging from her website, that still seems to be the case.) Though Taylor has dressed Michelle Obama, her brand is only six years old and far from a behemoth in the fashion landscape. Extending her sizing opens up her brand to an entirely new customer base.

Trump supporters storm the US Capitol: The latest
3 winners and 4 losers from the Nevada Democratic debate
American Jews are taught a very specific Israel narrative. Can that change?
We’re failing in the opioid crisis. A new study shows a more serious approach would save lives.
Bill and Melinda Gates’s divorce could rock the world of charity
How Ohio has avoided becoming another Covid-19 hot spot (so far)