Letterkenny, streaming on Hulu, is a love letter to small-town life and weird, wonderful slang 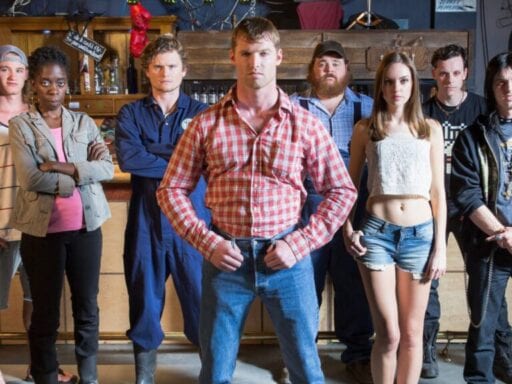 Pitter patter: It’s time to watch this Canadian hangout comedy that combines the eccentricities of Schitt’s Creek with wry and wacky wordplay.

In Watch This, Vox’s culture critics and contributors tell you what they’re watching on TV — and why you should watch it too. Read the archives here. This week: the Canadian comedy Letterkenny. Watch all six seasons on Hulu.

If there’s one trademark image from Letterkenny, it’s of the main character, Wayne (played by series creator Jared Keeso), standing stiffly in the center of the frame, pontificating in a deadpan rural accent on some common life experience. He’s often talking about the kind of everyday encounters and interactions that it’s easy to have with friends, foes, and other people in your community. And he’s always a vision of rural pride: His home-cut Caesar-ish haircut flat and uneven on his head, his eyes squinting toward some unseen middle distance, his fingers hooked in his pant loops, his plaid flannel so uncool it may actually be cool.

This signature scene — which opens many Letterkenny episodes — is a direct descendant from the show’s origins as a YouTube series called Letterkenny Problems. Another remnant comes with the show’s opening title screen, which pauses to set up the premise in two simple sentences: “There are 5,000 people in Letterkenny. These are their problems.” (Sometimes there are variations.)

After “Letterkenny Problems” got picked up by the Canadian streaming TV service Crave, it evolved into Letterkenny, a full-on hangout show that depicts the ongoing hijinks in a small town where various factions regularly face off. There are the Hicks (Wayne, his sister Katy, and his friends Daryl and Squirrely Dan); the Skids (the local whacked-out druggies, often meth-heads, led by Stewart); the Hockey Players (the dumbbell duo of Reilly and Jonesy); and a variety of colorful locals like pastor Glenn and bartender Gail. They all populate the farms, bars, churches, ag halls, and dollar stores of the town, and many of them have a particular fondness for wordplay and slang that makes the show’s layered and often tongue-twisting dialogue an endless delight.

I first heard of Letterkenny years ago, when it came strongly recommended by my teenage nephew who lives in Halifax, Nova Scotia. One of my only experiences with rural Canada amounts to hearing an 8-year-old Canadian kid say that his best friend couldn’t wait to “get old” so he could “work out to get strong and make gains, drink beer, and have sex with girls.” And that simple view of life is definitely apparent on Letterkenny. It seems to drive everything that happens in the town, and watching a bunch of locals mess around in the pursuit of basic happiness — especially when it comes to the pure joy of having a dog — is why I find Letterkenny funny.

If you are wondering whether or not Letterkenny is for you, ask yourself: Do you like the mix of the surreal and totally mundane on the Canadian series Trailer Park Boys; the community of eccentrics on (the also Canadian) Schitt’s Creek; dirtbag hangout shows like It’s Always Sunny in Philadelphia; the anarchic vibe of Irish series Derry Girls; or ’90s-era, pre-edgelord South Park when it was mostly about foul-mouthed kids making trouble in a “shitty little mountain town”? If so, Letterkenny is certainly worth checking out.

After its humble beginnings on Crave, Letterkenny is now billed as a Hulu original, and the streaming network will premiere the show’s six-episode seventh season on Monday, October 14. The show’s world is easy to dip in and out of, and it’s not strictly necessary to watch episodes in chronological order, but the new season does have a through-line where Wayne and his crew start a call-in talk show (about farming, naturally) at the local community TV station.

If the main characters on the show fall into the “hick” category of Letterkenny’s population (as some intros for the show state, “Letterkenny consists of hicks, skids (the druggies), hockey players, and Christians”) the show makes a point to illustrate their smarts with extended silly wordplay. It’s the wordplay that gives the show a lot of its charm, elevating it beyond a Canadian retread of plots that could appear on something like It’s Always Sunny — such as when Wayne, for one, ends up fighting all sorts of out-of-towners in order to keep his title as “the toughest guy in Letterkenny.”

Many a scene features Wayne, his sister Katy (Michelle Mylett), his best friend Daryl (Nathan Dales), and the sage Squirrely Dan (K. Trevor Wilson) hanging out in front of their farm’s fruit stand, with Katy getting some sun and the group riffing on whatever subjects are on their minds. For example, Katy might mention her hatred of the word “moist,” sending Wayne, Daryl, and Dan into a reverie of puns about the greatness of the “Moist-issippi River,” the “United States of A-moist-ica,” “Moist-i Gras,” and musical acts like “Modest Moist,” “Paul Moist-Cartney,” and “Moisty Cyrus” — while Katy coldly declares, “I will fight you.”

Plenty of other moments see Wayne spitting alliterative tongue twisters about fighting and being cold. The “super cold open” from the season three premiere, “Sled Shack,” is a virtuoso example of this talent, as Wayne unspools alliterative tongue-twisters through most of the alphabet, with F inspiring: “It’s fucking freezing, it’s freaking frigid, you’re fit for flu in February without fleece, flannel, full-fledged furnace or fire.” The upcoming seventh season boasts a particularly fun little run where Katy discusses flowers with the group and it’s a series of dizzying flower puns about musicians (Iggy Azalea, Azealia Banks, Brandon Flowers, and so on).

Letterkenny also has its own extensive slang, collected from Canada, hockey, and rural culture. It can make the show feel a bit incomprehensible at first, but it also makes it an interesting puzzle to figure out (or you can cheat with this glossary).

Dan has a habit of adding an S to the ends of words, and it’s reliably funny; when asked whether he’d rather pick stones or pick worms, he tells the Hicks, “Well, picking worms is done at night when it can get rather brisk, so I’d say picking stones because it’s done in the sunshines.” Phrases and words like “pitter patter, let’s get at ’er” (stop wasting time, get to the point, hurry it up) “degens” (short for degenerates), “Texas-sized 10-4” (I get it), “puck bunny” (a woman who’s interested in hockey and hockey players), and “horn” (penis) are all thrown around in rapid-fire chatter.

Those slang examples betray some of the show’s bad habits: Like a lot of dirtbag comedies, Letterkenny can too often over-rely on immature jokes about sexuality, particularly with pastor Glen (who’s played by the show’s director, Jacob Tierney, and I’m not sure what that says).

As the TV landscape is increasingly dominated by the all-you-can-consume platter of warring streaming networks, many of the best comedies in America air in spurts with year-long breaks in between episodes. (Remember Search Party, which last aired in 2017 and is now moving from TBS to a new home on HBO Max in 2020?) Netflix is ending original and entertaining comedies like The Unbreakable Kimmy Schmidt and GLOW after a mere four seasons (or fewer) because their most-streamed shows with the highest ratings are beloved, long-ended network oldies like Friends and The Office.

Enter a rising number of Canadian sitcoms — even ones with American distribution on obscure channels, like this year’s Emmy star Schitt’s Creek — which have started popping up to add to streaming smorgasbord on Netflix, Hulu, and other services because they’re easy to import and have lots of episodes available. It’s becoming more and more possible to stumble upon shows like Workin’ Moms or Kim’s Convenience and wonder, “Where has this been all my life?” Letterkenny has slowly been inspiring that kind of response as it has rolled out its first six seasons and 41 episodes on Hulu (generally a season is six episodes long, with a holiday special as a bonus) over the past year.

It’s easy to see why: There’s a timeless air to Letterkenny’s country setting and mix of wacky and grounded characters that makes it feels relatable. That’s not to say the show can’t be topical; the Hicks, especially, are surprisingly fluent in online discourse, and a season five episode features Jay Baruchel as a “hard right” alt-right idiot protesting a sports team name change from the Chiefs to the Rough Riders.

But what Letterkenny does best is capture the little things that make its rural title town what it is: hockey, fighting, doofy druggies dancing outside the dollar store, and chorin’ on the farm. And then there’s its focus on what really matters — hanging out with your crew and reveling in many of the simple pleasures that make life good: friends, beer, dogs, and armchair philosophy. The result is an entertaining watch, one that may soon have you adding “pitter patter, boys” to your everyday lexicon.

All six seasons of Letterkenny are streaming on Hulu. Season seven debuts October 14.

Joe Biden racks up another big endorsement: Elizabeth Warren
National Guard troops are deploying to help with coronavirus. Here’s what they’re doing.
I had to cancel my health care to run for Congress
How chaos theory helps explain the weirdness of the Covid-19 pandemic
Watch: Ayanna Pressley learns she won her Massachusetts primary for Congress
A week later, President Trump is still defending North Korea agreement