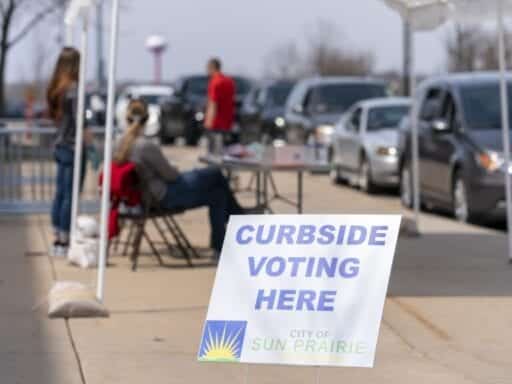 She won despite the voter suppression marring Wisconsin’s recent election.

Liberal challenger Jill Karofsky has won a 10-year term to the Wisconsin Supreme Court, defeating Trump-backed conservative incumbent Dan Kelly, according to our partners at DecisionDesk. As of Monday evening, Karofsky had raked in roughly 53 percent of the vote to Kelly’s 47 percent, when the race was called.

The competition for the state’s Supreme Court seat was among the most closely watched of the races that took place during a tumultuous Wisconsin primary last week. The court will still have a conservative majority, but it’s now narrowed to a 4-3 split.

This race was significant both because of the impact the outcome would have on the margins in the court, and also because there’s a slew of pivotal cases the justices are poised to settle in the coming year, including one on voting rights. Kelly had previously recused himself from a decision on this case — which could result in 200,000 voters getting purged from Wisconsin’s voter rolls — because he was vying for reelection. Karofsky will now have a key vote on its outcome as well as that of any legal action related to the state’s upcoming redistricting process.

“I will not concern myself with what partisan right-wing special interests and politicians would like the outcome of cases to be,” Karofsky has said, regarding her potential position on the court.

Karofsky’s victory follows an incredibly chaotic state primary, and one that many voting rights activists saw as disenfranchising thousands of voters. Rather than postpone the physical primary amid the coronavirus outbreak, the state Supreme Court ruled that it could continue despite the public health risks that voting in person posed to people.

Because voters were forced to choose between voting and their own health, many voters stayed home, while other sought to vote absentee. Thousands of absentee ballots were not received or mailed in time to be counted, however.

Democrats saw the Republican push to continue holding the Wisconsin primary — despite the current circumstances — as an active effort to suppress the number of voters who would participate, since increased turnout would likely benefit Democrats and Karofsky. Despite these efforts, however, Karofsky managed to win any way.

Karofsky heads to the state Supreme Court after serving as a Dane County circuit court judge, as well as a prosecutor for the state of Wisconsin. She’s focused extensively on prosecuting cases related to violence against women, including sexual assault.

Wisconsin’s election was far from normal

Wisconsin’s election last Tuesday in the middle of coronavirus was a surreal experience.

A back-and-forth between Democratic Gov. Tony Evers and Wisconsin’s Republican-controlled state legislature meant that not only did an in-person election proceed as planned despite social distancing and stay-at-home orders, a last-minute request to extend the deadline for absentee ballots was denied by the US Supreme Court the night before the election.

That meant many voters had to make a choice: risk getting sick while exercising their constitutional right to vote in person, or stay home and safe without voting.

In some precincts, Election Day was an event plagued by hours-long waits and a tremendous shortage of both polling workers and stations, prompting civil- and voting-rights activists to call the legitimacy of the election into question before polls even closed.

The epicenter of the long lines and lack of polling stations was Milwaukee, Wisconsin’s largest city — located in a county that’s home to nearly 70 percent of the state’s African American residents. The lack of available poll workers on Election Day meant the number of polling places in Milwaukee shrank from 180 to just five for a city of about 592,000, according to Milwaukee Journal-Sentinel reporter Molly Beck.

“For black people in Milwaukee, the fear is significant,” said Rashad Robinson, a spokesperson for Color of Change, of the calculus voters were making. “The black community in Milwaukee is facing the brunt of the coronavirus pandemic — accounting for over half of coronavirus cases and 81 percent of related deaths.”

Wisconsin’s decision to hold an election in the midst of a pandemic could have profound consequences on American elections, far more than the state’s results. Especially if voters get sick from in-person voting, it raises the question of how states should be preparing for November’s general election, where turnout will likely be much higher. There are a number of efforts to expand vote-by-mail and absentee voting in states that don’t already have them, but those will likely require additional federal money to ramp up in time for the general.

“Wisconsin is a messy dress rehearsal for what will happen in November if we don’t act,” said ACLU voting rights campaign strategist Molly McGrath.

The House just passed a sweeping police reform bill
6 reasons to be skeptical of Trump’s calls to reopen the economy
The dark underbelly of Amazon Prime Video
Lock them up: The danger of political prosecutions in a second Trump term
Voting in person is roughly as safe as going to the grocery store
A nun on the radical possibilities of Christianity