“Liddle’, not Liddle”: Trump’s latest tweets are among his most bizarre yet 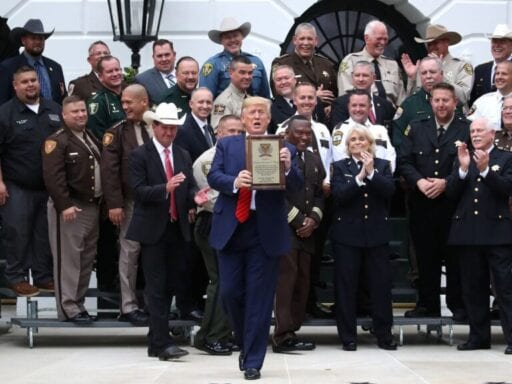 Share
Loading...
Trump participates in a photo op with members of the National Sheriffs’ Association at the White House on Thursday. | Mark Wilson/Getty Images

The Ukraine scandal seems to be making Trump’s tweets even more unhinged.

On Tuesday, President Donald Trump posted a tweet mocking youth climate activist Greta Thunberg. If you thought there’d be nowhere to go but up from there, you were proven wrong on Friday morning.

Trump’s latest batch of morning tweets do not offer much reassurance that the commander in chief is in a healthy state of mind as he deals with a mounting impeachment crisis of his own creation.

As I’ve detailed previously, there have been other periods of time — such as the late stages of the Mueller investigation — when Trump’s tweets became increasingly unhinged as he felt the pressure of negative news cycles.

But his tweets on Friday, coming as they do at the end of a week in which the rapidly widening Ukraine abuse of power scandal made “impeachment” a buzzword in DC, raise questions about how equipped Trump is for what may be coming next.

Just after 7 am in Washington, DC, Trump kicked off his day with a profoundly strange tweet attacking CNN for not making painstaking distinctions between the smears he uses to attack House Intelligence Chair Adam Schiff (D-CA); he also misspelled “describing” and revealed he may not know the difference between an apostrophe and a hyphen.

(While Trump deleted and reposted other tweets he posted Friday morning because of typos, he has not yet deleted this one as of publication time, for some reason.)

Less than 20 minutes later, Trump turned his ire to the New York Times over a story that was published Thursday night with the headline, “In Ukraine Phone Call, Alarmed Aides Saw Trouble.”

The piece, by Peter Baker, reconstructs the timeline of Trump trying to strongarm the Ukrainian government into investigating the Bidens. The piece is based mostly on public sources, but does in a few instances cite unnamed “officials” who provided Baker with accounts about how, for instance, the White House tried to suppress information about Trump’s scandalous July call with Ukrainian President Volodymyr Zelensky from being widely distributed.

Trump alluded to Baker’s spouse, journalist Susan Glasser, calling her and Baker “Trump Hater[s],” and accusing Baker of fabricating sources — something that would cost a journalist their job if true.

Trump then described his aforementioned call with the Ukrainian president as “very legal and very good,” even though a reconstructed transcript of it released by the White House suggests Trump at best solicited a foreign campaign contribution, and at worst may have used military aid to the country as a bribe to spur Ukrainian officials.

…..nice call with with the new President of Ukraine, it could not have been better or more honorable, and the Fake News Media and Democrats, working as a team, have fraudulently made it look bad. It wasn’t bad, it was very legal and very good. A continuing Witch Hunt!

About an hour later, Trump was apparently thinking about Schiff again. Trump capitalized on the fact that a day earlier, Schiff had begun a congressional hearing with Acting Director of National Intelligence Joseph Maguire by reciting an exaggerated account of Trump’s call with Zelensky — a move that I noted at the time was unwise — and accused Schiff of “fraudulently read[ing] to Congress, with millions of people watching, a version of my conversation with the President of Ukraine that doesn’t exist.”

While Schiff is worthy of criticism for not sticking to the actual text of Trump’s call as it was conveyed by the White House, he made clear during the hearing that he wasn’t quoting Trump. Nonetheless, Trump exploited Schiff’s minor error in judgment for all it was worth, and called upon him “to immediately resign from Congress based on this fraud!”

Schiff responded to Trump by indicating that, like many, he’s no longer taking the president’s tweets particularly seriously.

You engaged in a shakedown to get election dirt from a foreign country.

And then you tried to cover it up.

But you’re right about one thing — your words need no mockery. Your own words and deeds mock themselves.

But most importantly here, they endanger our country. pic.twitter.com/Qha74pwW8m

Before 10 am had even arrived in DC, Trump posted another tweet calling for an investigation of Schiff and describing him as “a sick man;” another tweet again defending his call with Zelensky as “a perfect call” (a characterization at odds with what the account of released by his own White House indicated, not to mention officials’ attempts to cover the call up); and a third insinuating that the intelligence community whistleblower who filed a complaint about his dealings with Ukraine might be a “spy” — a particularly dark description given that Trump indicated just the day before that he wishes spies could still be executed.

Sounding more and more like the so-called Whistleblower isn’t a Whistleblower at all. In addition, all second hand information that proved to be so inaccurate that there may not have even been somebody else, a leaker or spy, feeding it to him or her? A partisan operative?

Nearly three years into Trump’s presidency, people have generally figured out that his tweets — with some notable exceptions, such as when he announces new policies like banning transgender people from the military — are generally sound and fury signifying very little.

But they do say something about the mental state of the man in control of the most powerful military in the world (and its nuclear arsenal).

That mental state seems to be addled by conspiracy theories and a pervasive victimhood complex — not to mention a recklessness and lack of shame that has prevented the president, at this late date, from figuring out a way to get his tweets proofread before they’re published.

It’s also worth remembering that what looks bad to most people may not look bad to Trump. After all, before the White House released an account of Trump’s call with Zelensky on Wednesday, Trump repeatedly asserted that the document would exonerate him. Instead, many observers thought the “transcript” released by the White House was far worse than anything they had imagined.

Even so, Trump has continued to describe the call as “perfect.” And Friday morning illustrated how that same lapse in judgment shines through in his tweets.

Sharp Objects’ shocking credits scenes — and what they reveal about the killer — explained
Bill Gates says we can’t restart the economy soon and simply “ignore that pile of bodies over in the...
Mission creep a way of life in Western Pacific as sailors struggle with constant demands
A reading list to understand police brutality in America
Kurt Volker, impeachment witness requested by Republicans, debunks many of their arguments
New unemployment filings are so high only the Great Depression compares