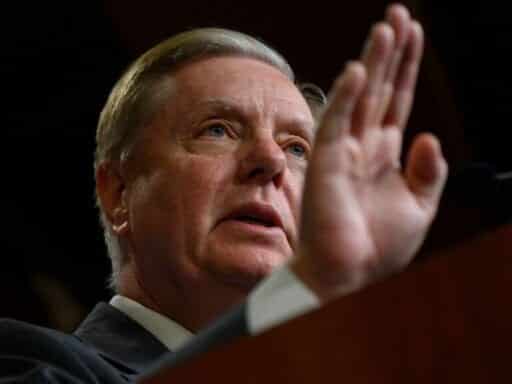 Share
Loading...
US Senator Lindsey Graham (R-SC) speaks during a press conference on the impeachment of President Donald Trump at the US Capitol in Washington, DC, on October 24, 2019.  | Andrew Caballero-Reynolds/AFP via Getty Images

Senate Republicans are joining the pile-on over the House’s impeachment process.

Not to be outdone by their House counterparts, Senate Republicans are piling onto attacks about the process behind Democrats’ impeachment inquiry, the latest GOP attempt to derail the focus on the substance of the probe itself.

Trump ally and Senate Judiciary Chair Lindsey Graham, who’s at the forefront of this push in the upper chamber, introduced a resolution on Thursday that condemns the House inquiry and its interviews with impeachment witnesses behind closed doors. The resolution, which has 41 Republican cosponsors, also urges the House to hold a formal vote to initiate an impeachment inquiry, a move that could give lawmakers in the minority more power to subpoena witnesses.

“If you believe you have a case against the president, vote to open up an inquiry,” Graham said in a press conference announcing the resolution, which is also cosponsored by Senate Majority Leader Mitch McConnell.

It’s a line Republicans in both the House and Senate — not to mention President Donald Trump — have used many times since Democrats opened an impeachment inquiry into Trump’s alleged attempts to co-opt US foreign policy for personal political gain. Republicans are making the case that House Democrats’ use of closed-door depositions as part of the inquiry is limiting the transparency around the probe and preventing GOP members from fully participating in it.

More than 40 House Republicans who sit on all three of the committees overseeing the inquiry — the Intelligence, Foreign Affairs, and Oversight panels — have been able to ask questions and review the testimony of all the witnesses who’ve been deposed.

“They know as well as I do that there will be public hearings in the future once evidence is gathered,” Senate Minority Leader Chuck Schumer said in a floor speech on Thursday. “So this is not about process. That is a diversion.”

Republicans, however, are still trying to make the argument that the inquiry process is flawed — a move made particularly evident by House Republicans’ attempt to storm a secure area where witness interviews have been conducted this past week. They’re pushing this narrative even as they shy away from engaging in the substance of allegations against Trump, a sign that it’s become their main — and potentially only — line of defense.

Graham’s new resolution comes in the wake of pressure from both Trump and his allies for Republican lawmakers to step up their protests about the impeachment inquiry. “Republicans need to get tougher and fight,” Trump said during a Cabinet meeting on Monday.

Until this point, while Senate Republicans have cast doubt about the nature of an alleged quid pro quo between Trump and Ukrainian President Volodymyr Zelensky, many lawmakers have largely sought to sidestep impeachment-related questions. Now, it seems, Republicans have finally found their own comeback of sorts, even if it doesn’t really address the focal point of the inquiry.

Sen. Mitt Romney (R-UT), a vocal Trump critic and one of the most outspoken Republicans on the subject of impeachment, has even signaled openness to it. “I would like to see a more open process than what’s been seen so far,” he told the Los Angeles Times’ Jennifer Haberkorn.

Graham’s Thursday push follows a sharp reversal he’d made on comments regarding House Republicans’ Wednesday actions. Initially, he had described Republican efforts to rush the SCIF as “nuts,” though he later backtracked and said he supported the “protest.”

I was initially told House GOP took the SCIF by force – basically like a GOP version of Occupy Wall Street.

Apparently it was a peaceful protest. Big difference.

I understand their frustration and they have good reason to be upset. https://t.co/39GLwGgrPq

Senate Republicans’ emphasis on process comes as the White House itself struggles to put together a coherent messaging strategy about impeachment. “They’re working on getting a messaging team together,” Graham told reporters on Thursday. “[President Trump] would like the process to be exposed for being basically unfair.”

Democrats are calling out the process arguments as hollow

There’s one big factor making it a whole lot tougher for Republicans to argue over process: the Trump White House.

In the course of House Democrats’ impeachment inquiry, actions by the White House appear to contradict claims of wanting more transparency. Vice President Mike Pence has rejected requests from the House to disclose Ukraine-related files, as has outgoing Secretary of Energy Rick Perry, for example.

“If the White House and its congressional allies truly wanted an open and transparent process, the White House would provide the documents Congress requested, it wouldn’t defy subpoenas, it wouldn’t forbid executive branch employees from testifying,” Schumer said on the floor.

Additionally, there’s been past precedent about conducting portions of an investigation behind closed doors and making the information public later. It’s an approach that was taken in connection with Bill Clinton’s impeachment inquiry, in which a private grand jury transcript was ultimately shared.

As Graham noted, however, the lack of a formal vote on impeachment does have some potential effects on Republicans’ ability to subpoena witnesses. The House approval of an impeachment inquiry resolution in the cases of both Bill Clinton and Richard Nixon included language that granted the party in the minority more subpoena authority, though these subpoena requests could still be overturned by the majority, reports the Los Angeles Times’ Sarah Wire,

House Speaker Nancy Pelosi has refrained from holding a floor vote on the impeachment inquiry largely due to pushback from within the caucus, including concerns from moderate members who are worried about taking a vote that’s on the record, Politico reports.

“There’s no requirement that we have a vote, and at this time, we will not have a vote,” Pelosi has reportedly said.

By and large, however, Graham’s comments highlighted how little ground Republican lawmakers seem to have when it comes to backing up the president around the substance of the allegations he faces.

A rare bipartisan agreement on immigration reform has tanked in the Senate
How has the coronavirus pandemic impacted your life? Share to help Vox’s reporting.
Scott Pruitt’s faith guided his time in office and shielded him
India takes a small step toward relaxing its strict lockdown
The Ford-Kavanaugh sexual assault hearings, explained
Joe Biden is not Barack Obama