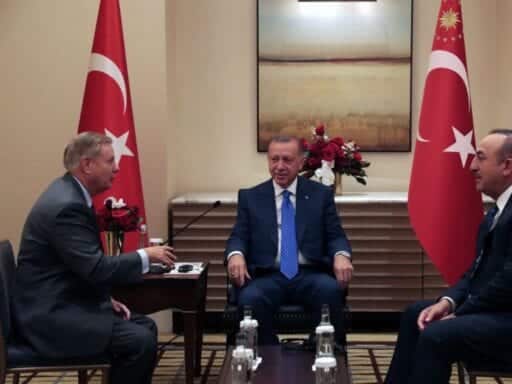 Trump seems on board with the plan.

A bipartisan Senate effort is in the works to punish Turkey for its attacks on Kurds just days after President Donald Trump withdrew US troops from northern Syria earlier this week.

Led by staunch Trump ally Sen. Lindsey Graham (R-SC) and Sen. Chris Van Hollen (D-MD), the goal is to impose a financial penalty on Turkey’s highest political leaders — including President Recep Tayyip Erdoğan — and military for invading Syria’s north. Reports show that Turkey has already killed around 16 Syrian Kurds, America’s top partner in the fight against ISIS, including at least one child.

The bill introduced on Wednesday, then, aims to compel Turkey to end its airstrikes and ground invasion. Graham’s spokesperson Kevin Bishop told me he’s unsure if there will be other similar efforts pushed in the Senate, but he “expect[s] our bill will have bipartisan, bicameral support.” A Senate Democratic aide, however, told me this was the main effort in that chamber.

Bishop also noted the legislation wasn’t written in conjunction with the White House, but it seems to have the president’s support anyway.

“I do agree on sanctions, but I actually think much tougher than sanctions if he doesn’t do it in as humane a way as possible,” the president told reporters on Wednesday when asked about Graham’s sanctions legislation. Trump doubled down on that position Thursday, tweeting “I say hit Turkey very hard financially & with sanctions if they don’t play by the rules! I am watching closely.”

It’s a confusing stance to take given that Trump’s decision to withdraw 50 US troops from northern Syria effectively paved the way for Turkey’s incursion.

I am pleased to have reached a bipartisan agreement with Senator @ChrisVanHollen on severe sanctions against Turkey for their invasion of Syria.

While the Administration refuses to act against Turkey, I expect strong bipartisan support. pic.twitter.com/Ph5fIVt7k3

In that disjointed policy, sanctioning Turkey is about the only thing the president and Congress can agree on.

Congress has passionately pushed back on his decision to move troops, arguing it’s a betrayal of one of America’s best partners in the region and endangers the broader fight against ISIS and other extremists. The president defends the move, saying he was trying to stop America’s involvement in “endless wars” — though no service members have yet come home — while adding that he would “totally destroy and obliterate the Economy of Turkey” should it harm Kurds.

The harm has happened and Turkey’s brutal campaign continues. The question now is if Congress or Trump can act quickly enough to stop it.

What the Graham-Van Hollen bill would do to Turkey

The two-page proposal, which you can find below or here, is broken up into eight sections of punishments but it really targets three main entities.

First, it goes after Turkey’s top political leaders, from the president to the minister of energy and natural resources. Basically, if you’re a key member of Erdoğan’s staff, you’re getting sanctioned.

Second, a lot of the penalties target Turkey’s military, which is a bold move considering the country is a NATO ally. Countries that sell weapons to Turkey or offer any assistance will face US sanctions, per the bill, and that could make it harder for Ankara to rearm.

Third, Turkey’s energy sector would take a hit. According to the bill outline, it would target “any foreign person or entity who supplies goods, services, technology, information, or other support that maintains or supports Turkey’s domestic petroleum production and natural gas production for the used by its armed forces.”

There’s also a section about restricting travel for Turkish leaders to the US and filing reports, as well as a part on how humanitarian aid, medical assistance, election help, and intelligence sharing would be exempted. Still, if passed and signed by the president, the legislation would be a major hit on a NATO ally.

The sanctions could come off Turkey if the US certifies that it’s not unilaterally operating in Syria, meaning it either left the area or worked in tandem with the US. The administration has to make a determination on that every 90 days and report to Congress.

Even though many say Turkey deserves a reprimand for its actions, there’s no question that the passage of this measure would sink US-Turkey relations to an even lower place than where they are now.

Get ready for Halloween as the Vox Book Club reads Mexican Gothic
The race for presidential delegates has officially begun. Track them here.
Dems are unified on immigration now. Will they still be when Trump is gone?
Poll: The majority of Americans now support impeachment
These are the charities where your money will do the most good
Nike, Colin Kaepernick, and the history of “commodity activism”