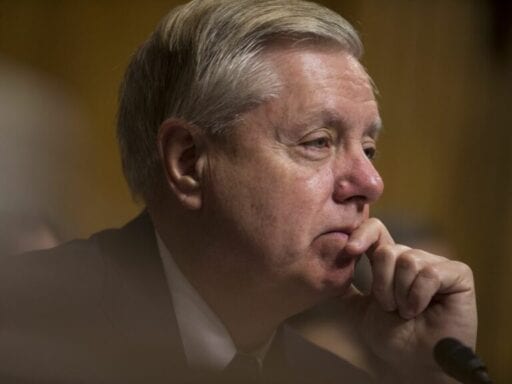 Graham also told acting Defense Secretary Patrick Shanahan that he would be the Trump administration’s “enemy” on Syria.

Sen. Lindsey Graham (R-SC) has made no secret of his disdain for President Donald Trump’s decision to remove US troops from Syria.

In December, for example, the senator called Trump’s announcement that he would abruptly bring all 2,000 service members home from the country “a stain on the honor of the United States” and a “huge Obama-like mistake.” US troops are in Syria primarily to fight ISIS, and Graham and others have criticized the move because in part because America would abandon one of its key allies, the Syrian Democratic Forces, who have fought the terrorist group on the ground for years.

Graham reserved his most vitriolic response, however, for a February 16 closed-door meeting in Munich with acting Defense Secretary Patrick Shanahan.

“Are you telling our allies that we are going to go to zero by April 30?” he asked Shanahan, according to Graham.

“Yes, that’s been our direction [from the president],” Shanahan replied.

Later, he added, “If the policy is going to be that we are leaving by April 30, I am now your adversary, not your friend.”

That’s a sitting senator — and major Trump ally — berating the president’s defense chief with expletives and vowing to be an “enemy” of the administration’s plans. What’s more, Graham made those comments alongside other lawmakers from both parties in the room who, according to reports, were on his side.

Shanahan heard “a chorus of voices that basically said, ‘This is not going to work, there is a bipartisan resolve not to let this happen, and you need to send a message back to the president that there’s a combined, unified view this is not the way to go and he should change course,’” Sen. Robert Menendez (D-NJ), the top Democrat on the Senate Foreign Relations Committee, told Rogin after the private meeting.

One lawmaker described the sentiment toward Shanahan quite simply to NBC: “He lost my confidence.”

Graham has good reason to be upset

Trump has said ISIS in Syria is defeated, but that’s not really true.

We have defeated ISIS in Syria, my only reason for being there during the Trump Presidency.

The terrorist group has lost the vast majority of its territory in Syria (and Iraq) under Trump, mainly because of the US military’s thousands of airstrikes and the ground fighting by US allies on the ground. However, the Pentagon still says that ISIS has as many as 17,100 fighters in Syria, and about 30,000 total between Syria and Iraq. That’s about how many militants the group had at its peak strength in 2014.

This means that while ISIS is certainly far weaker as an organization than it was at its height, it’s still a long way from being truly “defeated.”

So for Trump to order US troops out — and for Shanahan, who is angling for the permanent Pentagon chief position, to seemingly let it happen without any pushback — is certainly going to make Graham and other lawmakers mad.

But the dumbest effing idea ever? Well, that’s up to you.