Little Mix is the best girl group in the world. And it’s time America gave them a listen. 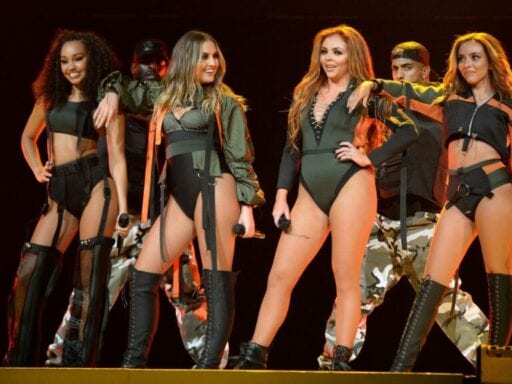 If there’s justice in this world, Little Mix would have a No. 1 hit in the US

One of the biggest travesties in the history of pop music is the United States’ blissful ignorance of the greatest pop girl group of the last decade: Little Mix. The multi-platinum, award-winning group has had success worldwide and is one of the biggest acts in the UK. But despite a megaton of talent and addictive bops, Little Mix has yet to achieve a bona fide mainstream hit in the United States.

That could change, I’m hoping, with March 27’s release of “Break Up Song.”

While the global Covid-19 pandemic has halted numerous album releases, Little Mix has used this anxious moment to drop what’s arguably the best song of its career. “Break Up Song” has the same ’80s-inspired, synth-heavy, up-tempo dance-pop qualities that make other recent hits, like Dua Lipa’s Future Nostalgia and the Weeknd’s “Blinding Lights,” so excellent.

It’s a giddy and sparkly survival anthem, a song that magically evokes a memory of leg warmers and ill-fitting leather jackets, even though none of these young women was alive in the ’80s. But there’s still a twinge of wistfulness at its heart, emanating from the premise of dancing the pain away.

“I don’t wanna turn back time, ’cause what’s another lonely night?” the last verse goes. “I know under these lights, I’m good without you. For all those tears that I cried, I’ll sing it louder tonight — let it play on and on and on.”

There’s a biting bit of irony in the timing of this magnetic song’s release. There’s a plethora of great dance-pop coming out right now, and we’re all stuck in our homes — unable to dance at the clubs with our friends, confined instead to our lonely living rooms. That stinks, and there’s not much we can do about it right now as we keep our social distance.

But “Break Up Song” and its danceability are undeniable. And it’s just one body-moving hit from Little Mix’s nine-year war chest of pop music perfection. There’s no better time to get acquainted with the best pop girl group in the game today than right now, when we could use the motivation to get up off the couch and smile.

Little Mix’s story is about talent and growth parts

Little Mix, like a superhero team, is greater than the sum of its parts. But individually, those parts are pretty good, too. Little Mix consists of Perrie Edwards, Jesy Nelson, Leigh Anne Pinnock, and Jade Thirwall, each woman in her late 20s. They’re all fantastic singers, and since winning X-Factor UK’s eighth season in 2011, they’ve sold over 50 million records worldwide, gone multi-platinum in the UK, and released five albums.

But in the United States, they’ve barely made a ripple on the Billboard charts.

European artists’ struggle to cross over isn’t uncommon in the US. For whatever reason, Europop stars like Kylie Minogue or Girls Aloud, or even current worldwide “It Girl” Dua Lipa, have had trouble finding the same kind of success on American soil as they enjoy overseas. Instead, they thrive as cult favorites stateside, praised by fans who have taken the time to get invested.

It’s strange, because dance-ready pop music is often successful in the States. The easiest touchstone that the general American public may have to Little Mix is the group Fifth Harmony. Each group is comprised of girls that came together because of reality shows and went on to achieve pop record-selling success. Little Mix won its season of the British talent competition show X-Factor in 2011, a year before Fifth Harmony was assembled on the American version of the same show. But the biggest difference between the two groups is that, unlike Fifth Harmony, Little Mix is still together and going strong.

Little Mix has always had a sound of its own thanks to the group’s especially strong voices, fantastic harmonies, and a vibe that’s bright, catchy, and a revolutionized nod to ’90s pop. This has been apparent even early in their career, like in the 2012 single “Wings.” And “Black Magic,” their 2015 hit, is the epitome of purely great bubblegum pop:

But just because the foursome can churn out a candy-coated smash doesn’t mean they’re not each talented vocalists. Edwards, Nelson, Pinnock, and Thirwall each has a tremendous voice with its own specific qualities. All fans have their favorites among the girls; it’s Perrie Edwards’s voice and its combination of power and husk that often leaves me gobsmacked.

A stripped-down version of a song is the best way to really hear how talented Edwards is — and the others are, too — as heard in the cover below.

It’s when the stunning vocals and the catchy pop melodies come together that Little Mix truly shines. The group’s platinum-selling hit “Shout Out to My Ex” is a perfect example. The 2016 song garnered the group a major Brit Award win in their home country and is infamously about Edwards (who co-wrote the song with her bandmates) and her romance with former One Direction-er Zayn Malik.

Malik and Edwards dated for four years and were engaged until they dramatically broke things off. Malik started dating supermodel Gigi Hadid three months later. That’s all documented in the song, but at the same time, it’s also about all of our stupid exes, and it’s a perfect empowerment pop anthem.

Edwards’s vocals rev up the high-paced kiss-off tune, but it’s the quirkier, softer moments that win me over.

“Guess I should say thank you for the hate yous and the tattoos. Oh baby, I’m cool by the way,” Thirwall sings, shifting the song from anger to some self-reflection and admission. “Ain’t sure I loved you anyway. Go ’head, babe, I’mma live my life, my life,” she chirps.

“Shout Out to My Ex” channels the same kind of break-up energy as Kelly Clarkson’s “Since You Been Gone” or, more recently, Ariana Grande’s “Thank You, Next.” But Little Mix takes that energy straight to the dance floor, or on a coastline joyride in a convertible.

Comparing older songs to newer ones makes it clear just how much more confident these women have become over the years. It’s one of the nifty things about watching these women grow up — as is seeing them stay true to their empowerment messages, especially targeted for girls, young women, and LGBTQ people.

Like any successful pop group, the members of Little Mix have been the subject of tabloid gossip, including slut-shaming and body-shaming. Nelson, the smoky-voiced singer of the band, opened up about depression and eating disorders in a 2019 BBC documentary about her struggles in Odd One Out. The group’s love lives, friendship, and shift into a more mature image have all been endlessly scrutinized.

Now that they’ve been in the industry for almost a decade, they’re ready to tackle the media head-on in songs like “Shout Out to My Ex.” They’ve even turned the tables on their haters and used the constant chatter about them in more recent songs like “Woman Like Me” and “Wasabi.”

“Love to hate me, crazy, shady, spit me out like hot wasabi,” Thirwall sings in the opening verse of “Wasabi.” This song, released in 2018, departs from the group’s usually flawless harmonies to go somewhere darker and more sardonic — it’s about all the speculation and scrutiny the women are subject to, which makes this tonal change fitting.

“Lick me up, I’m sweet and salty. Mix it up and down my body. Love to hate me, praise me, shame me — either way you talk about me,” Thirwall purrs.

“Wasabi” hints at where the group was heading: A significant moment in its recent history is that Little Mix has moved on to a new record company, RCA, after splitting with Simon Cowell’s SyCo in late 2018. The song is the last for their previous company.

The group has effectively left its reality TV beginnings behind. Little Mix is now seemingly in more control of its songs and the direction it wants to go, which may be best reflected now in “Break Up Song.”

“For all of the times they screwed us over, let it play on and on and on,” the women sing in the chorus of “Break Up Song,” a lyric that could easily be about all the ex-boyfriends — or all the opportunities they didn’t get with their previous record company.

Little Mix’s signature vocals and harmonies are still there, but “Break Up Song,” like their last album with SyCo, 2018’s LM5, feels fresher and more like the music Little Mix wants to be putting out. At the same time, as evidenced in “Break Up Song,” Edwards, Nelson, Pinnock, Thirwall, have never been afraid to indulge in the joys and highs of dance-pop. They’ve also brought their top game to the dance party without fear.

Part of the joy of being a Little Mix fan has been watching these talented women grow up gracefully and unapologetically and seeing that growth reflected in their music. And it isn’t too late for Americans to start listening — in fact, this turning point in the girls’ career may be the best time to jump in.

The closure of meatpacking plants will lead to the overcrowding of animals. The implications are hor...
The “experts” don’t know everything. They can’t.
Swing-state Pennsylvanians are divided on fracking. Here’s why.
China may double its nuclear arsenal in just 10 years. Don’t panic.
This week in TikTok: The real story of the Trump rally is not that interesting
Democrats have a plan to automatically expand health coverage in a pandemic