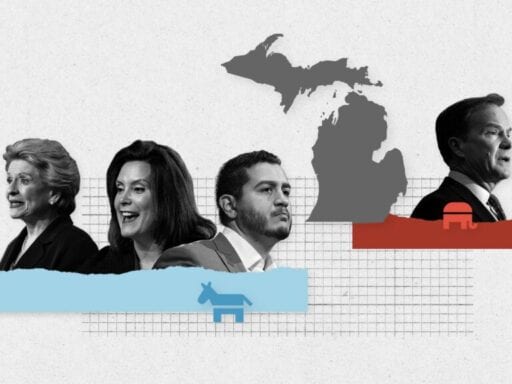 Democratic and Republican primaries for key governor, Senate and House elections are being held on Tuesday.

In the 2018 midterm elections in Michigan, Democrats are in good shape to keep a Senate seat and retake the governor’s mansion — and the Wolverine State also gives them a couple of chances to pick up House wins.

Two Michigan House elections are outright toss-ups, and a couple of others could be in play if Democrats build a big enough blue wave. Democratic Sen. Debbie Stabenow looks to be in good shape to hold the Senate seat on the ballot in 2018.

Democrats could also retake the governor’s mansion, and the political environment is favorable enough here for them that election forecasters think they could take the state House, despite a sizable deficit in seats. The gubernatorial fight has shaped up to feature an interesting tussle among progressive and establishment Democrats.

Polls close at 8 pm ET in Michigan. Live results, powered by Decision Desk, are below.

Michigan governor’s primary elections: a tight race on both sides for an open governor’s seat

On the Democratic side, former State Senate Democratic leader Gretchen Whitmer has narrowly led in the polling. She looks like the slight favorite, while prominent progressives like Alexandria Oscaio-Cortez are trying push Abdul El-Sayed to an upset victory.

Both parties still need to get through their August primaries, but NBC/Marist polled a hypothetical general election matchup with the leading candidates. They found Whitmer leading Schuette 47 percent to 38 percent. Cook Political Report thinks the governor’s race is a toss-up. //link to sources on this//

Michigan Senate primary elections: Stabenow is expected to sail through

Business executive and veteran John James and business executive/Yale and Harvard economist Sandy Pensler are considered the Republican frontrunners. Polls have shown James, one of the few black Republicans in big races this year, with a slight but persistent lead.

Stabenow should be fine; polls put her up by a lot over her potential challengers. Cook puts this in the Likely Democratic camp.

Four Democrats are on the ballot. Matt Longjohn, a former YMCA and public health official, has raised a lot of money and might have the most compelling story, having jumped into the race after Upton’s vote for the repeal legislation. David Benac is a Western Michigan history professor trying to run as a grassroots candidate. Rich Eichholz is a scientist arguing for evidenced-based policy. George Franklin, a former Kellogg lobbyist also raising a lot of money, rounds out the field.

The 6th, like the 1st, is more of a long-shot for Democrats. Cook has it as Likely Republican and rates the district as R+4. Upton is an entrenched incumbent.

But Trump’s margin of victory was narrower here — 8 points — and the district has elected the more moderate Upton for decades. It seems at least conceivable that an anti-Trump wave could sweep him out of office, if Democrats successfully tie him to the president. But it probably would take a significant wave.

Michigan Seventh Congressional District: a seasoned Democrat and a “Berniecrat” seek to topple a Republican incumbent

Gretchen Driskell was put on the Democratic Congressional Campaign Committee’s Red to Blue list, meaning Washington Democrats like what they’ve seen from her campaign. She comes from a Navy family and has served as a mayor and now in the state legislature. She has run here before, having lost to Rep. Tim Walberg in 2016 by 15 points.

Her only competition on the ballot is Steven Friday, running as a self-identified “Berniecrat.”

This is another Likely Republican district; according to Cook it’s R+7. Trump won by 17 points, and the district is very white and not particularly well-educated.

But the 7th District has swung in prior wave elections (see 2008 and 2010), and Driskell profiles as the kind of candidate Democrats think can compete in areas like the 7th. Her 2016 loss to Walberg was actually a little narrower than Clinton’s, too, if you’re looking for a reason to be optimistic.

Elissa Slotkin is another name on the DCCC’s Red to Blue list. She is a former CIA officer who worked on the White House National Security Council under both President George W. Bush and President Barack Obama. She definitely has the look that Democrats like for these swing districts: a history of military and public service. Women are also cleaning up in Democratic primaries, as Vox has documented.

Her only competition is Chris Smith, a Michigan State University public policy professor, running on good government and Medicare-for-all.

The 8th is a toss-up, according to Cook, and the district is just R+4. Clinton lost to Trump by less than 7 points here in 2016. It covers an area near Lansing, the state capital, and its constituents are a little better educated — all ingredients that could give Democrats an edge.

Michigan 11th Congressional District: a competitive primary for both sides of the aisle

Rep. David Trott is retiring, so it’s an open seat. The GOP primary is very competitive, with a lot of credible candidates. Among them are former US Rep. Kerry Bentivolio and several state lawmakers: Sen. Mike Kowall, Rep. Klint Kesto and former Rep. Rocky Raczkowski. Self-funding business executive Lena Epstein rounds out the field for Republicans.

It’s also a wide open field for the Democrats. Suneel Gupta, brother of doctor and CNN personality Sanjay Gupta, has the most money. Former Obama auto rescue official Haley Stevens has some union support and Hillary Clinton’s endorsement. Fayrouz Saad is angling to be the first Muslim woman elected to Congress and she got the Alexandria Ocasio-Cortez endorsement. Current Michigan Rep. Tim Greimel is also on the ballot.

The 11th looks like a toss-up. Trump beat Clinton by just four points here, and the district profiles as R+4. It’s pretty diverse and very well-educated.

Having no incumbent could be an advantage for Democrats, but it’s hard to know exactly how the race will look until we see who wins the primaries on Tuesday. But the 11th should be a focus for both parties in the battle for the House.

Michigan 13th Congressional District, special election: Conyers’s great-nephew is among those vying for his old seat

Rep. John Conyers had to retire after sexual harassment allegations. His successor will be picked in this Democratic primary, barring something unforeseen.

HIs great-nephew, State Sen. Ian Conyers, is running. So is Detroit City Council President Brenda Jones. She is the subject of a strong campaign to elect an African-American woman for this city district.

Westland Mayor Bill Wild and lefty former state Rep. Rashida Tlaib are the rest of the field, with Talib raising a lot of money and both running progressive platforms. Because of a Michigan election law quirk, there will be in November both a special election to fill the last few months of Conyers’s term and then a regular election for the term starting in 2019.

Whoever wins the primary will be the next representative for this 57 percent black district.

Trump’s last stand on immigration
How some Black Americans are finding solace in African spirituality
Republican Ron DeSantis says electing black opponent Andrew Gillum would “monkey this up”
How Trump used charitable funds and a fake bidder to buy a portrait of himself
No one can opt out of this pandemic. And that will change us forever.
The number of migrants arrested at the border dropped again in December