Live results for the August 4 primaries 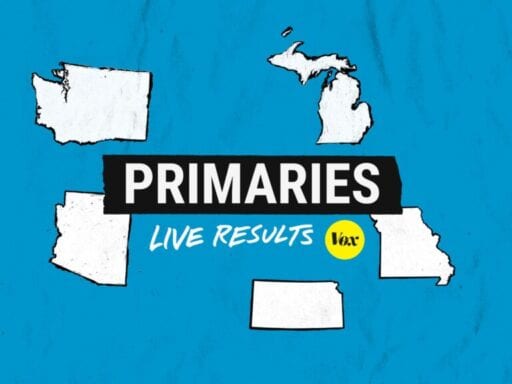 Voters in Kansas, Arizona, Michigan, Missouri, and Washington are heading to the polls.

Things have been (mostly) quiet on the primary front for the past few weeks, but the August 4 primaries promise to be an exciting bunch.

Five states are holding their primaries: Kansas, Arizona, Michigan, Missouri, and Washington state. While Arizona and Michigan will be the most important of these states come the November 3 battle for the Electoral College, Kansas’s US Senate primary makes it the most hotly anticipated Tuesday race.

Kansas is certainly not a swing state; the electorate hews moderate to deeply conservative. But Democrats are watching to see if they can take advantage of a highly competitive Republican Senate primary. The race for that open seat is pitting ultraconservative and controversial former Kansas Secretary of State Kris Kobach against still-conservative, if less controversial, Rep. Roger Marshall. Kobach lost the 2018 Kansas gubernatorial race to Democrat Laura Kelly, and national Republicans fear a similar scenario could play out if Kobach wins the party’s Senate nomination. State Sen. Barbara Bollier, the Democratic candidate, is expected to win her primary. Kansas also has a number of House primaries.

In the Arizona Senate race, endangered incumbent Sen. Martha McSally faces a challenge from businessman Daniel McCarthy. While McSally is expected to beat McCarthy and go on to face unopposed Democrat Mark Kelly in the general, some political observers are watching to see if there’s dampened enthusiasm for McSally from Arizona’s conservative Republican base.

Less exciting is Michigan’s US Senate primary, where both Democratic incumbent Sen. Gary Peters and his Republican challenger John James are running unopposed on Tuesday. Instead, the most interesting Michigan primary to watch will be progressive Rep. Rashida Tlaib’s reelection race in her safely Democratic district; Tlaib is being challenged by Detroit City Council president Brenda Jones.

Missouri’s primaries feature a rematch in the state’s First Congressional District between incumbent Rep. William Lacy Clay and challenger Cori Bush, a nurse who campaigned in 2018 as a progressive champion and has argued the district needs more responsive leadership. Additionally, Missouri voters will decide whether to make their state the 38th to expand Medicaid under Obamacare.

Finally, Washington state features a handful of competitive House primaries, most notably the Third, Eighth, and 10th Congressional Districts. The 10th District, left open with longtime Rep. Denny Heck (D) stepping down to run for lieutenant governor, has a field of around 20 candidates vying to replace him.

Vox is covering the results live, with our partners at Decision Desk HQ.

Tuesday’s highest-profile race in Arizona is for the US Senate. On the Democratic side, former astronaut Mark Kelly has no challenger, and will go on to face whoever wins the Republican primary in November.

On the Republican side, incumbent Sen. Martha McSally faces a challenge from businessman Daniel McCarthy. While McSally is expected to beat McCarthy, some political observers are watching for any unexpected problems.

“If there are any issues between McSally and the base, it will be revealed in the primary,” Paul Bentz, a political consultant in Arizona, told Vox. “If McSally’s victory is smaller than expected, it would spell trouble for her in the general, as she would run the risk of some of the Republicans choosing to stay home — or vote for president but skip her race.”

That would be especially bad news for McSally, since the RealClearPolitics average of the polls already shows her behind Kelly. If Democrats win the seat in November, it would put them one step closer to taking control of the Senate — and, therefore, Congress as a whole.

Democrats also will decide an interesting primary in Arizona’s flippable Sixth Congressional District, where progressive Anita Malik, a former tech executive, is facing off against the more moderate Hiral Tipirneni, a physician, to run against Republican incumbent David Schweikert in November.

And Republicans will decide a contentious primary in the Maricopa County sheriff’s race, where former sheriff Joe Arpaio, whom Trump pardoned after Arpaio violated a court order meant to stop racial profiling, is running to get his old job back. If Arpaio wins, he’ll face Democratic incumbent Paul Penzone, who beat Arpaio in 2016, in November — and many experts don’t expect Arpaio to fare better this time around.

From the presidential contest and an all-important Senate race to several House elections, Kansas is shaping up to be one of the more unlikely 2020 battlegrounds. The state’s electorate, which tends to skew moderate, seems to be souring on President Trump.

Control of the US Senate could end up being decided here. Running in the Republican primary, vying for the opportunity to succeed retiring Sen. Pat Roberts, are former Kansas Secretary of State Kris Kobach, US Rep. Roger Marshall, and businessman Bob Hamilton.

Kobach is a well-known commodity and has been an immigration hawk for years: “Trump before Trump was Trump” in the words of Patrick Miller, a political scientist in Kansas. Marshall won his US House seat in 2018 before quickly being courted by the Republican establishment to run for Senate after the national party’s preferred choice, Secretary of State Mike Pompeo, declined to enter the race. Hamilton, who started his own plumbing business in the 1980s, is the wild card. He’s put more than $3 million of his own money into the campaign, portraying himself as the archconservative outsider.

Barbara Bollier, a state senator expected to easily prevail in the Democratic primary on Tuesday, has raised more than $7 million so far, much more than any of her potential GOP opponents.

Kansas’s Second and Third congressional districts should be competitive in the general election as well. In the Second, GOP Rep. Steve Watkins, who faces charges of voter fraud, has a primary challenge from state Treasurer Jake LaTurner. In the Third, a crowded Republican field will produce the opponent for first-term Democratic Rep. Sharice Davids.

The Kansas First is almost assured to go Republican in the fall, but Tuesday’s primary election will determine which Republican will replace Marshall, who left his seat to run for the Senate. Tracey Mann, a former lieutenant governor, is considered the frontrunner, though Bill Clifford, a doctor and businessman, has spent more than $500,000 of his own money to try to make the primary competitive.

Though the biggest question on everyone’s mind is whether Joe Biden can reclaim this Midwestern state in 2020, Michigan is boasting a number of other competitive races in November, including Sen. Gary Peters’s (D) bid for reelection and a slew of House races flipped by moderate Democratic candidates in 2018.

Amash’s departure has set up a competitive Republican primary to replace him. The GOP contenders on Tuesday include Iraq War veteran Peter Meijer, state Rep. Lynn Afendoulis, veteran Tom Norton, entrepreneur Joe Farrington, and attorney Emily Rafi. The winner will face Democrat Hillary Scholten, an immigration attorney who is running unopposed and has been putting up big fundraising numbers.

In Michigan’s Eighth and 11th congressional districts, Republicans are squaring off to see who will challenge Reps. Elissa Slotkin and Haley Stevens, two moderate Democrats who flipped their respective districts in 2018. Stevens and Slotkin are both expected to be tough to beat in November, but these races are seen as competitive. And with incumbent Rep. Paul Mitchell (R) retiring from his seat in Michigan’s 10th Congressional District this year, three Republicans and two Democrats are running for the seat.

Finally, unabashed progressive and member of “the Squad” Rep. Rashida Tlaib (D) is up for reelection in 2020. In this safely Democratic district, her primary face-off against Detroit City Council president Brenda Jones — an influential Detroit politician whom Tlaib has run against in the past — will be where the action is.

Democrats in Missouri’s First Congressional District face a rematch between incumbent Rep. William Lacy Clay and challenger Cori Bush, a nurse who campaigned as a progressive champion in the vein of Rep. Alexandria Ocasio-Cortez (D-NY). Clay defeated Bush when she first challenged him in 2018.

The race between Clay and Bush is perhaps more of a generational dispute than an ideological one. Clay, who has served in Congress since 2001, is a member of the Congressional Progressive Caucus and a supporter of Medicare-for-all and the Green New Deal.

Bush, meanwhile, is 20 years younger than the 64-year-old Clay. Her campaign touts her as “protest-to-politics candidate” who organized anti-police violence protests in Ferguson, Missouri, and who promises to continue attending protests if elected to Congress. She was an outspoken supporter of Sen. Bernie Sanders (I-VT) during his 2016 presidential bid.

Additionally, Missouri voters will decide whether to make their state the 38th to expand Medicaid under Obamacare. The state’s Republican leaders have resisted expanding Medicaid, but voters in deep-red Oklahoma recently bypassed their state legislature to expand the program. About 230,000 people could gain health coverage if Missouri voters follow Oklahoma’s lead.

Washington state’s primaries aren’t flashy: In fact, they’ve gotten virtually no coverage in the national press. Yet a close look at three of the most interesting races — in the state’s Third, Eighth, and 10th congressional districts — reveals some important trends for the state of 2020 nationwide.

The state’s House primaries operate on a “top two” system, where candidates don’t compete in separate partisan primaries; instead, all candidates run in an open contest and the top two vote-getters compete against each other in the fall.

In the Third Congressional District, Republican incumbent Rep. Jaime Herrera Beutler is in what one local outlet calls “the fight of her political life” — one of many signs that Republicans are on the defensive in the battle for Congress. She is facing opponents including Democrats Carolyn Long (a repeat challenger and the candidate backed by the Democratic Congressional Campaign Committee), Devin Gray, and Davy Ray, as well as independent candidate Martin Hash.

In the Eighth Congressional District, first-term Rep. Kim Schrier (D) is up for reelection after having flipped the district in 2018. Schrier is crushing a large field of opponents in the race for campaign cash — part of a broader money problem Republicans are having in 2020 congressional races.

And in a race for the safely Democratic 10th Congressional District left open by retiring Rep. Denny Heck, there are close to 20 candidates running to replace him. It’s tough to determine a frontrunner with a massive slate of candidates, but the top tier of candidates includes state Rep. Beth Doglio, former Tacoma Mayor Marilyn Strickland, and former state Rep. Kristine Reeves. Doglio has been endorsed both by Sanders and progressive Washington Rep. Pramila Jayapal, the co-chair of the Congressional Progressive Caucus.