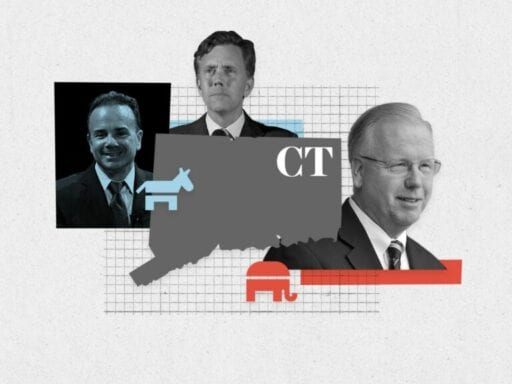 Republicans are homing in on the governor’s seat as the state’s economy continues to struggle.

Connecticut may be historically blue, but Republicans have set their sights on flipping both the governor’s mansion and the state’s open Fifth Congressional District in the 2018 midterm elections.

The GOP is hoping to capitalize on current Democratic Gov. Dannel Malloy’s overwhelming unpopularity — and the state’s struggling economy — to win the 2018 governor’s race. They’re also mounting a vigorous challenge for retiring Democratic Rep. Elizabeth Esty’s seat, one she’s vacating in the wake of blowback she faced over how she handled sexual harassment allegations against a staffer.

But first, both parties have to get through Tuesday’s primary elections. Polls close at 8 pm ET. Live results, powered by Decision Desk, are below.

Connecticut governor: open seat could flip from blue to red

Current Democratic Gov. Dannel Malloy has opted not to pursue reelection, prompting a large pool of Republicans and Democrats to jump into the race. His dismal approval ratings as the state grapples with a sputtering economy aren’t expected to help any potential Democratic successors.

Two business leaders — Bob Stefanowski and David Stemerman — established early leads on the Republican side, but the field has become more level in recent months.

A July poll gave Danbury Mayor Mark Boughton, who also secured the Republican state party endorsement, the edge. Boughton has run for governor before and is leaning into his bipartisan bona fides: He’s currently the Republican leader of a Democratic city.

Businessman Ned Lamont, the winner of the Democratic state party endorsement, is trying to make the case that voters should keep a Democrat in the governor’s mansion. Voters may recognize Lamont’s name from his successful progressive challenge of then-Sen. Joe Lieberman in the state’s 2006 Democratic Senate primary. Lieberman ultimately ran as an independent in the general election, however, and ended up winning that race.

While Democratic candidates have dominated statewide offices in Connecticut as well as several recent presidential elections, historical patterns concerning the governor’s mansion don’t bode well for the party: It tends to switch hands when one party has been in control for a while. Cook Political Report considers this race a toss-up.

Rep. Elizabeth Esty is one of few Democrats leaving the House, with retirements less common on the left in 2018. She announced in April that she would not seek reelection after she faced enormous heat for allegedly mishandling accusations of sexual harassment against one of her staffers.

The district — which Clinton won by roughly 4 percentage points in 2016 — is being targeted by Republicans in the wake of Esty’s departure.

Former Simsbury official Mary Glassman earned the state Democratic Party’s endorsement in May. Glassman has also previously run for lieutenant governor and is emphasizing her government experience as a selling point. Educator Jahana Hayes is on the ballot too.