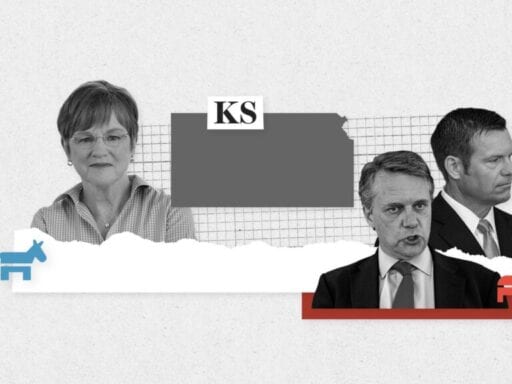 Kris Kobach is challenging incumbent Jeff Colyer in the GOP primary for governor.

There are three key races to watch in Kansas, where voters are casting ballots in Tuesday’s primaries.

The big question in the Republican governor’s primary is whether Kansas Secretary of State Kris Kobach can pull off an upset against sitting Republican Gov. Jeff Colyer. Kobach just secured the endorsement of President Donald Trump (he’s a big Trump ally). There’s a big field of candidates competing on the Democratic side as well.

In addition to the governor’s race, Democrats are watching two House primaries closely. Kansas’s Second Congressional District is an open seat this year. The lone Democratic candidate, Paul Davis (a former candidate for governor), is waiting to see which Republican emerges from a crowded primary field.

Next door in the Third Congressional District, a number of Democrats are vying to compete against incumbent Republican Rep. Kevin Yoder in a district that narrowly voted for Hillary Clinton in 2016.

Current Gov. Jeff Colyer and Secretary of State Kris Kobach are leading the pack of Republicans for governor. Jim Barnett and Ken Selzer are also part of a larger group that will be on the ballot.

Colyer — who took over the governor’s position after Sam Brownback became ambassador at large for international religious freedom earlier this year — has painted himself as the more low-key alternative to Kobach, whose close ties to Trump and broader notoriety precede him. Kobach has long been known for touting hardline anti-illegal immigration policies and is among those most associated with the president’s theories on voter fraud.

Kelly is seen as the leading candidate given her strong fundraising numbers, though she’s recently been snared in a controversy over a vote supporting voter ID laws. Kelly was recruited to the race by former Gov. Kathleen Sebelius.

Kansas’s Second Congressional District: an open seat is looking like a possible pickup for Democrats

There are a lot of Republicans competing in this district, including state Sens. Steve Fitzgerald, Dennis Pyle, and Caryn Tyson, state Rep. Kevin Jones, and former state Rep. Doug Mays. Rounding out the list are Basehor City Council member Vernon Fields and Army vet Steve Watkins. Throughout the primary election, there’s been no clear frontrunner in the bunch.

Whoever wins will face off against former state Rep. Paul Davis, who unsuccessfully ran for governor against former Republican Gov. Sam Brownback in 2014.

Cook Political Report rates this district R+10, but if Democrats are hoping to flip a House seat in conservative Kansas, this may be their best shot. Davis has already far outraised all of the Republican candidates, has the backing of the Democratic Congressional Campaign Committee, and is saving all his money for his general election competitor.

The winner will compete against incumbent Republican Rep. Kevin Yoder, in office since 2011 (Yoder isn’t facing a primary challenger).

Welder, in particular, is looking to test the theory of whether a Sanders-style progressive can win a primary in a conservative state. Cook rates the district R+4, and it also went for Clinton in 2016, so there’s a definite chance it could flip this year.

Hong Kong defies ban to honor Tiananmen Square massacre victims
Virginia just decriminalized marijuana
The Trump administration is using the pandemic as an excuse to target immigrants and asylum seekers
Why the government is investigating Apple, Amazon, Google, and Facebook for antitrust — but not Mic...
Democrats warn of the dangers of war while Republicans fall in line after the killing of Iran’s Qass...
What Trump said about Covid-19 in private versus what he said in public