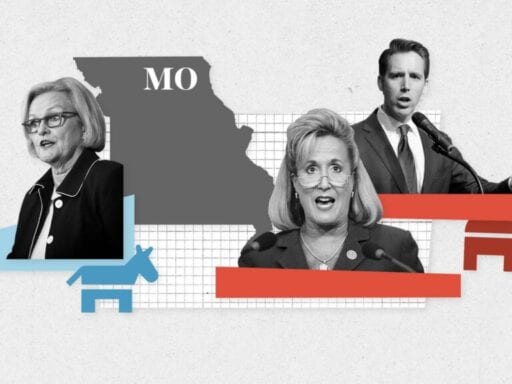 Nominees will be chosen in Missouri’s US Senate race and a key House race. Voters will also decide a statewide ballot initiative.

There probably won’t be many surprises in Missouri’s Senate primary on Tuesday night: The nominees are likely to be Republican Josh Hawley, the state’s attorney general, and Democratic incumbent Sen. Claire McCaskill.

Hawley and McCaskill have essentially been campaigning against each other for months. But there are still crowded fields of lesser-known candidates: a total of seven Democrats and 11 Republicans. After Tuesday, one of the most closely watched Senate races in 2018 will officially be underway.

Other than the Senate race, voters in Missouri’s Second District will choose a Democratic candidate to face off against Missouri Rep. Ann Wagner (Wagner is facing one Republican challenger, a relatively unknown candidate). It’s a conservative district that Democrats are hoping to flip if the 2018 “blue wave” is a strong one.

There’s also a statewide referendum on a ballot question that could tank the state’s right-to-work law.

Missouri Attorney General Josh Hawley is the favorite in a massive field of 11 Republican primary candidates. The state’s Republican Party effectively granted Hawley the nomination when it gave the Republican National Committee the go-ahead to spend money backing Hawley’s campaign before he had even won the primary.

If Hawley prevails, he will likely face two-term Sen. Claire McCaskill, one of the Senate’s most vulnerable Democrats but with an independent streak. McCaskill has some competition in the Democratic primary, but her real focus is on Hawley. You can read more in Vox’s explainer.

McCaskill has faced Republican challenges in 2006 and 2012 — and prevailed each time. But 2018 is expected to be close in the general election, with polls vacillating between the two candidates.

Five Democrats are competing on Tuesday to see who will challenge Republican Rep. Ann Wagner, in office since 2013. Wagner also has a primary challenge from a relatively unknown candidate named Noga Sachs, but in all likelihood, Wagner will win.

Out of the crowded field of Democrats, the frontrunners appear to be attorney Cort VanOstran and Army veteran Mark Osmack. VanOstran has the most campaign cash, but Osmack is also fundraising and has endorsements from VoteVets and politicians including Sen. Tammy Duckworth and Rep. Tulsi Gabbard (both veterans). Osmack is positioning himself as the progressive choice, running on a platform that includes Medicare-for-all, while VanOstran supports shoring up the Affordable Care Act.

Cook rates the district R+8, but if Democrats can field the right candidate and the blue wave ends up materializing, this conservative Missouri district has a chance of becoming blue.

In addition to key races, Missouri voters across the state will vote on Proposition A, a ballot question that will decide whether to keep or scrap the state’s current right-to-work law.

Right-to-work laws allow workers to be in a bargaining unit without having to pay dues to the union; it’s a conservative initiative that many GOP-controlled state legislatures have passed in recent years. Organized labor groups say the laws are tantamount to union-busting and are just another way to weaken unions.

The Missouri legislature passed a right-to-work bill last year, and it was signed into law by former Gov. Eric Greitens, but labor groups stopped it from going into effect with a petition to put the measure on the ballot and let the voters decide.

Voting in favor of Proposition A would keep right-to-work in the state; voting against it would repeal the measure. If voters reject the measure, it would be a major victory for unions.

The not-so-secret life of a TikTok-famous teen
The hidden cost of the Peanuts holiday specials moving from ABC to AppleTV+
Humans are making pandemics more likely
Jen Psaki’s Space Force comment and the ensuing controversy, explained
If the coronavirus hits America, who’s responsible for protecting you?
5 winners and 2 losers from the first night of the Democratic National Convention