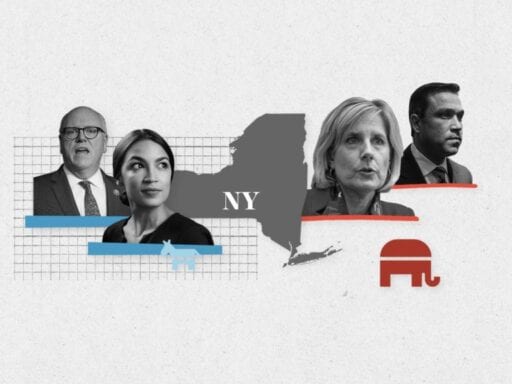 The New York primary elections are Tuesday, and they will set up some of 2018’s most important House campaigns.

At least five House seats in the Empire State should be competitive in the fall. But Tuesday’s primary races aren’t just important — they’re also pretty dramatic. Convicted tax cheat Michael Grimm is trying to get back to the US Capitol in one Republican primary, while a top House Democrat, Joe Crowley, suddenly finds himself in a high-profile contest to keep his party’s nomination.

Polls close at 9 pm Eastern. Live results are below.

Incumbent Rep. Lee Zeldin was first elected in 2014. He was a state legislator before that. He voted in favor of Obamacare repeal but against the tax bill, which, in its rollback of deduction for state and local taxes, particularly hurt high-tax states like New York.

On the Democratic side, it’s a crowded field, with five candidates, but there appear to be two who stand out from the rest. Kate Browning, who fled Ireland during the Troubles and used to be a school bus driver, is one of the top two fundraisers on the Democratic side. But far and away, the money leader is business executive Perry Gershon, who has put at least $600,00 of his own money into the race. Scientist Elaine DiMasi, Bernie Sanders acolyte David Pechefsky and former county official Vivian Viloria-Fisher make up the rest of the field.

This district is rated Likely Republican and R+5, meaning all else being equal, it’s about 5 points more Republican than the country, by Cook Political Report. So this is on the edge of competitiveness. But the district, taking up the eastern half of Long Island, did narrowly vote for Barack Obama twice before backing Donald Trump by 12 points in 2016. It’s going to be an expensive race for Democrats, but they hope there might be enough independent and moderate voters that in an anti-Trump year, they can pull off an upset.

Suffolk County official DuWayne Gregory is back after losing to 13-term Rep. Peter King pretty badly in the 2016 election. He’s touted his legislative experience while his competitor, consultant Liuba Shirley, has emphasized her grassroots activism.

Shirley made headlines in May when she gained FEC approval to use campaign funds for child care. She’s posted an impressive fundraising haul and gained the endorsements of Emily’s List, which helps elect Democratic women candidates who support abortion rights, and Bernie Sanders-aligned group Our Revolution.

The district, rated R+3 by Cook Political Report, has been named to the Democratic Congressional Campaign Committee’s (DCCC) list of targets, amid strong Democratic performances in recent elections for local office.

Thus far, the Democratic candidates have slammed King’s ties with the president, as well as his role in advancing a tax bill that did not include local and state tax deductions. Despite the district’s conservative lean, active registered Democratic voters actually outnumber Republican ones.

Incumbent Rep. Dan Donovan is trying to fend off former Congress member and convicted tax evader Michael “I’ll break you in half, like a boy” Grimm, the man Donovan replaced in 2016.

Grimm is attacking Donovan as a soft Republican, for voting against the tax bill and Obamacare repeal. He got the backing of Steve Bannon and Anthony Scaramucci, for whatever it’s worth. He also bizarrely claimed Donovan had told him that he would seek a pardon for Grimm from Trump if Grimm didn’t challenge him in the primary.

There is a lot going on here, and we do have one public poll that showed Grimm leading Donovan by 10 points, But Trump has sided with Donovan in the intraparty fight. This will be one of Tuesday’s most closely watched elections.

Max Rose — a post-9/11 combat veteran in this Staten Island district — has earned the DCCC’s Red to Blue imprimatur, which means they’re pretty excited about him. He has also raised by far the most money, though at least one other candidate — union-backed, Medicare-for-all-endorsing Omar Vaid — has cracked six figures.

Cook thinks this R+3 district leans toward the Republicans, though that could certainly change if Grimm and his baggage earn the GOP nomination. The district narrowly supported John McCain over Barack Obama in 2008, backed Obama over Mitt Romney in 2012, and then went 10 points for Trump in 2016.

She is portraying Crowley as corporate-funded, while talking up her progressive bona fides through her support of Medicare-for-all, a jobs guarantee and other economic justice issues. Crowley was tsked by the New York Times editorial board recently for skipping a primary debate with his challenger.

Listen, Crowley is a 10-term incumbent and might be more worried about whether he can move up in Democratic leadership if his party retakes the House than about his primary. But it’s worth monitoring, given the enthusiasm for Ocasio-Cortez among some lefty groups and publications.

Because this is a D+29 district, according to Cook, it’s not going to be competitive in November.

There are a bunch of viable candidates challenging incumbent Republican Rep. John Faso. Antonio Delgado is an attorney and Rhodes scholar raising a lot of money. Pat Ryan is running on a gun control message. Businessman Brian Flynn is putting a lot of his own money in the race. Gareth Rhodes is a former Andrew Cuomo staffer with the Times’s endorsement. Minister Dave Clegg is a longtime community leader. Former diplomat and CIA officer Jeff Beals and Erin Collier, a former economist in the Obama administration and the only woman in this race, are also running. It’s really wide open.

Cook rates this race as R+2 and a straight-up toss-up, so it should be competitive no matter who emerges on the Democratic side. Obama carried it twice, then Trump won by 7 points in 2016. Expect Democrats to hammer Faso over health care, where they will portray him as one of the decisive votes after he helped move the House repeal bill out of the budget committee.

A crowded field is vying to take on incumbent Elise Stefanik, the youngest woman ever elected to the House and pursuing a third term. Former St. Lawrence County official Tedra Cobb boasts a fundraising edge. Cobb and former Bernie Sanders delegate Patrick Nelson were among the candidates scrapping over the support of progressive groups. At one point, it was unclear whether Nelson, who has been endorsed by Our Revolution’s local affiliate, or Cobb, who’s garnered the support of Indivisible, had secured the backing of the New York Progressive Action Network.

Cook Political Report rates the district, which voted heavily for Trump, as R+4. Nevertheless, Democrats see it as a potential opportunity to snag a win as they seek a “blue wave.” Ahead of the election, Stefanik has endeavored to frame herself as an independent voice who’s focused on the economy.

Five candidates are jockeying for an opportunity to face Rep. Tom Reed, who has served in the House since 2010 and has a voting record pretty consistently in line with Trump’s policy priorities, in November. They are former cardiologist Linda Andrei, retired Air Force Gen. Max Della Pia, small-business owner Ian Golden, former university administrator Tracy Mitrano, and attorney Eddie Sundquist.

The R+6 Southern New York district is among the DCCC’s numerous New York targets. Reed has accrued a sizable war chest as he strives to stave off a challenger this fall. “There is a wave out there that I do see coming, and I think to deny that is an unwise position to take,” Reed told the Washington Post in April.

Another divisive Democratic race, with incumbent Rep. John Katko waiting in November. Juanita Perez Williams has the support of the DCCC. She ran for mayor of Syracuse in 2017 but lost pretty handily to an independent candidate. Still, she’s a former Navy officer who grew up in a migrant community, and the national Democrats like her profile. She is facing Dana Balter, who has the support of a few notable progressive groups and is running on Medicare-for-all.

This has classically been one of the nation’s top swing districts. Cook actually rates it as D+3 but Likely Republican — that may reflect Williams’s late entry into the race and Cook’s belief, apparently shared by national Democrats, that Balter would be a weak general election candidate. This is a district that voted overwhelmingly for Obama in 2008 and 2012 and still supported Hillary Clinton over Trump by 3 points in 2016.

How the US created a disaster in Afghanistan