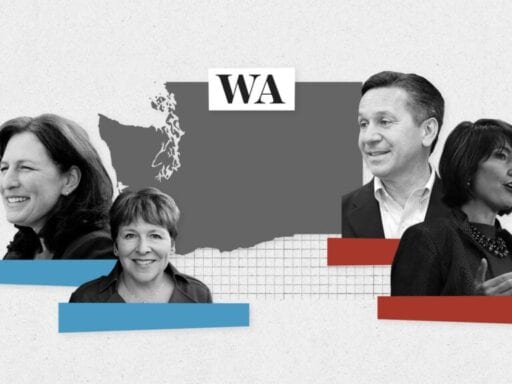 On Tuesday, Washington voters are casting their primary election ballots in three competitive House races that Democrats are eyeing as major pick-up opportunities in the 2018 midterm elections.

There’s a scuffle in the Third Congressional District over incumbent Republican Rep. Jaime Herrera Beutler’s seat, a Democratic push in the Fifth District aimed at unseating Rep. Cathy McMorris Rodgers, and an all-out brawl over an opening in the Eighth District following Rep. Dave Reichert’s retirement.

Polls close at 11 pm Eastern. Live results, powered by Decision Desk, are below.

Washington state has a top-two primary system, which means Democratic and Republican candidates are on the primary ballot together. The top two vote-getters will face off on in the November general election.

This historically conservative district is among those that Democrats are trying to flip this cycle, although incumbent Republican Rep. Jaime Herrera Beutler has swept her reelection races by double digits in the past. Washington State University professor Carolyn Long has garnered the backing of national groups like Emily’s List, which works to get pro-abortion rights Democratic women elected to office, and is seen as the Democratic frontrunner.

While the district went for Donald Trump by 8 points in 2016, Cook Political Report downgraded the district from Solid Republican to Likely Republican this past spring, suggesting that Democrats might have more of a fighting chance. Earlier this year, Long released an internal poll that indicated she is within 5 percentage points of Herrera Beutler.

Washington’s Fifth Congressional District: a Republican giant faces down the rumbling of a blue wave

Rep. Cathy McMorris Rodgers, the fourth-highest ranked Republican in the House, is facing one of the toughest reelection fights of her career.

While it’s uncommon for Republican leaders like McMorris Rodgers to lose their bids for reelection, it’s not without precedent. Democrats think momentum could be on their side: Trump captured just over 52 percent of the vote in the district in 2016, and constituents have hammered McMorris Rodgers for hewing too close to the president.

The Cook Political Report has shifted its rating on the eastern Washington district from Likely Republican to Lean Republican, though polls suggest that McMorris Rodgers maintains a slim lead over challenger Lisa Brown, a former state Senate majority leader.

Washington’s Eighth Congressional District: a slew of Democrats attempt to retake the district

Democrats see incumbent Republican Rep. Dave Reichert’s retirement as a potential opportunity to capture the district, which Cook rates as a toss-up.

The district is also one of more than 20 held by Republicans that Hillary Clinton won in 2016. Interestingly, it’s backed Democratic presidential candidates for numerous races in the past while favoring Republicans for the House seat.

An expansive field of candidates including pediatrician Kim Schrier, former prosecutor Jason Rittereiser, and doctor Shannon Hader has lined up for the chance to turn the district blue. The Republican frontrunner is former state Sen. Dino Rossi, who’s also previously mounted failed bids for a Senate seat and the governorship.

Here are the 13 movies people will be talking about in October
I’m an Instacart shopper. I buy groceries so others can socially isolate.
The genius of Aretha Franklin, explained by “I Say a Little Prayer”
Democrats want the FBI to investigate Cindy Yang, the massage parlor founder accused of selling acce...
Democrats unite to condemn Trump tweet linking Ilhan Omar and 9/11
The Masked Singer is a televised abomination I’m going to devour every second of