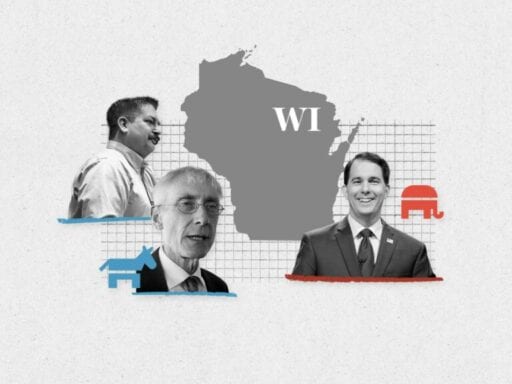 There’s a bitter Republican contest to oust Sen. Tammy Baldwin and a deep bench of Democrats looking to kick out Gov. Scott Walker.

A Democratic mudslinging match over the future of Paul Ryan’s seat, a Republican battle royal to oust Democrat Sen. Tammy Baldwin, and a deep bench of Democrats vying to face Republican Gov. Scott Walker all come to a head in Tuesday’s Wisconsin primary elections.

Voters go to the polls August 14 to pick their party candidates for the Badger State’s Senate, governor, and House races. Walker is up for reelection, as is Baldwin, one of the 10 red-state Democrats trying to hold on to their seats in 2018. Democrats are also eyeing a couple of Republican-held House seats they think they can flip — including retiring Speaker Ryan’s district.

Polls close at 8 pm CT. Vox will have live results for the key races below, powered by Decision Desk.

Wisconsin governor: Democrats have another shot at Scott Walker

Gov. Scott Walker is up for reelection again, and Democrats are hoping 2018 is the year they can finally kick him out of the governor’s mansion.

More than eight Democrats have filed to run in Wisconsin’s gubernatorial primary.

Tony Evers, the state’s public education chief, is in the lead, but polling has been scarce, and several other candidates have pulled in notable endorsements and fundraising. Mahlon Mitchell, the president of the Professional Fire Fighters Association, has the support of California Sen. Kamala Harris, and Kelda Helen Roys, a former state Assembly member, has the backing of New York’s Sen. Kirsten Gillibrand (and Wisconsin’s most famed indie band, Bon Iver). State Sen. Kathleen Vinehout (who has run in a Democratic gubernatorial primary before) and political activist Mike McCabe have also gotten progressive support.

Walker will be a formidable challenge, having won three elections in eight years in Wisconsin. But his failed 2016 presidential campaign tanked his popularity in the state, something he has been campaigning hard to fix. Polls show him in a tighter race this year with his Democratic challengers than in any of his past races.

Sen. Tammy Baldwin is up for her first reelection, and Republicans are gunning for her seat. But a bitter Republican primary risks leaving the party bruised for the general election. The race is between state Sen. Leah Vukmir and former veteran/ex-Democrat Kevin Nicholson.

The Republicans have pushed each other to the right and embraced President Trump. Nicholson’s history as a Democrat and Vukmir’s initial resistance to embrace Trump in 2016 have been used against them.

Baldwin was supposed to be vulnerable, as a relatively low-profile Democrat in a state that voted for Trump. But early polling has shown her ahead of both Vukmir and Nicholson by 10 points or more — and it doesn’t help that Republicans have spent months beating up on their own.

Paul Ryan is retiring — and Democrats think they can flip his congressional district blue.

Two candidates — Randy Bryce, a populist ironworker and union organizer who goes by the nickname “Ironstache”; and Cathy Myers, a school board member and teacher — are in a bitter battle for the chance to win Ryan’s seat in Congress.

Bryce gained a national platform after releasing a viral campaign ad in the summer of 2017, raking in donations and winning some high-profile endorsements, like that of Sen. Bernie Sanders.

But he’s had media flubs and faced questions over past arrests for marijuana use and a DUI, and his past failures to pay child support. Myers, who has won elected office in the area, has been actively attacking Bryce’s character and his lack of policy chops. It’s made for an ugly race — and one that could damage both candidates for the general.

The Republican primary looks much more straightforward. Bryan Steil, a well-known local business executive with Ryan’s endorsement, is the favorite to win the Republican nomination.

Wisconsin’s Seventh Congressional District: an opening for Democrats in the north

Covering much of northern Wisconsin, this is the half-rural, half-urban kind of district Democrats are eying across the country in 2018. Health care is playing a major role in this race, after incumbent Republican Rep. Sean Duffy voted for the GOP’s deeply unpopular Obamacare repeal bill last year.

Two Democrats — Margaret Engebretson, an attorney, veteran, and former railroad union worker; and Brian Ewert, a doctor at the Marshfield Clinic — are hoping they can unseat him.