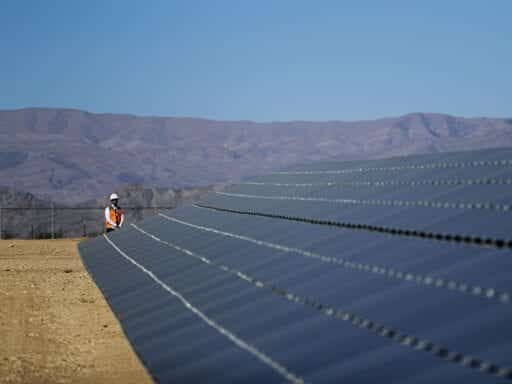 Voters could require the state’s electricity supplies to shift to 50 percent renewable energy by 2030.

Question 6 on Nevada’s ballot this year would mandate that the state’s electricity suppliers reach 50 percent renewable energy by 2030. As of Wednesday, November 4, at 10:50 am ET, more than 56 percent of ballots were cast in support of the measure, with more than 80 percent of the vote reported, according to Vox’s partners at Decision Desk.

The initiative is less about voters changing where their electricity comes from than putting an exclamation point on a decision they’ve already made — in 2018, Nevadans passed the exact same initiative. It just so happens that, to amend the state constitution, voters must pass an initiative twice. So it’s back on the ballot this year, and expected to pass again by similarly enthusiastic margins.

There’s been a significant push for Nevada to quickly move toward renewable energy in recent years — and one that has seen some setbacks. In 2017, the state legislature passed a bill that would have mandated 40 percent renewable energy 2030, but then-Gov. Brian Sandoval (R) vetoed it. In 2019, the bill was bumped up to 50 percent, passed again, and newly elected Gov. Steve Sisolak (D) signed it.

So a successful Question 6 will makes a bill and a constitutional amendment, both mandating 50 percent renewables. Nevada is serious about this!

Nonetheless, most backers will be happy to have a target that can’t be overturned by subsequent administrations, so Question 6 is likely to be approved.

A yes vote means the state’s electricity suppliers will be constitutionally mandated to reach 50 percent renewable energy by 2030.

A no vote would mean the mandate will not be added to the constitution. A law with the same target will remain on the books, but could be overturned by a court challenge, or amended by future lawmakers.