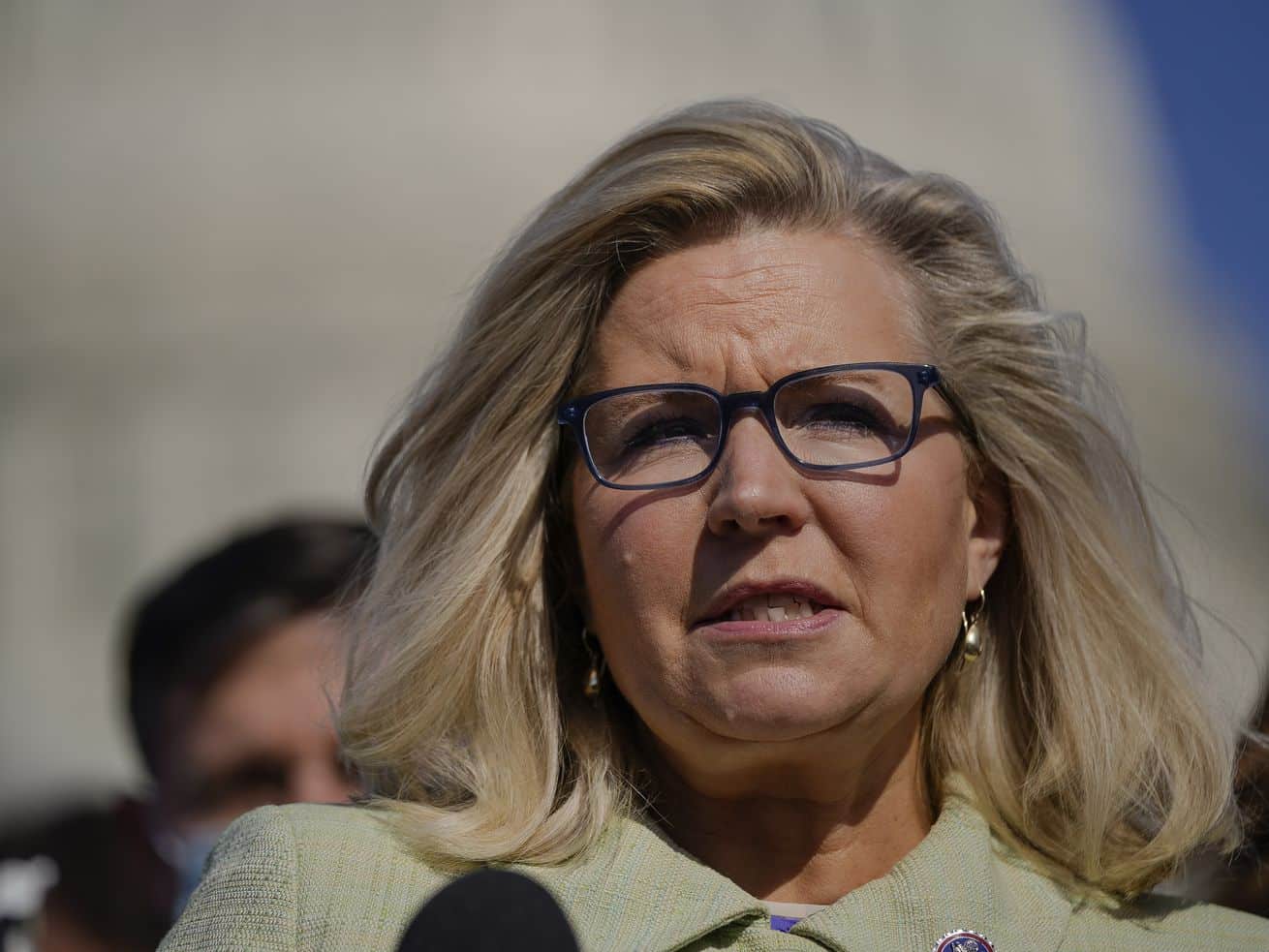 If Trump critics end up purged from the GOP, the next electoral crisis will be even worse.

House Republicans have removed Rep. Liz Cheney (R-WY) from her leadership position — for the sin of reiterating that she strongly condemns former President Donald Trump’s attempt to overturn the 2020 election result.

In February, the House GOP batted down an initial effort to oust Cheney from her role as the No. 3 House Republican for the same reason. She survived easily, in a closed-door, secret ballot vote of 145 to 61. Cheney’s views have not changed since then. The problem now is just that she’s kept talking about those views.

“The 2020 presidential election was not stolen. Anyone who claims it was is spreading THE BIG LIE,” Cheney tweeted this month, referring to Trump’s false claim that the 2020 election was rigged against him.

Cheney’s tweet was just one of several recent statements that have annoyed Republicans who think accurately describing Trump’s attempted election theft is unhelpful for the party’s message, given that most GOP voters believe the election was stolen from Trump. As a result, House Minority Leader Kevin McCarthy declared he was “fed up” with Cheney, and backed a bid from Rep. Elise Stefanik (R-NY) to replace her.

Cheney was removed from her post in a voice vote of the GOP conference Wednesday morning. But she isn’t backing down — she told reporters afterward that “I will do everything I can to ensure that the former president never again gets anywhere near the Oval Office.”

Some Democrats have claimed that every Republican who refuses to back Trump’s bogus election fraud narrative is now being purged from the party. Things are not quite so simple — not yet, at least. Mitch McConnell, who also harshly condemned Trump’s actions on January 6, remains ensconced as Republican leader in the Senate, despite the former president’s urging of senators to dump him.

But McConnell’s behavior reveals the limits of what’s acceptable. He faced his own grumblings of discontent within his conference as he criticized Trump, and he eventually voted to acquit the former president during his second impeachment trial. Since then, McConnell has been careful and guarded about his comments on Trump, and he’s fully on board with the GOP strategy of moving on to focus on criticizing the excesses of the Biden administration and trying to win in 2022.

With supposedly “reasonable” Republicans deeming it gauche to point out that Trump’s claims of a stolen election are nonsense, those claims just keep spreading unchecked in conservative spaces (as seen in the troubling Arizona election “audit”).

And yet, while the media and Democrats may love a doomed principled stand, if Republicans who do speak out against Trump’s lies quickly see their careers implode and get replaced by Trump loyalists, it’s hard to see how they’re helping much — because they won’t be around anymore to temper the GOP’s response to a future electoral crisis.

What did Liz Cheney do?

Cheney, the daughter of former Vice President Dick Cheney, was a rising star in the House GOP. Having entered Congress just four years ago, she’d already risen to become conference chair, making her the third-highest-ranking Republican in the House, and she was viewed as a potential future House speaker or even presidential candidate.

Then Donald Trump started trying to overturn the results of the 2020 election. Making false claims of massive voter fraud, Trump tried to get Republican officials in key states not to certify legitimate Biden victories. When those efforts failed, he moved on to an attempt to get congressional Republicans to reject those state results on the day Congress would count Electoral College votes: January 6.

In the days before the storming of the Capitol, Cheney recoiled at Trump’s behavior. She wrote a 21-page memo to House Republicans saying there was “no appropriate basis” for rejecting state results, and that a move to do so would “set an exceptionally dangerous precedent.” Then, when audio leaked of a Trump call in which he pressured Georgia Secretary of State Brad Raffensperger to “find” votes for him, Cheney said it was “deeply troubling.”

Then, on January 6, Trump gave his infamous speech on the Ellipse (in which he criticized Cheney by name), and his supporters broke into the Capitol afterward. “A violent mob attacked the United States Capitol to obstruct the process of our democracy and stop the counting of presidential electoral votes,” Cheney said in a statement the following week. “The President of the United States summoned this mob, assembled the mob, and lit the flame of this attack.” She added: “There has never been a greater betrayal by a President of the United States of his office and his oath to the Constitution. I will vote to impeach the President.”

Cheney’s political future has been in question since then, with Trump vowing to back a primary challenger against her in 2022.

But as mentioned above, Republicans overwhelmingly opted to keep Cheney in her leadership post the first time she was challenged, in early February. What’s happened since then is that she’s kept on being the skunk at the garden party.

The current drama was kicked off during the House GOP’s recent policy retreat in Orlando. Cheney made headlines by opining to a New York Post reporter that anyone who supported Trump’s effort not to certify the 2020 election result isn’t fit to be the GOP’s presidential nominee. Politico’s Melanie Zanona reported that House Republicans began “buzzing about Cheney” at the retreat, viewing her as “an unwelcome distraction” from the party’s message, and McCarthy said that leaders need to be part of “one team.”

Cheney’s fist bump with President Joe Biden during his address to Congress a few days later didn’t help matters, but things really intensified Monday when Trump issued a statement saying the “Fraudulent Presidential Election of 2020” should be known as “THE BIG LIE” — trying to turn his critics’ rhetoric back on them, by insisting Biden’s win was the lie. Cheney then shot back on Twitter.

The 2020 presidential election was not stolen. Anyone who claims it was is spreading THE BIG LIE, turning their back on the rule of law, and poisoning our democratic system.

The next day, Kevin McCarthy said in a Fox News appearance that he’s heard a lot of criticism of Cheney, and then told the host on a hot mic that he’s “had it” with Cheney, according to Axios. He claimed the problem is not her views on the election, it’s that her leadership role requires her to be a team player and put disagreements with her fellow Republicans aside, rather than foregrounding them. Cheney’s spokesperson fired back: “This is about whether the Republican Party is going to perpetuate lies about the 2020 election and attempt to whitewash what happened on Jan 6. Liz will not do that.”

And that proved to be that. Leaks poured out suggesting Cheney was doomed, and Stefanik (a rising star herself who has proven eager to defend Trump at key moments) decided to make a play for her job. Soon, McCarthy, House Minority Whip Steve Scalise (R-LA), and Trump had all endorsed Stefanik, making Cheney’s effective excommunication inevitable. That excommunication took place Wednesday morning.

Naturally, the response from many Democrats has been to condemn the awful intolerance of the Republican Party and the cravenness of its leaders, and to praise those rare few who tell the truth, like Cheney.

There is a practical problem here, though. If Cheney tells the truth, is run out of the GOP for it, and is replaced as Wyoming’s representative by a hardcore Trumpist who’d try to overturn the 2024 election — how does that improve things?

The fact looming over all this is that most Republican voters really do believe Democrats stole the election, because they’ve bought into Trump’s alternate reality. Most elected Republicans know that’s not true, but many publicly pretend otherwise for political reasons. (Even though many Republicans backed Trump in their public rhetoric and cast votes in favor of his doomed challenges, the lopsided secret ballot vote in Cheney’s favor back in February indicates there was broader agreement with her in private among the House GOP.)

As experience has repeatedly shown, if you’re a Republican politician who becomes viewed as an enemy of Trump, your own voters won’t have your back. Vocal Trump critics like former Sens. Jeff Flake and Bob Corker retired rather than face Republican primary voters again. Another, Rep. Mark Sanford, lost his primary. A fourth, Rep, Justin Amash, quit the party to avoid that fate, and then decided not to run for another term.

Surviving as an elected Republican who has deep disagreements with Trump requires diplomacy and strategy. This is easier in the Senate, where there are six-year terms, than in the House, where lawmakers can be primaried every two years.

Notably, Sen. Ben Sasse (R-NE), a one-time “Never Trumper,” silenced practically any criticism he had of Trump in the year or so before his 2020 primary. Once his reelection was in the books (and his next one wasn’t until 2026), he was emboldened to speak out again, revealing important information about Trump’s January 6 conduct and voting to convict him at his second impeachment trial. It’s easy to call Sasse craven, but if he’d spoken out and lost his primary, that would’ve been one fewer senator holding Trump accountable.

It’s important to note why, as messy as things got last winter, Trump never got particularly close to actually overturning the election result. It’s because, despite the public rhetoric and doomed votes from many in the GOP, most Republicans in key positions — governors, state officials, state legislature leaders, most senators, and the vice president — did not in fact use the powers of their offices to help Trump steal the election, even though Republican voters largely wanted them to do so. The elites rejected their voters’ preferences in favor of adhering to the law, the facts, and democratic norms.

McConnell, then the Senate majority leader, was among them. At the key moment, he opposed Trump’s effort to get Congress to overturn the election results. Despite conspicuous silence as the Georgia elections hung in the balance, on January 6 (before the rioters broke into the Capitol) he stood up for democracy, saying his vote to uphold the outcome would be “the most important vote I’ve ever cast.” And, partly because of the signal he sent, Republican senators voted overwhelmingly to reject Trump allies’ challenges to the Arizona and Pennsylvania election results.

Of course, Republicans who do stand up to Trump at the proper time may well be dooming their careers anyway — as Brad Raffensperger may have. But Raffensperger’s defense of the Georgia results as legitimate served a very important function last year. If a more unscrupulous actor were in that position and proved pliable to Trump’s pressures, things could have gotten significantly uglier. And if Raffensperger had spent much of the previous years criticizing Trump and lost his 2018 primary to a Trump loyalist, well, he wouldn’t have been around to play that role in 2020.

To preserve American democracy, the Republican Party needs elites who will be willing to act to defend it at key moments. The uncomfortable reality is that, for those elites to hold on to their jobs, they may need to do a whole lot of lying or at least hold their tongues before those key moments. Otherwise, they will be purged and replaced with Trump true believers or cynical opportunists — ensuring that, if and when the next electoral crisis comes around, no one will be left who will be willing to do the right thing.