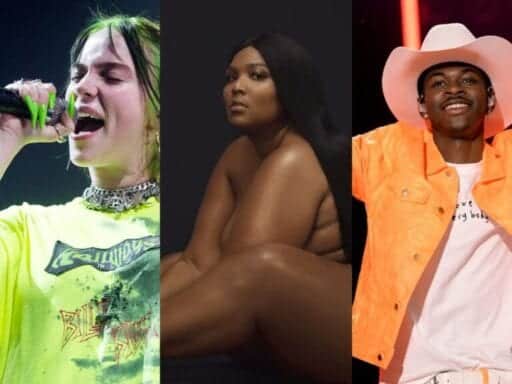 Ariana Grande, Bon Iver, and Lana Del Rey round out the pack.

For some music aficionados, the Grammy Awards are the most important event of the year. Good news for them: The road to January 26, 2020, and the 62nd rendition of the annual ceremony has begun as the nominees have officially been announced.

Leading the pack is Lizzo, with eight nominations. The flutist-rapper-singer-dancer extraordinaire is up for some of the biggest Grammys, including Album of the Year, Song of the Year, and Record of the Year. Lizzo’s nominations — her first — are a fitting capper to an impressive year for the artist, whose songs “Truth Hurts” and “Juice” ruled the charts in 2019.

Also earning their first Grammy nominations are 17-year-old pop wunderkind Billie Eilish and 20-year-old genre-blending rapper Lil Nas X, who follow closely behind Lizzo in the overall field with six nominations each. Next comes the more seasoned Grammy nominee Ariana Grande with five nominations, including her first-ever nod in the Album of the Year category for the revelatory thank u, next, led by the single “7 rings.”

A surprise big category squeaker — there’s always one! — is Lil Nas X, whose remix of “Old Town Road” featuring Billy Ray Cyrus became an inescapable earworm this year. The hit country-trap single broke Billboard chart records and spawned numerous remixes, so its Record of the Year nomination is expected and deserved, as is Lil Nas X’s Best New Artist nod. But his Album of the Year nomination for his debut EP, 7 — which features two versions of “Old Town Road” and five other comparatively scant tracks — has left us scratching our heads.

Also up for Album of the Year are works by a trio of artists who transcended indie tastemakers’ playlists to find mainstream success: i,i by Bon Iver, who previously won Best New Artist (after the release of Bon Iver, Bon Iver in 2014); Father of the Bride by Vampire Weekend, marking the band’s first-ever Grammy nod in one of the award’s top three categories; and Norman Fucking Rockwell! by Lana Del Rey, who has been nominated for multiple Grammys in the past, but never Album of the Year.

A notable omission is Lover by Taylor Swift, which was well-received as both a maturation and return to country-pop form for the singer. Although the title track and “You Need to Calm Down” received individual nominations, the album itself was relegated to Best Pop Vocal Album — not the most visible of categories. It’s possible that Swift cut it too close to the Grammys’ window of eligibility to garner much notice from voters for the full-length LP. Lover was released on August 23, just ahead of the Grammys’ cutoff on August 31.

Below, we’ve listed all the nominees in the Grammys’ four major categories, which recognize artists across all genres.

Visit the Grammys’ website for the full roster of nominees in all 84 categories.

Album of the Year

(This award is given to an entire album and all of its songs.)

Song of the Year

(This award goes to the songwriters of a song.)

Record of the Year

(This award goes to the overall production of a single song and is awarded to the artist who records it.)