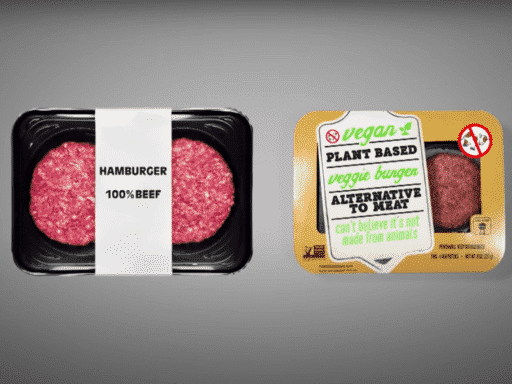 The European Parliament voted down a ban on food labels that compare plant-based products to their meat counterparts.

Plant-based food makers will still be able to sell products labeled “veggie burgers,” the European Parliament voted on Friday after a week of negotiations.

Why was this up for debate in the first place?

After decades in which veggie burgers and cheese-style vegan spreads have enjoyed their place on the grocery store shelves without controversy, the animal agriculture industry has begun to feel threatened by them in the last few years. Consumption of plant-based foods has increased, especially as the pandemic has damaged supply chains and raised questions about the public health implications of our crowded, disease-ridden factory farms.

And across the United States and the U.K., agriculture lobbies have been fighting back in the same way: trying to make it illegal for their competitors to advertise with labels like “burger” or “sausage.” (Try “tofu patty” or “protein tube.”)

The EU already, three years ago, banned dairy-specific terms like “soy milk” and “vegan cheese,” but it allowed for comparisons on labels, such as “yogurt-style vegan snack.” The proposal under consideration this week would have banned those comparisons as well as banning the use of terms associated with meat products, like “wurst” and “schnitzel” (think “vegan schnitzel”). Ultimately, lawmakers rendered a split decision, banning “yogurt-style” comparisons of nondairy products to similar dairy products but not extending the ban to meat products.

The ostensible justification for such a ban is that consumers are confused. “Marketing is disconnected from the real nature of products, which is just asking for things to spin out of control!” Jean-Pierre Fleury, a spokesman for the EU farmer’s association, claimed.

But opponents of the bill have mocked the assertion that consumers can’t tell the difference between a plant-based alternative meat product and a meat product. “One is a beef burger. One is a plant-based burger,” a satirical Dutch commercial criticizing the proposed ban says, showing the very obvious packaging differences between the products. “But which one is which? It’s impossible to tell. Because they both contain the word ‘burger’.” (You can watch the whole commercial below).

But there’s a broader context beyond the labeling of these products. For a long time, plant-based meat was a niche product enjoyed only by vegans and vegetarians; it is now a mainstream one. That has the meat industry — both in America and abroad — fighting back.

The rise of plant-based meat

The EU this week has been negotiating the next EU Common Agricultural Policy. One of the most discussed proposals under consideration was the “veggie burger” ban.

But on Friday, the European Parliament’s Committee on Agriculture and Rural Development released a press statement announcing that the members of the European Parliament “rejected all proposals to reserve meat-related names for products containing meat. No change for plant-based products & names they currently use when being sold.”

That means the preexisting ban on dairy labels like “soy milk” will remain in place — even expanded to cover descriptions such as “milk-like” — but it won’t be brought to bear against plant-based meat labelled with words like “burger.” It was a defeat for the animal agriculture industry groups that had pushed for the change.

Vegetarians make up only about 3 percent of consumers in the US and the EU. They’re not really a threat to the dominance of the factory farming industry. What makes plant-based products a threat is their appeal to a completely different group of consumers: meat-eaters who have found that plant-based products fit into their diet and lifestyle while being much better for animals and the environment.

Caroline Bushnell oversees retail research at the Good Food Institute, a nonprofit that works to promote meat alternatives. “Veggie burgers have been around for many decades,” she told me last year. “Plant-based meats are still just getting started. The next generation is really designed for meat eaters, so the stakes are higher for what the products need to deliver on. People really like the taste of meat. Instead of trying to convince them to eat a kale and quinoa bowl, why not try to make meat for them in a better way?”

So far, the rise of plant-based meat has not cut into the demand for animal-based meat at all — before the pandemic, the factory farming industry was seeing record demand, driven by overall global economic growth. But there’s some reason to think that in the long run, the slaughtered meat industry might really lose market share to the plant-based meat industry. Polls in India and China find more than 60 percent of consumers say they are “very likely” or “extremely likely” to purchase plant-based meat.

As concerns grow worldwide about the impacts of factory farming — on animals, on the environment, and on global public health — the share of consumers open to alternatives might continue to grow.

“We have this great moment of innovation in our industry where these products are better than ever,” Jaime Athos, the CEO of Tofurky, told me last year as his company fought a veggie burger ban law in Arkansas. “They’re more widely available, too. And suddenly people are worried consumers might be confused. The reality is that this is a proactive decision on the parts of consumers — they understand that plant-based products are healthier for them and healthier for the environment.”

In several US states, the agriculture industry has responded to the rise of plant-based products with label bans like the one the EU just rejected. Their motivations are often explicitly protectionist: They want to shield slaughtered meat products from plant-based competitors.

“This bill will protect our cattle farmers from having to compete with products not harvested from an animal,” said Mississippi Farm Bureau Federation president Mike McCormick in January when Mississippi’s veggie burger ban law passed in the state House.

“We must protect our industry in this state: agriculture. It’s the No. 1 industry in the state of Louisiana,” state Rep. Francis Thompson argued during legislative hearings in Louisiana earlier this year.

In the US, veggie burger bans largely haven’t held up in court on First Amendment grounds. A judge granted an injunction against Mississippi’s law, concluding it was likely to be unconstitutional. When California tried a ban on “soy milk” and similar labels, the US District Court for the Northern District of California struck it down, writing, “The crux of the claims is that a reasonable consumer might confuse plant-based beverages such as soymilk or almond milk for dairy milk, because of the use of the word ‘milk.’ The claim stretches the bounds of credulity. Under Plaintiffs’ logic, a reasonable consumer might also believe that veggie bacon contains pork, that flourless chocolate cake contains flour, or that e-books are made out of paper.”

In the EU, though, there is no First Amendment and no strong judicial tradition protecting non-misleading commercial speech. The ban on labels like “soy milk” went into effect three years ago, forcing producers to transition to labels like “yogurt-like” and “similar to cheese!” — which the EU will now ban as well.

This year, the agriculture lobby attempted to follow that ban up with a more comprehensive ban, which would prohibit words like “burger” and “sausage” for products that do not contain slaughtered animals.

The proposal attracted widespread attention — in some cases to the frustration of environmental activists in the EU. They pointed out that the negotiations also covered other critical agricultural guidelines, which also encouraged a transition away from meat toward a healthier global climate, but attracted much less attention than the “veggie burger ban.”

Other agricultural issues deserve attention and scrutiny too, but the veggie burger ban shouldn’t be dismissed as a sideshow. It was a calculated power grab by an industry that is cruel to animals and workers alike, devastates the environment, and puts us at risk of another pandemic. It was aimed at stifling the growing new industry that offers an alternative.

It is a good thing that the EU voted the veggie burger ban down — and it will be a good thing if they similarly relax their restriction on soy milk, and if legislators in the many US states that have entertained burger bans of their own follow suit. Letting consumers choose other products is one of the most powerful tools available to change factory farming — which is, of course, precisely why the factory farming lobby has thrown so much effort into interfering with it.

Trump is counting on the Supreme Court to help him steal the election
Trump’s deployment of federal agents in Portland is exactly how not to police protests
Report: Massachusetts rarely fires state troopers, “no matter what they have done”
Gyms aren’t making it easy for people to cancel memberships
This one weird trick can help any state or city pass clean energy policy
Susanna Clarke’s astonishing Piranesi proves she’s one of the greatest novelists writing today