Loss, trauma, and injustice: On being Black and dying from a broken heart 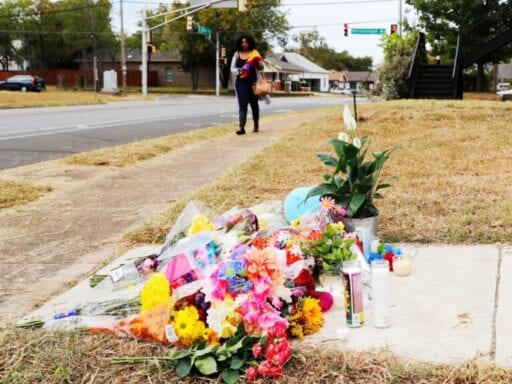 Share
Loading...
Lynda Menefee walks up to the home of Atatiana Jefferson in Fort Worth, Texas, to leave flowers at a memorial, on October 15, 2019. | Tony Gutierrez/AP

The father of Atatiana Jefferson is one of too many lost to grief, trauma, and injustice.

On Saturday, 58-year-old Marquis Jefferson died after a cardiac arrest and heart complications, a family spokesperson told the New York Times. Marquis was the father of Atatiana Jefferson, a 28-year-old Black woman who was shot and killed by a white police officer while she was playing video games with her nephew last month. Bruce Carter, the family spokesperson, believes mourning for Atatiana, and fighting to attend her funeral, contributed to Marquis’s death: “I can only sum it up as a broken heart.”

The same diagnosis was said of 27-year-old Erica Garner, who died in 2017 of a heart attack not long after giving birth. She fought tirelessly for justice for her father, Eric Garner, who died in 2014 after a white police officer used an illegal chokehold. Just this summer, Eric Garner’s stepfather Ben Carr, while attending a family wedding in Jamaica, also died of a heart attack.

The Jefferson and Garner family losses highlight a painful reality for Black folks: that death from systemic racism can reverberate through communities and consume entire families. It’s a threat that always looming. It’s a stressor that can outpace life itself.

A 2019 study published in the Proceedings of the National Academies of Sciences showed that even though Black men and boys make up a minority of the American population, 96 out of 100,000 deaths for Black men occur during a police encounter; for white men, it’s 39 per 100,000 deaths. And while Black women and Indigenous people are frequently erased from conversations about state-sanctioned violence, they are also sexually assaulted and killed by law enforcement at terrifying rates.

It goes without saying that families who lose loved ones to police violence are enveloped in grief. But add to that being denied or expecting to be denied justice (less than 1 percent of all officers charged with killing a Black person are actually convicted), and it’s impossible not to be filled with despair. It’s a condition that permeates, spreads, and repeats: so often, being Black means living lives that are harder, and dying deaths that come sooner and more violently, leaving family members with the seemingly impossible task of healing their broken hearts.

“Police brutality can quite literally lead to sickness and death of people close to the victims,” Sirry Alang, a sociology professor at Lehigh University whose research focuses on health in the African American community, told Vox in an email. “We know that the sudden and traumatic death of a family member or friend has profound health and psychological consequences on survivors. These consequences are exacerbated when the sudden death of a beloved one is grounded in the second-class citizenship and racial devaluation of people of color.”

Since we were stolen and torn from our families in Africa, or separated by colonialism, mass incarceration, and anti-immigrant policies, Black people’s right to love each other has been undermined by this country. We’ve been sold and jailed, deported and incarcerated, killed and injured. And most days it feels like it won’t ever stop, like we’re stuck on an endless loop of horror. And while we suffer, the world becomes desensitized to that suffering.

People don’t notice, or perhaps care, when incarceration devastates our families financially, medically, and emotionally. (Black people are 50 people more likely than white people to have a family member incarcerated.) They quickly forget about the mothers who are still fighting for justice after their 12-year-old son was killed by police. They ignore the fact that families are being consumed by illnesses caused by systemic racism, including the abysmally high mortality rate for pregnant Black people — they’re about three times more likely than white people to die giving birth.

The idea of family should be the one thing that connects us all. But the anti-blackness on which this country was founded thrives through its consistent dehumanization of Black people — erasing our emotional pain and the sweeping tide of death running through the Black family.

“When we don’t address police brutality as a structural racism and white supremacy problem, we are sending a clear message that Black people are neither safe in their own homes nor on the streets, and that we are content with this state of affairs,” Alang told Vox. “There is no stronger reminder of state-sanctioned devaluation of Black lives than police brutality and its extensive effects on Black families.”

Of course, this despair following an act of violence is not just limited to immediate families. Our entire communities feel the impact of this race-based stress. Whenever these incidents happen, our world shrinks and we feel even less safe.

The way that technology impacts Black trauma shouldn’t be understated. Diversity and inclusion advocate April Reign told PBS News Hour in 2016, “White people used to have picnics at hangings and at lynchings, bringing their children to watch black bodies suffer and die. We are not far removed from that, it’s just being played out through technology now. And it hurts.”

Whenever I wake up and see that another Black person has been slaughtered by the police, I feel immobilized with fear and rage and sadness. Like Reign says, it hurts. It feels like having my heart broken, over and over again.

There are some days when the certitude of violent Black death feels like the only thing that’s real to me. When I want to hide under the covers because everything else is too terrifying to face.

Whenever anyone in my family — especially a Black masculine person — has a broken taillight or expired tags, I feel like I’m holding my breath, waiting for a call to tell me I’ve lost them. I feel like safety is something permanently out of my reach, and that at any moment, I can lose everything that’s important to me. This is no way to live, and yet countless Black people around the country do. We live with fear and anger and strained hearts.

“My sister died fighting for justice!” Emerald Snipes, sister of Erica Garner and daughter of Eric Garner, said in July. “She died. She’s dead, she’s gone. My father is gone… You won’t kill me.”

Emerald was standing outside a New York City courthouse calling for the firing of the officer that killed her father. A month later — and after five years of administrative hearings, a puzzling Department of Justice investigation, and much silence — Officer Daniel Pantaleo was finally let go.

While some might see Pantaleo’s firing as justice, the former officer won’t face any charges or jail time. He will keep his pension. He may even get his job back. Meanwhile, the years of red tape and indifference have cost the Garner family three lives.

I struggle to understand what justice, or even healing, can look like in a system like this, a system that strips Black people not just of their families and communities but of hope. The only way that we can protect Black families is by dismantling this system. By ensuring that no law enforcement officer is able to take our lives whenever they get “scared” of our skin color. Families must receive swift, restorative justice, so they don’t wear out their hearts fighting, or simply waiting for it to happen.

Nylah Burton is a Denver-based writer. She covers mental health, social justice, and identity. You can follow her on Twitter.

Trump is diverting another $7.2 billion in military funds to build his border wall
Trump thanks the “great people” in a video featuring a supporter yelling “white power”
LaCroix sparkling water CEO accused of “unwanted touching” by 2 male pilots
Meghan and Harry are taking a break from their royal duties. This isn’t surprising.
Could Hillary Clinton really be thinking about another presidential run?
The stakes for health care in Trump’s next SCOTUS pick