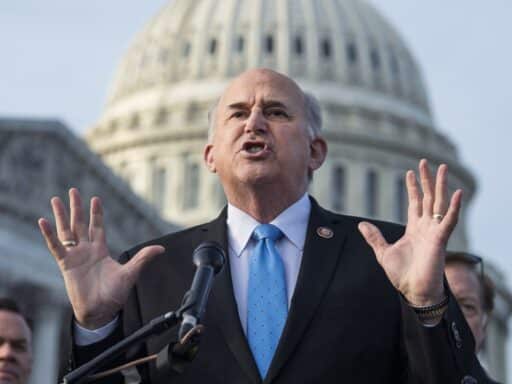 Vice President Mike Pence will not be allowed to pick the next president.

On Friday, a federal court in Texas dismissed the latest in a long line of Republican lawsuits intended to overturn the results of the 2020 presidential election.

The suit, which was brought late last year by Texas Rep. Louie Gohmert and a slate of would-be Republican electors in Arizona, asked the US district court for the eastern district of Texas to grant Vice President Mike Pence the “exclusive authority and sole discretion under the Twelfth Amendment to determine which slates of electors for a State, or neither, may be counted.”

Such authority — which Pence very much lacks — would grant the vice president the power to choose the next president, clearing the way for Pence to throw the election to President Donald Trump and install him to an unelected second term in office.

In reality, Pence does have a role to play when Congress meets to certify the Electoral College’s votes on January 6, but it is more a formality than anything. As vice president, Pence is also president of the Senate — thus, according to the 12th amendment, Pence’s job is to “open all the certificates and the votes shall then be counted.” The actual certification of the votes, though, falls on Congress.

In his case, Gohmert claimed vice presidents were meant to be more than “the glorified envelope-opener in chief,” a position at odds with more than a century of established practice.

The court, however, didn’t consider the merits of that claim in its Friday ruling. In a 13-page order dismissing the suit, Trump-appointed Judge Jeremy Kernodle concluded that the court was “without subject matter jurisdiction” to hear the suit in the first place, arguing that the plaintiffs lacked standing — essentially that they would not be harmed should the certification process proceed — that the suit relied too heavily on convoluted hypotheticals, and that the plaintiffs weren’t even suing the right person.

Specifically, Gohmert sued Mike Pence — the very person to whom his lawsuit would grant sweeping powers if successful.

Pence, understandably, wasn’t exactly on board. In a response from Trump’s own Justice Department requesting that the Texas court deny emergency relief to Gohmert on behalf of Pence — acting Assistant Attorney General Jeffrey Bossert Clark, joined by two deputy assistant attorneys general — wrote that “the Vice President is not the proper defendant to this lawsuit.”

“If plaintiffs’ suit were to succeed,” the Justice Department filing continues, “the result would be to remove any constraint the Electoral Count Act places on the Vice President. To the extent any of these particular plaintiffs have a judicially cognizable claim, it would be against the Senate and the House of Representatives.”

The New York Times’ Maggie Haberman reported Friday that Trump was upset the Justice Department took this stance, and that he complained to Pence about it. The judge, however, agreed that suing Pence was improper.

There were also a few rather important factual errors. Notably, as pointed out by lawyer Akiva Cohen on Twitter, the suit claims that Arizona has appointed competing sets of electors, a situation that would mean the state would submit two sets of votes to Congress. But there are no competing slates of electors, in Arizona or elsewhere. The results of the 2020 presidential election — which was won by President-elect Joe Biden — have been certified in all 50 states and the District of Columbia, and no state legislature attempted to appoint an alternate slate of pro-Trump electors.

Plus they figured “outright lying to a federal court” was a good way to start a complaint.

No, “the State of Arizona” hasn’t “appointed two competing slates of electors” pic.twitter.com/TSWxmHkkb7

As Vox’s Andrew Prokop explained in December, pretend Republican electors in a handful of key swing states won by Biden did meet to cast their votes for Trump, but those votes have absolutely no legal force or substance behind them. Each state has only one valid set of electors — and those electors confirmed Biden’s Electoral College win last month, 306 to 232.

Gohmert, for his part, appears to be in denial: “Judge rules ‘no standing’ in my lawsuit to toss fraudulent Biden electors,” he tweeted Friday. “If I don’t have standing, no one does. When no one ever has standing, what good is a court system?”

And he strayed into even more dangerous territory Saturday in an appearance on the conservative cable network Newsmax, falsely claiming that if Trump is not allowed to steal the election from Biden, “it will mean the end of our republic,” while saying “in effect, the ruling would be that you gotta go the streets and be as violent as antifa and BLM.”

Louie Gohmert on Newsmax: “But if bottom line is, the court is saying, ‘We’re not going to touch this. You have no remedy’ — basically, in effect, the ruling would be that you gotta go the streets and be as violent as Antifa and BLM.” pic.twitter.com/cZIdGTiQls

Gohmert’s case isn’t the first Republican election lawsuit to run into standing issues — the Supreme Court rejected a wide-ranging lawsuit brought by Texas last month for the same reason — but with Inauguration Day rapidly approaching, Trump and his allies are running out of time to launch new attempts to stop Biden from taking office.

Biden’s inauguration doesn’t mean challenges like Gohmert’s, which according to the Washington Post his legal team plans to appeal, will vanish. But that doesn’t mean they stand a chance of succeeding either.

As University of California, Irvine law professor Rick Hasen put it on Twitter last month in regard to a different lawsuit: “People ask me when the litigation is going to stop. I say perhaps not through the entire Biden presidency. But when will the serious litigation stop? It already has.”

Gohmert’s deeply unserious attempt at a lawsuit, however, is just one expression of the post-election mania gripping the Republican Party. And the court’s Friday ruling — which drops Trump and his Republican allies court record to 1-60 in post-election litigation, according to Democratic voting-rights lawyer Marc Elias — won’t be the end of it.

Republicans in both chambers of Congress have already stated their intention to object to the certification of Biden’s Electoral College victory when lawmakers meet on January 6, and Trump, who returned to the White House early on Thursday after a holiday sojourn in Florida, has been busy promoting a rally centered on overturning the election results the same day.

The BIG Protest Rally in Washington, D.C., will take place at 11.00 A.M. on January 6th. Locational details to follow. StopTheSteal!

Needless to say, Trump’s planned rally will be utterly ineffective in challenging the election results — but that doesn’t mean it will be harmless. The last time pro-Trump protesters descended on Washington en masse, violence broke out and at least five people were stabbed.

And though Republicans efforts on the Hill are equally doomed to fail, they will ensure a protracted certification process come Tuesday. With support from at least one Republican senator guaranteed — Sen. Josh Hawley of Missouri got behind the effort on Wednesday — the GOP can temporarily hold up the process by objecting to a state’s electoral results.

According to Vox’s Andrew Prokop:

Under this process, if at least one House member and one senator object to the results in any state, each chamber will hold a vote on the matter. For the objection to succeed, both the House and the Senate must vote in favor of it. Otherwise, it fails. (And since Democrats will control the new House, any objection to Biden’s win will surely fail in that chamber.

Failure seems a near certainty in the Senate as well. Democrats currently hold 48 seats in that chamber, and a number of Republican lawmakers have expressed disdain for Hawley’s plan. According to Politico, Alaska’s Sen. Lisa Murkowski has called it “awful;” Utah Sen. Mitt Romney said it was “disappointing and destructive;” Sen. Roger Wicker of Mississippi said, “I don’t think it’s a good idea;” and Nebraska’s Sen. Ben Sasse said, “Adults don’t point a loaded gun at the heart of legitimate self-government.”

New York Magazine’s Olivia Nuzzi reported Friday that a GOP official said senators have been so openly angry with Hawley “because they think he knows better. As the official put it: ‘He’s not some moron like Louie Gohmert.’”

That isn’t to say Hawley won’t get some support: According to a CBS report on Saturday, as many as a dozen Republican senators, including three new members, might join Hawley in objecting.

CBS News reports: Roughly a dozen Republican senators are in talks to join Missouri Senator Josh Hawley in objecting to the electoral college results when congress meets Wednesday, according to multiple Republican sources familiar with the ongoing talks.

Overall, though, according to Senate Majority Whip John Thune, the effort will “go down like a shot dog” in the Senate.

Senate Majority Leader Mitch McConnell also opposes the effort — but according to Gohmert, as many as 140 Republican representatives plan to object to the vote totals in the House.

As Prokop points out, none of this will work out for the GOP. Regardless of what further undemocratic hijinks may be planned, Biden won the presidency, and his win will be confirmed again on January 6.

But the efforts of Gohmert, Hawley, and other Trump allies does, however, underscore a continued and dangerous unwillingness on the part of a major US political party to accept the results of a free and fair election — and the corrosive effect democracy that might have is cause for concern regardless of how successful their efforts are.