Louisiana may get hit by a hurricane this weekend. New Orleans is already flooded. 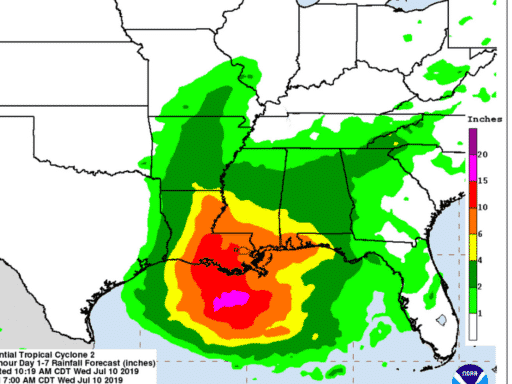 A potential hurricane Barry is heading toward the central Gulf Coast. Here’s what we know.

A storm is brewing in the Gulf of Mexico, and the National Hurricane Center expects it to become a hurricane by Friday or Saturday, with potentially dangerous impacts along the coasts of Mississippi, Texas, Louisiana, and the city of New Orleans.

The storm could bring as much as 20 inches of rain to the region, which isn’t good, considering that the region is already inundated with rain. The city of New Orleans flooded this week from heavy storms, with many streets covered with a dangerous amount of water. The Mississippi River is expected to rise to 19 or 20 feet by the weekend, which is near the height of the city’s levees.

If the river overtops the city’s levees, it would be the first time in more than a half-century. What to know: https://t.co/2xu7OAWI08 pic.twitter.com/YgAVmUuQDZ

On Thursday, the storm in the Gulf intensified into tropical storm, named Barry. By Saturday, it may have maximum winds at 75 miles per hour, making it a category 1 storm on the Saffir-Simpson wind scale.

The wind speed is just one of the dangerous components of the storm. (In general, coastal flooding tends to be the deadliest aspect of a hurricane.)

In this hurricane, storm surge — the seawater pushed onshore by the hurricane’s winds — may top 3 to 6 feet, flooding low-lying areas (of which Louisiana has plenty). On Thursday, the National Hurricane Center issued a Storm Surge Warming, which “means there is a danger of life-threatening inundation from rising water moving inland from the coastline in the indicated locations during the next 36 hours.”

There is a danger of life-threatening storm surge inundation along the coast of southern and southeastern Louisiana, where a Storm Surge Warning is now in effect https://t.co/TlYhzb6zDw #Barry @NHC_Surge pic.twitter.com/wpYiY66mcd

This storm is also expected to generate a lot of rain — more than a foot of it in some areas — which can contribute to inland flooding along the banks of rivers.

It’s still early and forecasts can change. But here’s the forecast as of Thursday morning from the National Hurricane Center.

And here’s the forecast for rainfall.

Finally, here are the key messages the National Weather Service wants the public to know:

1. Barry is expected to bring storm surge, rainfall, and wind hazards to the central Gulf Coast during the next several days.

2. There is a danger of life-threatening storm surge inundation along the coast of southern and southeastern Louisiana where a Storm Surge Warning has been issued. The highest storm surge inundation is expected between the Mouth of the Atchafalaya River and Shell Beach. Residents in these areas should listen to any advice given by local officials.

3. A Tropical Storm Warning and Hurricane Watch are in effect for much of the Louisiana coast and additional watches and warnings could be required later today. Residents in these areas should ensure they have their hurricane plan in place.

4. The slow movement of this system will result in a long duration of heavy rainfall threat along the central Gulf Coast and inland through the Mississippi Valley through the weekend and potentially into early next week. Flash flooding and inland flooding will become increasingly likely, some of which may be significant, especially along and east of the track of the system.

How to actually make a difference if you’re nervous about the election
4 winners and 4 losers from Biden’s climate leader summit
The $35 million play to fix Democrats’ data problem is shutting down
The best 80 cents I ever spent: A pen I use to write to my friends
The new Democratic House just approved two bills to reopen the government
What we know about Joe Biden’s possible vice presidential picks