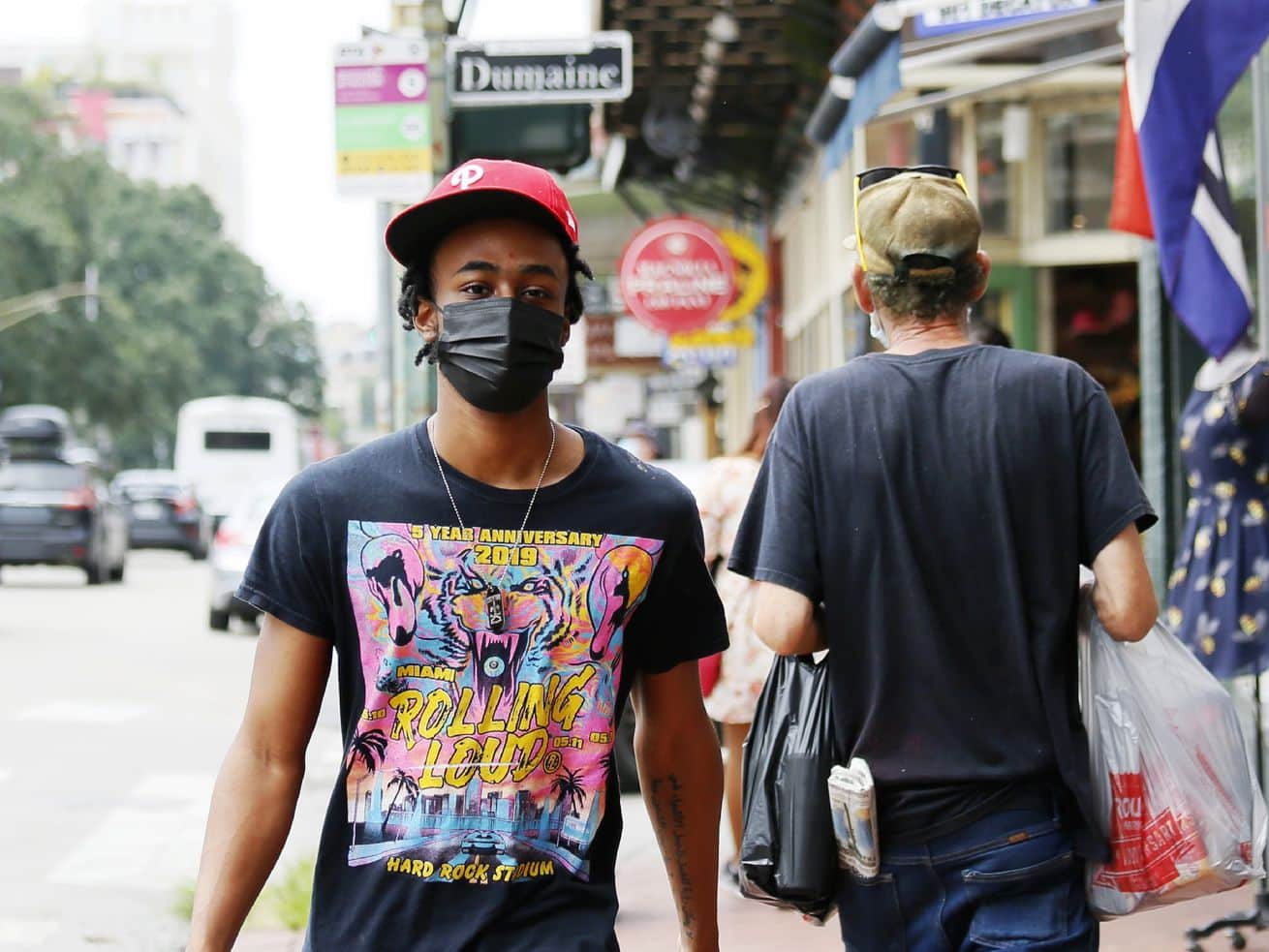 All eyes are on Louisiana, which leads the country in new Covid-19 cases.

Normalcy appears to be out of the country’s grasp with the recent uptick in Covid-19 cases fueled by the Delta variant, a highly contagious strain of Covid-19. According to the Centers for Disease Control and Prevention (CDC), the Delta variant caused 80 to 87 percent of all US Covid-19 cases in the last two weeks of July. This has impacted states with low vaccination numbers the most.

Louisiana, where just 37.3 percent of residents are fully vaccinated, is the fifth-least vaccinated state but is currently leading the country in an eruption of new cases after infection rates began to climb in early July.

Daily records continue to go up and the state reported over 6,000 new cases on Friday. According to a recent update from Baton Rouge General Hospital obtained by WAFB’s Steve Caparotta, 47 percent of the patients infected with Covid-19 in the hospital’s care are in the ICU and only 15 of these patients had been vaccinated. The hospital stated that workers this weekend are “in the middle of their toughest fight against this virus.”

Louisiana Gov. John Bel Edwards on Monday reinstated the indoor masking mandate in response to the worsening crisis. “It has become extremely clear that our current recommendations on their own are not strong enough to deal with Louisiana’s fourth surge of Covid,” Edwards told reporters after announcing the mandate.

During a Friday press conference, Edwards made a grim assessment: “Things are if anything, worse today than they were on Monday. Unfortunately, the eyes of the nation are on Louisiana right now.”

Though less than a week old, the mask mandate has already faced backlash, notably at a school board meeting in St. Tammany parish on Thursday. One parent falsely claimed their child would be hindered from learning due to masks cutting off oxygen to the brain. The conspiracy theory was debunked last year by Reuters and other outlets.

With the school year rapidly approaching, the safety of children in Louisiana is a major concern. There is no approved vaccine for children under age 12, and only 15 percent of people ages 12 to 17 are vaccinated in Louisiana, which leaves young people vulnerable. According to Dr. Trey Dunbar, the President of Our Lady of the Lake Children’s Hospital in Baton Rouge, more than 50 percent of the children infected with Covid-19 are under intensive care.

Before the state-wide mask mandate was put in place, the Louisiana Board of Elementary and Secondary Education had chosen to leave masking decisions up to individual schools and only the school district of New Orleans required indoor mask-wearing. The state-wide mandate means that more children will be safe, but it is up to schools to enforce it.

Apart from the mask mandate, schools have the freedom to construct their own set of rules and safety precautions which leads to a disparity in the way Covid-19 is managed in the education sector. According to the guidebook for the Jefferson Parish school districts, schools are largely enforcing in-person K-12 learning except for high school students who want to benefit from the flexibility and extra time that virtual school allows.

This is great for high school students who want to stay home but, from a safety perspective, the decision is confusing. While high school students are eligible to get vaccinated and would therefore be safer in an in-person classroom setting, children in grade school are still vulnerable. The guidebook also states: “Schools should plan for and expect that some students/staff will contract COVID-19 during the school year given the levels of COVID-19 in our communities.” This is concerning from a public health perspective, as preventative measures, such as more access to virtual learning, could reduce the risk of exposure that the board insinuates is all but inevitable with in-class teaching.

Making masks mandatory again is a productive step, but because the Delta variant is highly transmittable, it is not enough. Increasing the number of vaccinated people in the state is the best way forward, but in a state where conspiracy theory holds more value than public health policy for some, this is easier said than done. Misinformation about what is in the vaccine has caused some people to refuse the jab. In Shreveport, a recent City Council meeting grew heated when a woman began protesting against the vaccine, claiming that unvaccinated Americans would be unfairly monitored and that vaccinated people could be used in experiments.

These are both false claims but the damage of this type of rhetoric may contribute to low vaccination rates. According to a study by Donelson Forsyth, a professor at the University of Richmond, resistance to vaccination and mask mandates is concentrated in certain geographical areas because of something called “groupthink.” Decisions made by a group and followed en masse prevent individuals from logically analyzing information and considering other alternatives, which may explain why certain states have remained Covid-19 hotspots.

It’s important to look at the bigger picture of Louisiana’s wave of Covid-19 cases as well. Researchers at Georgetown University identified the largest clusters of unvaccinated people in the United States and found that most of these areas were experiencing rising cases and examples of the virus mutating, which poses a risk to the greater population. Near the top of this list: Shreveport, Louisiana. “Those vulnerable clusters put all of the United States — and to some extent, the world — at risk for going back to 2020, since high-transmission areas can become breeding grounds for Covid-19 variants that could go on to evade Covid-19 vaccines,” wrote CNN’s Elizabeth Cohen and John Bonifield.

While parts of Louisiana pose a risk to the rest of the country, people in-state are also at risk from tourists arriving for vacations. There are currently no travel restrictions in Louisiana and Americans from all over the country’s various Covid-19 hotspots are able to enter the state at will. This is especially concerning because of Louisiana’s proximity to states like Texas and Mississippi. Amarillo, Texas has one of the largest unvaccinated clusters in the country while Mississippi’s partial vaccination rate is 38.64 percent, the lowest in the country.

Another new concern, while not as currently widespread, is the Lambda variant that has recently infected people in Louisiana. The first cases of the Lambda variant were detected in Houston, so health care officials believe that the virus variant spread across the Texas-Louisiana border.

Despite the fact that the CDC warned against nonessential travel for people who are not fully vaccinated, and despite the ever-multiplying virus variants, tourism in Louisiana is in full swing. The tourism industry typically provides more than 230,000 jobs for Louisianians and produces over $1 billion in state tax revenue. Before the surge in cases due to the Delta variant, the tourism industry had been approaching pre-pandemic proportions, something that Lt. Gov. Billy Nungesser does not want to let go of. “We’ll be back to those regular [tourism] rates sooner than we thought if we can get through this last surge without a major hit to the tourism industry,” Nungesser told the Louisiana Radio Network at the end of July.

Congressman-elect Luke Letlow, who held numerous maskless campaign events ahead of his election, ultimately died from complications with Covid-19 weeks before taking office in December of last year. He was the first congressman to die from the virus. His widow, Julie Letlow was elected to her husband’s seat in a special election in March; she gave an interview with CBS News this week urging her constituents to get vaccinated.

“My prayer is that not one more person has to lose their life to this virus. It is a horrific way to leave this world.” Letlow said. “We have the answer, let’s use it.”

Public health officials would agree with Julie Letlow. The most effective way to get through this surge is to increase vaccination rates. There has been an effort to encourage people to do this. In fact, the federal government has allocated $2.3 million in lottery money as an incentive. Louisianians have already started winning payouts, while the grand prize of $1 million is yet to be awarded.

This effort has paid off, as Louisiana has seen an uptick of three percent in vaccination rates since June. But as major cities in the state prepare for the plethora of upcoming fall festivals — including JazzFest in New Orleans and Festivals Acadiens in Lafayette — amid rising Covid-19 cases, there is a looming sense of deja vu. As the pandemic began to spread in the US in March 2020, Mardi Gras was in full swing and the high concentration of people without enforced safety precautions led to a death rate that was at one point the highest in the world. Like the rest of the country, Louisiana is trying to balance public health guidance with a desire for normal life, so the outcome of its current surge in cases is still unclear.