Louisville reaches a $12 million settlement with family of Breonna Taylor 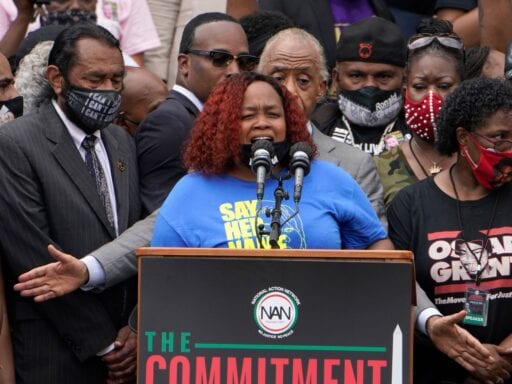 Share
Loading...
Tamika Palmer, mother of Breonna Taylor, speaks at the Lincoln Memorial during the March on Washington protest on August 28, 2020, in Washington, DC. | Jacquelyn Martin/AFP via Getty Images

In addition to the substantial payout, the agreement also includes policing reforms.

The city of Louisville, Kentucky has agreed to a $12 million financial settlement with the family of Breonna Taylor, the 26-year-old EMT who police shot to death in her apartment during a late-night raid in March, according to the New York Times. The details of the settlement are expected to be announced on Tuesday afternoon at a press conference with Mayor Greg Fischer and attorneys for the Taylor family.

The deal is reportedly the biggest payout made by police in the city’s history, the Washington Post reports. In 2012, Louisville paid out $8.5 million to Edwin Chandler, who was wrongfully imprisoned for almost a decade after a law enforcement official committed perjury, according to the Courier Journal.

The settlement with Taylor’s family, which comes after weeks of private talks and negotiations, also includes policing reforms such as a “requirement that commanders approve all search warrants before they go to a judge,” a source told the Courier Journal. The settlement also reportedly states that officers who choose to live within city lines will receive housing credits, and officers involved in any shooting would be drug- and alcohol-tested.

Sam Aguiar, an attorney for Taylor’s family, said the city’s handling of the case has been “slow and frustrating” but hopes the settlement can be “a turning point” for substantial police reform. In the 186 days since Taylor’s death, activists have led demonstrations around the country to demand that the police be held accountable and that the city council defund the police. While the police budget adopted in late June didn’t begin to reduce the department’s funding, the Louisville Metro Council voted unanimously to ban no-knock warrants.

On the night of her death, police relied on a no-knock warrant to enter Taylor’s apartment — police say they announced themselves, but Taylor’s boyfriend Kenneth Walker, who was inside the apartment at the time, disputes that claim. In search of two people suspected of selling drugs, neither of whom was Taylor, police used a battering ram to enter the space. They fired 20 rounds, hitting Taylor eight times.

Kentucky Attorney General Daniel Cameron, the special prosecutor in the case, is quietly conducting an investigation into the fatal shooting to determine whether the three officers involved should face criminal charges. A grand jury may hear the details of the case as soon as this week, according to multiple reports.

Taylor’s mother, Tamika L. Palmer, has urged the attorney general to charge all three officers — Brett Hankison, John Mattingly, and Myles Cosgrove. During the course of the investigation, the Louisville Metro Police Department terminated Hankison because he “displayed an extreme indifference to the value of human life” when he “wantonly and blindly” fired 10 rounds into Taylor’s apartment, according to his termination letter. He has since appealed the termination. Mattingly and Cosgrove were placed on administrative reassignment.

Border arrests dropped in August. That doesn’t mean the crisis is over.
Trump repeatedly pushed incoherent talking points about the wall over the course of a single day
The US needs real-time data to fight the pandemic. We’re still not even close.
The Senate just rejected witnesses in Trump’s impeachment trial — and barrels forward to acquittal
The 3 best songs on Taylor Swift’s new album, Lover
Vox Sentences: State of Disunion