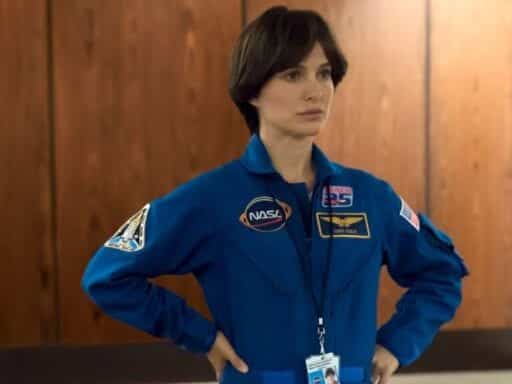 The film wastes Natalie Portman in the process.

Going to space messes with your head. That’s what movies tell us: Sunshine, The Martian, Gravity, 2001: A Space Odyssey, and, as of a few weeks ago, Ad Astra. Something about floating up there in the vast emptiness above the planet apparently redefines your sense of proportion, of what truly matters in life, of your own importance in the world. No wonder NASA was worried for a long time about something called “space madness.”

Lucy in the Sky is trying to be a movie about the disorienting effect of having been in space, and thus to provide some kind of insight into what happened in the very specific case of Lisa Nowak, the astronaut who in 2007 became infamous after she drove 900 miles from Houston to Orlando to attack a romantic rival. The police found a steel mallet, a knife with a four-inch blade, a BB gun, and a map to the rival’s house in her possession.

The movie is “inspired” by these events, rather than sticking to the facts; probably most notably, the film’s protagonist never wears a diaper for her long-haul drive, as Nowak did. But it is at least a good-faith attempt to understand why someone who was physically, emotionally, and mentally fit enough to be an astronaut would run so completely off the rails.

If only the filmmaking was up to the task. Directed by Noah Hawley, who created shows like Fargo and Legion, Lucy in the Sky feels unfocused, distracted, and tonally uncertain. Natalie Portman, in a Dorothy Hamill wig and a Texas accent, stars as a Nowak stand-in named Lucy Cola. But whatever she’s doing is drowning in showy filmmaking that detracts from her performance rather than bolsters it.

When we meet Lucy, she has just returned from 10 days in space, an experience she can barely describe but keeps floating back to in her mind’s eye. Down on Earth, she has a genial husband (a mustachioed Dan Stevens) who works in public relations at NASA, and a comfortable home in Houston. But she’s curiously disconnected from her earthbound life, and can’t stop fantasizing about going back into space.

That sense of longing turns out to also be affecting a few of her colleagues, including hunky astronaut Mark Goodwin (Jon Hamm), with whom she strikes up a desperate and sad affair. Lucy and Mark, as well as a handful of other astronauts (two of whom are played by Tig Notaro and Zazie Beetz), are hoping to be selected for the next mission. But the sadder Lucy gets, the more unglued she becomes.

If it doesn’t sound like this movie has much of a plot, that’s because it doesn’t. Hawley’s pacing is always slow, which can work (and even be welcome) on a TV show with time to burn, but quickly becomes exasperating in a feature film. For most of Lucy in the Sky, every scene feels like a slight variation on the same cycle: Lucy is sad, but says she’s fine. Lucy wishes she was in space. Lucy does something she’ll later regret.

Portman, as Lucy, is doing a lot with very little. Her Texas drawl is suitably drawly, but more importantly, you genuinely get the sense that she’s detached from everything: from her work, her home life, her husband, even from Mark. She’s somehow lost the ability to emotionally connect with anything at all.

What’s less clear is why she feels this way, other than “space.” It seems almost inconceivable that she could have changed so drastically in 10 days, even during an experience that few humans will ever have. But Lucy in the Sky refuses to give us much of a glimpse into pre-space Lucy that could illuminate that question one way or another. We have no more of an idea of who she is than she does.

The film is almost singularly obsessed with bringing us into Lucy’s headspace, her battle between emotion, reason, and fantasy. It makes use of expressionist techniques galore — cut-together sequences in which it’s hard to know what we’re looking at, other than lights and colors; flashbacks to floating over the Earth — but the most irritating is a constant rejiggering of the film’s aspect ratio. When Lucy is feeling constrained by her earthbound life, the film turns nearly square; when she is losing herself to fantasy, it broadens out to widescreen. This happens a lot. You can almost feel the movie shaking you by the shoulders and yelling, She feels boxed in. Get it? Get it?

We get it. Near the end, Lucy in the Sky finally starts moving forward, and there’s a hint of the movie it could have been, something more akin to Fatal Attraction but from a paranoid woman’s perspective: Lucy on the Verge of a Nervous Breakdown. When Lucy gets in her car and starts driving to where she knows she can confront Mark, it should feel like a long-rumbling volcano has finally erupted. Instead, the movie shifts abruptly from sad-lady mode into obsessed-lady mode (Portman dons a blonde wig!) — and then does the unforgivable Hollywood thing of tacking on some pseudo-feminist pablum via a supposedly empowering speech Lucy delivers out of nowhere.

It’s mostly squandered potential, which is sad. There are a lot of interesting pieces that Lucy in the Sky could have unpacked, a lot of questions it might have broached. The way desire and fantasy intertwine with the highly regimented life of an elite astronaut; the stuffing-down of emotion that science requires; the truly brain-bending experience of venturing where humans weren’t built to venture — exploring any of these topics would have made for a much more interesting movie. But Lucy in the Sky, distracted by its own flashy filmmaking, can’t center its gaze on one goal long enough to convey any of its interests well.

Lucy in the Sky opens in theaters on October 4.

Covid-19 cases are rising, but deaths are falling. What’s going on?
The next challenge for plant-based meat: winning the price war against animal meat
When and where fall foliage colors will peak, in one map
Sharp Objects shows its teeth in a killer season finale
It’s actually very reasonable for Florida to open its beaches
How to keep the smart speaker you got for the holidays and still keep some of your privacy, too