Mail has never been more important. Here’s what it’s like to be a postal worker now. 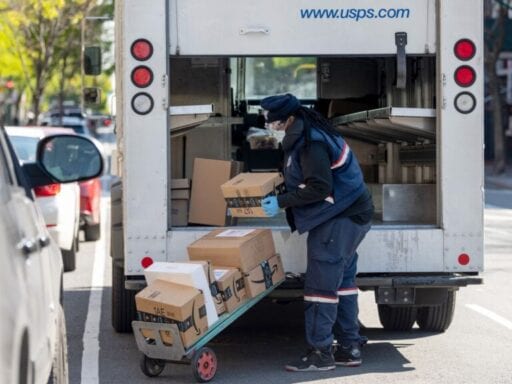 A USPS employee shares what it’s like delivering mail in the middle of a pandemic.

In some ways, Harry says, delivering the mail has never been easier. The streets are empty, and traffic is at an all-time low. It’s hard to navigate a clunky mail truck around New York’s chaotic surface streets, but now, Harry never has to worry about rush hour or pedestrians or double-parking on Bedford Avenue. It’d be perfect, if it wasn’t for the lingering knowledge of why everyone is inside.

Harry, who asked that Vox withhold his name for privacy reasons, is one of the workers on the front lines of the coronavirus. Courier services — including the US Postal Service — are essential to keeping society afloat during the unprecedented stay-at-home orders we’re all living through, and Harry tells me he’s been loading up his truck with enough packages to make it feel like Christmas in May. While many stores are closed, Americans no longer want to risk a trip to the few that are open, so everyday items like toothpaste and toilet paper are being ordered through the post more than ever before. If the quarantine persists through the summer, Harry might be asked to process mail-in electoral ballots. The USPS will bear the brunt of American democracy for the first time in US history.

It’s a double-edged sword. Harry obviously doesn’t want to expose himself to the virus, but he’s also started to take added pride in his job. Stimulus checks just started going out in the mail, and civilians need to receive them.

Harry is also well aware of the pressures this economic downturn has had on the USPS as an institution. It was already struggling financially before the pandemic, and if the slowdown continues, officials warn that the post office will effectively “run out of cash” in September, putting 630,000 jobs at risk. Republican lawmakers have long resisted bailing out the USPS due to an ideological preference for a privatized mail-delivery system, as well as President Donald Trump’s unyielding vitriol toward Jeff Bezos and the favorable rates it offers Amazon.

If the USPS were to collapse, it would be devastating for large swathes of rural America: 14.5 million people in rural areas don’t have broadband internet access, 18 percent of Americans still pay their bills by mail, and more than half the people who get their medicine delivered are over the age of 65. Harry has a hard time imagining the Trump administration liquidating the postal service, but in his words, “Never say never.” Our conversation, lightly edited for length and clarity, follows.

When did the coronavirus start to impact your job?

I work in New York City, so once the mayor and governor started talking about shelter in place, that’s when it started getting weird for us. Once they shut down the schools, they had to provide leave for workers who needed to take care of their kids at home. A lot of our employees don’t have a babysitter at home. They relied on the school system to watch their kids. So as far as staffing goes, we’ve lost about 50 percent of our workforce at that point. It got really weird. Normal eight-hour days turned into, like, 14-hour days.

Just because of the understaffing?

Yeah, just staffing. The operations still need to happen, but we just don’t have the staffing to get it done.

Oh yeah, a 12-hour shift is normal. Twelve hours a day, six days a week — but we’re getting paid overtime.

It seems to me that some people in the USPS are frustrated by these crazy shifts, and others are enjoying the extra money. Where do you fall on that scale?

It’s good money. It could be worse. There are people who have lost their jobs and are facing unemployment. It’s been tiring, but I’m thankful for what I have.

Have you noticed a difference in the physical act of delivering packages since the coronavirus has picked up?

I used to hand over a package to a customer, no problem. Now more and more of them are saying, “It’s okay, just leave it outside.” That’s for me, too. I’d rather not interact with them, because you never know.

Have people been more grateful for you when you’re out on your routes lately?

People do say thank you. They’re appreciative. Someone gave me a handmade card [thanking me for my service.] It was a rough couple of weeks, and when I got that, it was really touching. It’s the little things. It was a little pick-me-up.

Is there anything about this moment, being deemed an essential worker, that has given you a greater sense of duty?

I think so. More so now than before. People are relying on us for medicine. … The stimulus checks are going out. There’s more of a sense of urgency now than there was on a normal spring afternoon.

Are there fewer cars on the street?

“There’s a lot fewer cars on the road. It’s bittersweet, because you know why people are home.”

Yeah, there’s a lot less traffic and a lot fewer cars on the road. It’s bittersweet, because you know why people are home. It’s great for driving, but it sucks that they’re stuck at home.

Has the amount of packages you’re delivering changed at all?

Volume has gone up. People are ordering essentials from Amazon and Target or whatever. It feels like Christmas, it really does. Normally springtime is our lighter season. But now it feels like it’s November and December in terms of volume.

The post office is in the news right now, as the Trump administration has refused to commit to a bailout for the USPS. What has been the buzz around your peers? Is there any fear that the infrastructure could collapse?

Currently, our main financial goal comes with the 2006 Postal Accountability and Enhancement Act, [which mandated the agency to pre-fund pensions for workers.] There’s talk about relieving that in some ways, but in terms of sentiment, I’m not sure. I’ll believe it when I see it. You know what I mean? It’s one of those things that sounds nice.

Are you surprised at all that there has been an ambivalence toward the postal service from the Trump administration during this time of crisis?

No, this has been going on for a while. It does feel like the GOP doesn’t care as much. But there are people on the other side of the aisle that do fight for us.

The idea that the postal service would collapse is almost unthinkable, but can you imagine that? Are you at all worried?

Things could be worse. It doesn’t feel viable right now. People rely on us to get their medicine and their packages. It doesn’t seem like something that would happen tomorrow. But again, never say never.

How Trump made it that much harder to become a US citizen
Congress finally passes $19 billion in disaster aid
The Badass Bitches museum tour — for those who like their art with feminism and swearing
Obamacare looks surprisingly sturdy after the individual mandate’s repeal
Baby Yoda: The Mandalorian’s adorable alien costar, explained
Why Hamilton is as frustrating as it is brilliant — and impossible to pin down