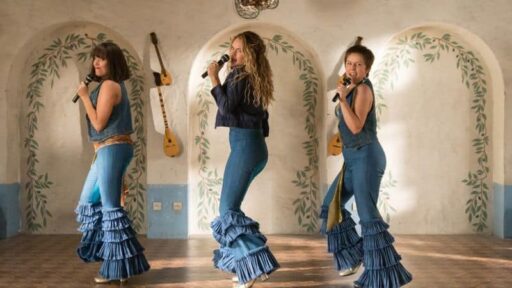 All ABBA songs kind of start in medias res. Sometimes it feels like the song itself starts in the middle — listen to the opening of “Dancing Queen” or “Waterloo,” which feel like they just plunged into the song midway through and took off running. But more often, it’s the lyrics themselves.

ABBA’s often relentlessly upbeat, earworm-y melodies contain songs that suggest something quite horrible has happened off-screen before the song starts — breakups, betrayals, or just generally unhealthy attitudes toward romance and attachment. Barry Walters summed up their catalog well in 2015, when he wrote that “they whispered private anguish in the midst of the party.”

The first Mamma Mia! film, released in 2008 and based on the Broadway show of the same name, followed suit. The story jumped right in, filling in just enough backstory to lend credence to its barely plausible plot and let us proceed full steam ahead with the singing and dancing in the sunshine.

Mamma Mia! Here We Go Again is kind of a sequel and a prequel to that film (and you’ll probably enjoy it more if you see the first film, too). It tells the story of what brought Meryl Streep’s Donna to the island in the first place, and how she met each of the three men whom her daughter would someday call her “dads.” At the same time, we see what’s happened five years after the events of Mamma Mia!

All that happens with the most necessary elements: lots of movie stars, a beautiful Greek island, and, of course, the timeless tunes of the Swedish pop group who inspired the whole thing. The result is sublimely ridiculous, or perhaps ridiculously sublime: the very definition of frothy summer entertainment, moderately (if unevenly) well-directed by Ol Parker, that works best if you just suspend your need for it all to make sense.

Mamma Mia! Here We Go Again tells what came before, and what comes after, the first film

First things first. This is not a spoiler so much as the setup for the entire film, but …

… yes, as the trailers for Here We Go Again hinted, in the five years or so since the events of Mamma Mia!, Donna (Meryl Streep) has passed away. Sophie (Amanda Seyfried) has renovated the inn and named it La Bella Donna in her honor, and, with the help of her hotel manager Fernando (Andy Garcia), is preparing a big party for the reopening, with wealthy guests en route.

Sam (Pierce Brosnan) has stayed on after Donna’s death, working from the carriage house. Sky (Dominic Cooper) is off in New York for a six-week hotel management course, though he’s been offered a job there and is thinking about taking it. As Sophie prepares for the festivities — and the arrival of her mom’s former bandmates Tanya (Christine Baranski) and Rosie (Julie Walters) — she reflects on her mother’s past, and the film floats back to 1979.

And that’s where things start to get wild, from a movie standpoint. In 1979, Donna, Tanya, and Rosie were graduating from New College at Oxford, with their whole futures in front of them. The path for Donna from Oxford to a little island in Greece is not littered with many obstacles other than travel troubles, but it’s definitely littered with handsome young men — first Harry in Paris, then Bill on a boat in Greece, and finally Sam on the island.

All of these characters are played by younger actors in the prequel segments. As young Donna, Lily James is resplendent: a riot of blond wavy hair, a huge smile, and a gorgeous voice. She’s also doing a Meryl Streep impression that, if not subtle, is still effective (and frankly, subtlety would be out of place among the spangles and Swede-pop covers).

Of course that’s all a little silly; there’s almost no way these three women would have the same mannerisms and (especially) haircuts 25 years later.

But let us never forget that Mamma Mia! Here We Go Again is the sequel to a movie based on a Broadway musical, which in turn is based on a very theatrical band. Some goofy, corny farce is part of the theatricality and the fun. Who wants a somber realistic drama based on the songs of ABBA?

So when Hugh Skinner, who plays young Harry and thus a young Colin Firth, imitating Firth’s mannerisms, launches into a full-scale production of “Waterloo” in a French restaurant to woo Donna, it’s stagey, yes, but it’s awfully fun. Same with Josh Dylan as young Bill/Stellan Skarsgård, and Jeremy Irvine as young Sam/Pierce Brosnan (though he sings better than Brosnan).

There are big dance numbers and seductive little ones, and on the whole this film is a lot like the first, with some big winks at the audience and some shiny spandex to keep it all sparkly.

Mamma Mia! Here We Go Again is laced with more sadness than its predecessor

But there are a couple of songs rendered as sad ballads, too. The fun waxes and wanes a bit more than in the first Mamma Mia!, which is probably fair for a film whose premise is built on the death of its central figure.

The inherent pathos of the passage of time is the theme of Here We Go Again: the time since they all were young, and the time since the last film, too, when Donna was still with them, and when Sky and Sophie’s marriage was fresh and new, and when — as a running joke from a ferry operator underlines — everyone looked a little, well, better than they do now.

Even the Greek economic crisis gets a glancing nod, indicating not all paradises are purely paradisical. (Side note: If you do the math, this film is set roughly in 2005, which is technically before the beginning of the Greek economic crisis, and yes there are iPhones, which didn’t launch till 2007 — but then, it’s a musical based on songs from a band from the 1970s so it’s best not to get too hung up on the details.)

And time inevitably brings loss, though it brings new birth and new relationships, too. It also brings surprises. (Yes: Cher is in this movie, and yes, she sings.) Here We Go Again feels a tad more mature than Mamma Mia!, which ended in a double wedding and the hint of more romances to come. Now, five years on, relationships have changed, shifted, and matured.

By telling the story on two timelines, Donna’s and Sophie’s, we can easily see all the ways that history repeats itself, filtered through all kinds of love — between friends, between romantic partners, and between mothers and their daughters.

So sure, Mamma Mia! Here We Go Again is still at heart a kooky, poppy, lighthearted romp in the Grecian sun. It’s not a great movie, or even a particularly great musical, but at least it delivers on its promises.

But if you find yourself sniffling unexpectedly, then you’re probably just feeling your own mortality in the middle of the free-flowing wine and dancing. Which, in the end, is probably exactly what ABBA would want.

These women survived abuse and assault. Now they’re behind bars. Should they be?
Sebring, Florida, bank shooting: what we know
This surgeon wants to offer cheap MRIs. A state law is getting in his way.
Women suffer needless pain because almost everything is designed for men
Is abuse of power an impeachable offense?
Brexit is here. But what happens next?