Manafort trial: Both sides tried to use Rick Gates’s “flipping” to their advantage 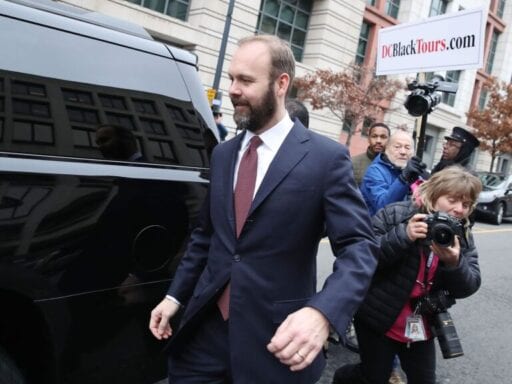 The prosecution’s star witness finally wrapped up his testimony.

Rick Gates, the prosecution’s star witness in the government’s case against Paul Manafort, faced days of questioning on the witness stand. Robert Mueller’s attorneys got Gates to testify that he, along with Manafort, knowingly committed crimes. Manafort’s defense, meanwhile, battered Gates with questions, trying to rip apart his credibility.

It’s ultimately up to the jury to decide who to believe, but the back-and-forth over Gates hints at the big upside, and downside, of cooperating witnesses — a witness or potential defendant in a case who “flips” and makes a plea deal with prosecutors. In exchange for working with prosecutors, they often get a lighter sentence.

Cooperating witnesses is a big issue in special counsel Mueller’s investigation. There was speculation that Mueller’s case against Manafort for financial crimes was an attempt to pressure him to flip on the Trump campaign and spill about efforts to collude with Russia. Mueller, in addition to Gates, has flipped two other ex-Trump aides — former National Security Adviser Michael Flynn and former campaign aide George Papadopoulos.

Gates may be the prosecution’s star witness, but the case doesn’t just rest on him. Prosecutors have presented a slew of additional evidence to detail Manafort’s transgressions, including testimony from other witnesses to show that Manafort was attempting to hide his foreign accounts and avoid paying taxes in the US.

Prosecutors spent last week calling accountants who testified that Manafort paid for his lavish lifestyle through transfers from overseas accounts, reports NPR. After Gates testified, prosecutors called an FBI forensic accountant who spoke on how the FBI connected foreign accounts with Manafort, including by noting the fact that his name or passport was listed on some of them. The accountant also testified about invoices that show Manafort’s overseas money being used for expensive purchases, reports the Washington Post. She is reportedly one of 20 more witnesses the prosecution plans to call.

But Gates, who admitted that he committed these crimes alongside Manafort, gives the prosecution the insider’s account — the person who can attest to how and why they broke the law. As former federal prosecutor Daniel Braun explained to Vox last week, prosecutors will often make the case to the jury that if they want to understand how a criminal enterprise or scheme worked, they have to hear the account on someone who participated in it.

“The most important factor in making that decision tends to be the strength of the corroborating evidence that you can offer alongside that witness’s testimony,” Braun said. “It’s hard to imagine a situation in which a prosecutor would present the uncorroborated testimony of a cooperating witness and expect that to be accepted as proof beyond a reasonable doubt by a unanimous jury.”

Cooperating witnesses often have a credibility problem. Gates is no different.

Manafort’s defense is dependent on proving Gates is unreliable and untruthful. As Vox’s Andrew Prokop explained during Gates’s first day of cross-examination: “Defense attorney Kevin Downing got Gates to admit on the stand to all sorts of shady behavior: lying to Mueller’s investigators before his plea deal, having an extramarital affair, embezzling money from Manafort, and trying to get Donald Trump’s inaugural committee to foot the bill for his personal expenses.”

This is a well-tread strategy for defense teams, so it’s no surprise Manafort’s team is relying on this playbook. Cooperating witnesses — particularly those, such as Gates, who had a lot of criminal exposure and emerged with a deal — always come with this baggage. Gates, in the defense’s estimation, is not just a liar himself — cheating, embezzling money from Manafort — but he also turned on his former business associate when he had a chance to save himself. Or as defense attorney Thomas Zehnle said during opening arguments: “Mr. Manafort placed his trust in the wrong person.”

But this attack is why prosecutors are calling many witnesses, and have submitted reams of evidence. That doesn’t mean the arguments don’t have weight. As Braun noted, defense attorneys will point out to the jury that “when their freedom was not directly at stake, look at the choices they made.”

Can monoculture survive the algorithm?
Patti Smith’s new memoir is a dreamy recollection of a terrible year
Why you probably can’t sue your employer for sexual harassment
The 9 best movies you can now watch at home, from Trolls World Tour to Parasite
In 2017, women marched against Trump. Now they’re marching to get rid of him.
Poll: Mike Bloomberg is now in second place in the Democratic primary