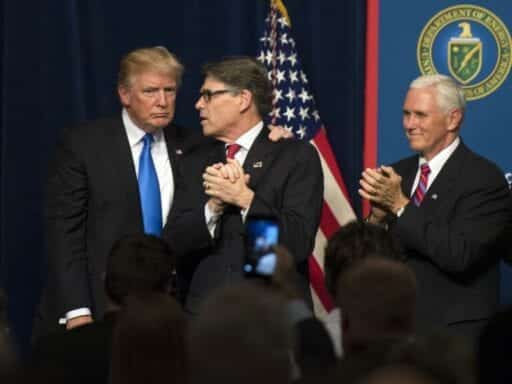 The GOP has become the party of crony capitalism.

For as long as I’ve been alive, there has been an established narrative about America’s two political parties: The Democrats are the do-gooders, the party of fluffy-headed ideas that would help this or that group and would cost a lot of money; the Republicans are the party of business, hard-headed capitalists who understand how regulations hurt economic growth.

That narrative hasn’t been accurate for a while now, but in this as in so many areas, it has taken Trump to strip away all remaining illusion and expose what the GOP has become.

It is true that, ever since Trump was elected, his administration has been rolling back regulations passed by previous Democratic administrations. But, with increasing frequency, these rollbacks are going further than business wants, leaving regulated businesses vulnerable to social disapprobation and abrupt future policy shifts while creating an environment of deep regulatory uncertainty that makes long-term planning difficult.

It is not “the economy” that benefits from chaos and uncertainty, it’s the polluters, the cheaters, the ones meeting with Trump officials behind closed doors and carving out special deals. What’s being boosted is not capitalism, but crony capitalism.

Business got what it wanted with Trump, but as my granddad used to say, they got more of what they wanted than they wanted. Now some big companies find themselves in the bewildering position of begging an administration for tougher rules. The businesses in question deserve no sympathy — lie down with dogs, wake up with fleas, etc. — but their strange lobbying inversion is quite revealing about the state of partisan politics and the disposition of the parties toward the business community.

Let’s a take a quick look at three examples.

Auto companies have fought against tighter fuel economy standards for decades. During the massive recession of 2008, auto companies almost went under. In exchange for a bailout from the Obama administration (speaking of the party of business), they agreed to accept tighter standards: roughly 54.5 miles per gallon by 2025 for their light-duty fleets.

The second Trump entered office, the same companies, in utterly craven and short-sighted fashion, started lobbying him to weaken those rules.

But they just wanted weaker rules. They know they have to improve fuel economy and start making electric vehicles in the long term — all the social trends are moving that way, the international market is moving, technology is moving — but they just wanted to go a little slower so they could profit from as many polluting SUVs as possible during the transition. Above all, they want stability and predictability in an increasingly volatile market.

Just prior to the announcement of Trump’s new rule, a spokesperson for the Alliance of Automobile Manufacturers told Vox’s Umair Irfan that, “While we have said that reopening the midterm review [of fuel economy standards] was the right thing to do, the Alliance has long said that we support year-over-year increases in fuel economy.”

Oh well. It is some kind of poetic justice, I suppose, that auto companies got much more than they asked for. Rather than slower year-over-year increases, Trump’s Environmental Protection Agency plans to freeze standards entirely at 2020 levels, through 2025. What’s more, it intends to deny California the waiver from federal standards that the state has exercised ever since the Clean Air Act was passed. California is going to fight EPA in the courts.

California will fight this stupidity in every conceivable way possible: https://t.co/OWqbFIUmUl https://t.co/qrH7gSaWDn

In July, four auto companies (Ford, Volkswagen, Honda, and BMW) struck a surprise deal with California, agreeing to raise the fuel economy of their fleets in accord with the state’s standards rather than feds’. California’s standards would target roughly the same level as Obama’s — 54 mpg by 2026 — but offer more routes to compliance.

Those companies represent only a third of the US market, but the other auto companies have also expressed openness to the idea. (Read Irfan’s great explainer on this.) They want something predictable, something to plan around. At least if they follow California standards, they know the next Democratic president won’t come in and flip them in a radically different direction. They prefer regulation to chaos and partisan nihilism.

Now we find ourselves in a surreal situation, with Trump attacking auto companies for political correctness.

My proposal to the politically correct Automobile Companies would lower the average price of a car to consumers by more than $3000, while at the same time making the cars substantially safer. Engines would run smoother. Very little impact on the environment! Foolish executives!

Foolish executives! said the leader of the party of business.

Freezing standards in place would simultaneously benefit the dirtiest and penalize the cleanest car companies. In particular, it would hurt Tesla and other automakers producing low-emission vehicles. It would encourage the slow-walkers and grifters, the companies that plan to pollute as much as they can until they day they’re forced to stop, the ones substituting lobbying muscle for innovation.

As we will see, that is something of a theme.

Methane is a potent greenhouse gas, leaked or deliberately “flared” all along the oil and gas supply chain. Recent research suggests that the boom in US fracking may be at least in part responsible for the global spike in methane emissions.

The Trump administration rolled out a sweeping plan on Thursday to reduce regulation of methane emissions from oil and gas operations. The plan would eliminate (Obama-era) federal requirements that oil and gas companies install technology to detect and limit methane emissions from drilling infrastructure. And it would reopen the question of whether the EPA has authority to limit methane at all.

As Lisa Friedman and Coral Davenport report for the New York Times, “the rollback plan is particularly notable because major energy companies have, in fact, spoken out against it.”

The big oil and gas companies like BP, Shell, and Exxon realize that the reputation of natural gas in the age of climate change in part depends on the notion that it is a climate-friendly alternative to coal; that’s why they have joined the Oil and Gas Climate Initiative, a voluntary program to lower the carbon footprint of the oil and gas supply chain. A similar effort called the One Future Coalition represents over a dozen mid-sized oil and gas companies (including pipeline company Kinder Morgan).

Scott Silvestri, a spokesman for Exxon Mobil, told the New York Times, “Last year, we announced our support for the direct regulation of methane emissions for new and existing oil and gas facilities. That hasn’t changed.”

These companies have the resources to install modern methane-control technology, they stand to gain reputational benefits from doing so, and they, like the auto companies, crave certainty and predictability above all else.

It is owners of marginal wells and the smaller companies in the supply chain (represented by the American Petroleum Institute) — the ones struggling to stay afloat in a time of low oil and gas prices, the ones more likely to be owned by rural Trump constituents — that are lobbying for this rule. They calculate that if they are forced to guarantee methane reductions, they won’t make money and they’ll go under. Their business model depends on polluting.

Darlene Wallace, president of Oklahoma’s Columbus Oil, told the NYT, “Most people who own marginal wells are rural people, and all the regulation is going to do is take a living away from a lot of people.”

And so, again, it is the laggards and polluters, the ones lucky enough to be among Trump’s valued base, who will set the pace for the industry and define its reputation. The lack of methane standards will only hasten the turn against natural gas in the long term, but the GOP’s political myopia and ideological extremism no longer give long-term business interests much voice.

As Robert Walton reports for Utility Dive, the Trump administration is engaged in a wide-ranging war on energy efficiency standards — which, even for an administration dedicated to owning the libs, is bizarre. Energy efficiency regulations are some of the most demonstrably net-beneficial policies available to any government; they save both businesses and consumers money, as study after study has shown. But they are rules, so Trump Republicans hate them.

Department of Energy has tried to roll back rules requiring more energy-efficient light bulbs (a move dozens of large utilities have opposed). In his annual budget, Trump tried to kill off the beloved Energy Star program of appliance ratings (a voluntary program that zero companies have called for ending). DOE is considering changes to the “process rule” governing new efficiency standards that would place what advocates say are arbitrary hurdles in the way of new rules, disrupting a process that has worked well for decades and, again, virtually no one opposed.

Most recently, DOE has proposed a rule change that would allow companies (without publicly disclosing that they are doing so) to opt out of the testing meant to ensure that their products comply with efficiency standards. Under the new rule, companies can apply for temporary waivers and if DOE doesn’t act on them in 30 days (which it often doesn’t have the capacity to do), the waivers are automatically granted.

And even if the department rejects the application for a waiver, the company gets a 180-day (six-month!) grace period, after which there’s nothing stopping it from simply submitting another waiver application. In this way, a company could effectively opt out of testing and neither their competitors nor the public would have any way of knowing.

If the rule change goes into effect, every business that makes products regulated by federal efficiency standards will have to wonder if its competitors are cheating. It’s the opposite of regulatory certainty. It’s institutionalized regulatory paranoia.

“Who would lose out?” asks Andrew deLaski, head of the Appliance Standards Awareness Project (ASAP), in a blog post. “Competitors who play by the rules and the consumers and businesses unknowingly saddled with purchases that fail to meet minimum standards, wasting energy and money.”

And who would win out under Trump’s new rule? Again, it’s the laggards, the cheats, the ones leveraging political influence to make a little extra profit by playing dirty.

The examples above differ in many ways, but they have a few things in common.

Most of all, they are not good for business, writ large. In every case, they take a stable regulatory environment with established rules and long-term predictability and throw it into uncertainty. Automakers don’t know if they’ll now be forced to make two different lines of cars or if they’ll be able to justify their spending on innovation. Despite the need to improve their reputations, oil and gas companies that reduce methane emissions now will be suckers, losing out to competitors willing to cut corners. Appliance manufacturers have no idea how efficiency standards will be developed or enforced.

Trump has swung things so far in the deregulatory direction that there is almost certain to be an enormous backlash in the other direction when Democrats take power. His nihilist flailing has made long-term planning almost impossible — for everyone, really, but especially for businesses with multi-decade investment horizons.

This, above all, is why Trump is getting so much pushback from businesses; it’s not the goodness of their hearts or a sudden outbreak of pro-social sentiment. It’s just that he’s creating a chaotic, unpredictable race to the bottom in every industry he touches. It’s not going to reward responsible business behavior. It’s going to create a mad scramble in which the winners are those willing to pollute, cheat, and curry political favor — just the sort of business environment wannabe autocrats like Trump enjoy.

A well-run capitalist economy is governed by rule of law, predictably and consistently enforced. A crony capitalist economy, like the one Trump seeks to create with his deregulatory bender, is, like Trump himself, volatile, impulsive, governed by the most venal instincts, and destined, given sufficient time, to end in disaster.