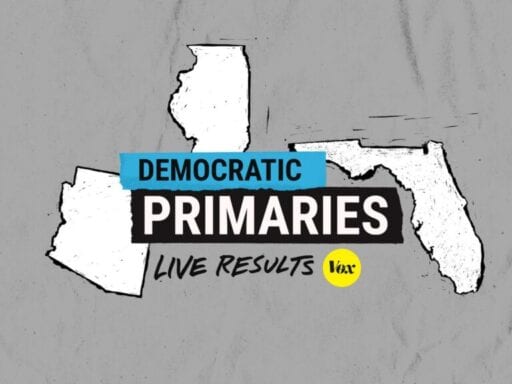 As Ohio postpones its primary due to coronavirus concerns, voters in three other states are headed to the polls.

The Democratic presidential race is adjusting to a stark new reality: Candidates are campaigning and voters are heading to the polls in the middle of a coronavirus outbreak.

That isn’t stopping three out of the four states that had primaries scheduled March 17. Polls are open in Florida, Illinois, and Arizona — though Ohio has delayed its own.

Ohio Gov. Mike DeWine announced he is moving to postpone that state’s primary until June 2 owing to the coronavirus outbreak. After a legal back-and-forth Monday night, the Ohio Supreme Court allowed the delay to proceed, the Columbus Dispatch reported. Ohio voters who have already cast early ballots or voted through the mail will still have their votes counted, though results likely won’t be reported Tuesday night. The three other states are proceeding as normal.

The Democratic primary has narrowed to a two-man race between former Vice President Joe Biden and Sen. Bernie Sanders (I-VT). But since last Tuesday’s primaries coincided with a growing concern about coronavirus, both candidates have transitioned their campaigns to largely virtual operations so as not to risk exposing campaign staff, volunteers, voters, or themselves to the spreading virus.

As for the state of the race itself, Biden is the current frontrunner with about 150 more delegates than Sanders. The fundamentals of the March 17 primaries look favorable for Biden as well; Arizona’s Latino population could be a bright spot for Sanders, but Florida’s Latino population is not nearly as favorable to the Vermont senator. And Florida has far more delegates up for grabs than Arizona does.

It’s worth noting that Tuesday’s elections could be especially unpredictable due to America’s current public health crisis. On Monday, President Donald Trump announced new federal guidelines calling for gatherings of no more than 10 people to mitigate the spread of coronavirus.

We have yet to see whether coronavirus will dampen turnout in any of these states, but it’s a real possibility.

Polls begin closing at 7 pm ET, and the last ones in Arizona will close at 10 pm ET. Vox will be covering the results live, thanks to our friends at Decision Desk:

With Ohio postponing its primary, the number of delegates being allotted on Tuesday will drop from 577 pledged delegates to 441. Even so, it will still be a decisive day in the Democratic presidential primary; more than half of the pledged delegates available nationally will be allotted by March 17.

The quick results, by state

We’ll post who wins each of the states holding primaries Tuesday below, once Decision Desk makes a call.

How to think about the delegate math so far

The delegate math is looking a lot clearer than it did a week ago. That’s because since March 14, two big variables have fallen into place.

First of all, the long-awaited primary results from California’s Super Tuesday finally came in. Sanders won the delegate-rich state, but it didn’t give him a massive boost in the race for delegates. Sanders picked up 156 delegates from California, compared to 108 for Biden.

Second, Biden romped in most of the six March 10 contests. He both won in states where he was expected to, like Missouri and Mississippi, as well as states that were more contested like Michigan, Washington, and Idaho (Biden did lose North Dakota to Sanders).

As Vox’s Andrew Prokop noted, March 10 was expected to be Sanders’s last best hope for a comeback, and it was not. The odds for him surprising on March 17 look even worse, given Florida has the largest delegate haul on Tuesday and Biden is leading there by nearly 40 points, according to the latest RealClearPolitics polling average.

March 17 is key for another reason: We officially cross the halfway mark of allotted pledged delegates. Over 50 percent of pledged delegates will be spoken for by the time these contest are said and done, even with Ohio moving its primary.

If Biden romps yet again, the race could effectively be over.

What to expect in the March 17 primaries

March 17 will be a big test of whether Biden has the nomination locked up or whether Sanders still has a fighting chance.

We also have yet to see how the coronavirus impacts turnout on voting day, and if turnout is low, how that could impact the potential outcome of the election itself.

Right now, most national and state polls are predominantly showing Biden in a strong position. While parts of Illinois and Arizona that are Latino-heavy could go for Sanders, Latinos in Florida don’t feel the same. Here’s how Vox’s Nicole Narea explains the difference:

Whereas Mexican Americans made up the vast majority of Latino voters in those previous contests, Florida’s Latinos are primarily Cuban, Puerto Rican, and Venezuelan, and they have different political preferences.

Along with Biden’s nearly 40-point lead in Florida, he also has comfortable leads in Arizona and Ohio. The FiveThirtyEight model predicts Biden will likely win Illinois but also notes there are some heavily Latino Congressional districts where Sanders could pick up some votes. While Sanders is expected to overperform Biden among Arizona’s Latino voters, it could be a telling shift if Biden holds his own in the community.

While Trump told reporters he thought postponing elections “is unnecessary,” he announced new federal guidelines limiting gatherings to just 10 people. Those contradictory messages could spur voters in each state to stay home rather than risk their health to cast their ballots. By Tuesday morning, a Chicago Election Board official told reporters they had “extremely low turnout” in the morning, per MSNBC’s Garrett Haake.

There is already a push from some federal lawmakers to enact vote-by-mail in all states in response to coronavirus, but even if that happens it may realistically be closer to the November general election, rather than during the rest of the primaries this spring.