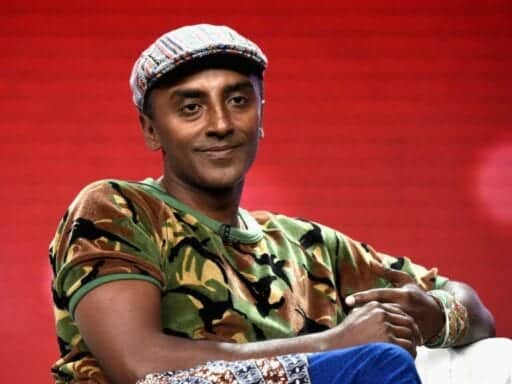 The chef and host of No Passport Required talks creativity and diversity on The Ezra Klein Show.

Chef Marcus Samuelsson was born in Ethiopia and adopted by Swedish parents; studied in Japan, France, and Switzerland; and opened the Michelin-starred restaurant Red Rooster in Harlem, New York. He is also the host of the new Eater and PBS show No Passport Required, which celebrates immigrant communities in America through food. Ezra Klein recently invited Samuelsson to appear on his podcast as “an extraordinary testament to what is possible when countries open themselves to each other.”

On The Ezra Klein Show, Samuelsson opens up about his experience as an outsider in America, what Donald Trump doesn’t understand about “the incredible city he’s called home for decades,” and how to collaborate between cultures without appropriating them. He also gets emotional about the legacy of his friend Anthony Bourdain, whose show No Reservations broke ground for a show like No Passport Required.

Samuelsson decided to keep his book recommendations to his “two loves that [he’s] had all [his] life”: cooking and soccer.

1) Pelé: The Autobiography by Pelé

In his memoir Yes, Chef, Samuelsson describes his childhood friend tossing the autobiography of the Brazilian soccer superstar Pelé to him, saying it was the first non-school book he ever read. While he admits that it’s not the most well-written of memoirs, “when you’re 8 and you’re a black kid in Sweden looking for your identity, it’s like, ‘Whoa.’”

“Again, not a great read,” Samuelsson says, adding that every chef he knows owns the first cookbook by Chicago culinary legend Charlie Trotter. The book compiles recipes from Trotter’s eponymous restaurant; the chef’s distinctive style changed the game in American cuisine in the 1990s. Samuelsson credits Trotter as the reason he decided to open a restaurant in the US. “I said, ‘Wherever this guy is, I gotta go,’ and I gathered my money and I went.”

3) And Still I Cook by Leah Chase

And Still I Cook is a cookbook/memoir by the 95-year-old queen of Creole cuisine, Leah Chase. Chase’s New Orleans restaurant, Dooky Chase, was open to all in a time when it was illegal for black and white patrons to eat in the same restaurant. Samuelsson calls Chase his idol and says she represents everything he loves about this country. “She kept on cooking and served everybody until the law changed. What could be more American than a black female owning her own business, raising generational cooks in NOLA?”

You can listen to the full conversation with Marcus Samuelsson on The Ezra Klein Show by subscribing on Apple Podcasts or wherever you get your podcasts, or by streaming the episode here:

Iowa shouldn’t vote first. Here’s an idea to fix the primary process.
The ways Democrats could retake the Senate majority, explained
Top 2020 candidates will be stuck in Washington because of the impeachment trial
The 14 Democrats running for president and everything else you should know about 2020
Buffy the Vampire Slayer is getting a reboot with a black woman in the lead
There are far worse things than polarization