Mark Esper is out as defense secretary, months after defying Trump 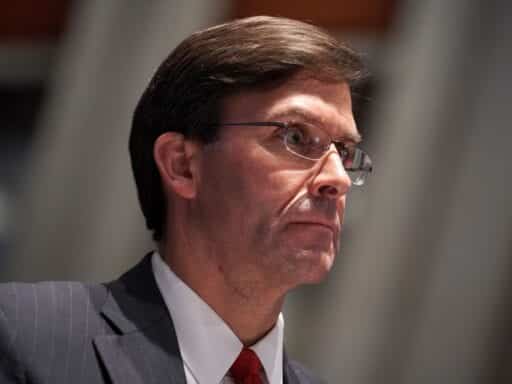 The Pentagon boss’s ouster was a long time coming.

Secretary of Defense Mark Esper has been fired, soon after President Donald Trump lost the 2020 election.

Trump made the Monday afternoon announcement, as he often does, on Twitter. “Mark Esper has been terminated,” the president wrote. “I would like to thank him for his service.” He added that Christopher Miller, the director of the National Counterterrorism Center, would take over as the acting Pentagon boss.

…Chris will do a GREAT job! Mark Esper has been terminated. I would like to thank him for his service.

Esper has had a hot-and-cold relationship with Trump since he became defense secretary in July 2019, and in recent weeks many observers believed the Pentagon chief was a “dead man walking.” They were right.

Initially, the former Army infantry member and Raytheon lobbyist seemed to be in lockstep with the president. When Trump wanted US troops sent to the border with Mexico, Esper gave the authorization with minimal fuss. When Trump wanted to block military aid to Ukraine — an event that led to Trump’s impeachment — Esper did little to stop it or detail his knowledge of the effort.

Esper even joined Trump for the president’s controversial walk across Lafayette Square in June after federal law enforcement officials scattered a protest crowd with tear gas — all in service of a photo op featuring Trump holding a Bible.

Esper’s conduct earned him the nickname “Yesper,” underscoring the sentiment in Washington’s national security circles that the secretary was Trump’s lapdog. In August, the president even repeated that nickname when talking about Esper with reporters.

But over the summer, Esper began to buck Trump on some of his more controversial demands, quickly putting him on the president’s bad side.

When Trump demanded that active-duty troops be sent into cities to quash the anti-police brutality protests taking place across the country, Esper publicly rejected the president’s plea.

“The option to use active duty forces in a law enforcement role should only be used as a matter of last resort, and only in the most urgent and dire of situations,” Esper said during a June 3 Pentagon news conference. “We are not in one of those situations now. I do not support invoking the Insurrection Act,” he continued, referring to a centuries-old law that gives the president the authority to send troops to halt domestic unrest.

Trump considered firing Esper over that announcement but was talked out of it by aides. That gave Esper the space the next month to ban the Confederate flag on all military property, even as Trump argued Army bases should still be named after Confederate leaders.

Esper kept a noticeably lower profile after that. He spent the last few months traveling the world and avoiding the press, likely in an effort to stay out of the spotlight and the election conversation. He also had to contend with a coronavirus spread within the US military, which so far has killed nine troops out of about 2.2 million.

That apparently wasn’t enough to get Esper back in Trump’s good graces. The president remained angry over Esper’s June statement and had discussed replacing him month after month with staff. The main argument against removing Esper was that he hadn’t clearly done anything wrong and that it would look bad ahead of the election.

Esper, though, knew of Trump’s ire and drafted a resignation letter as he worked with lawmakers to change the names of bases honoring Confederates.

With the election over, Trump finally followed through on his desire to oust his Pentagon chief. Esper may rue no longer being the defense secretary, but he might like getting his name back.