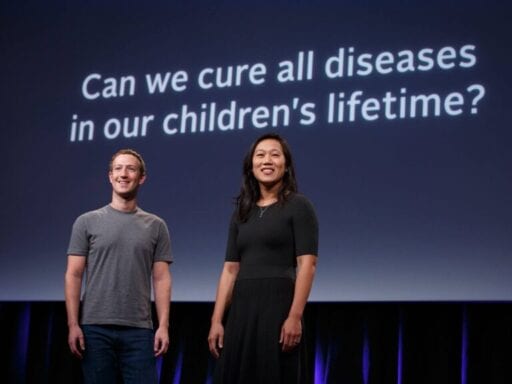 The $25 million gift is Zuckerberg’s biggest donation yet to tackle the coronavirus.

Mark Zuckerberg and his wife Priscilla Chan are putting $25 million of their money behind an effort to develop therapeutic treatments for the Covid-19 coronavirus. It’s one of the biggest gifts yet from tech billionaires in response to the crisis.

The Chan Zuckerberg Initiative, a philanthropy run by the couple, is sinking the cash into an effort run by Zuckerberg’s mentor, Bill Gates, that is exploring new possible antiviral drugs that could protect people from the disease. The Gates Foundation organized the effort, called the “COVID-19 Therapeutics Accelerator” with a $50 million gift last month, and the donation from the Chan Zuckerberg Initiative brings the total funding to $125 million.

The donation is among the biggest single grants to an outside organization ever given by CZI, which was established in 2015. And the $25 million is one of the boldest ways in which the tech community is marshaling its resources to fight the global pandemic, a response that includes everything from charitable giving to venture capital investments and public commentary.

CZI’s gift is the second biggest tech philanthropy donation for the coronavirus that has been publicly unveiled, falling short of only the Gates Foundation’s donation to the same therapeutics fund.

Big Tech companies have announced larger commitments to help people cope with the economic consequences of the pandemic, but those have come off of their corporate balance sheets. Both Netflix and Facebook have unveiled separate $100 million funds to help the creative community and small businesses, respectively, although some of that money was through in-kind contributions, such as ad credits. Ditto for Cisco, which technically has unveiled the biggest philanthropic commitment in the world to date mostly to bolster the international response — $225 million — although 93% of that money was in “product.”

The $25 million from Zuckerberg could help develop a drug for a virus that currently has no cure and lacks a vaccine, despite scientists’ urgent global effort to develop both. Philanthropists are hoping to either create and distribute a new treatment alongside pharmaceutical companies, or to repurpose an existing drug, even one that may already have regulatory approval.

The goal, organizers say, is to find a treatment on a shorter time frame than the one that is needed to develop a vaccine, which could take years.

“Right now, we can only treat the symptoms since there simply aren’t antiviral medications that can treat a range of conditions in the same way that antibiotics do for bacterial infections,” said Mark Suzman, the new head of the Gates Foundation, when he announced the new effort earlier this month. “This is where we believe we can help by partnering with private and philanthropic enterprises to lower the financial risk and technical barriers for biotech and pharmaceutical companies developing antivirals for COVID-19.”

It’s not known what types of treatments exactly the Gates-Zuckerberg push will test. Some leaders in the tech community, such as Larry Ellison, have tried to push unproven drugs for treating Covid-19, such as chloroquine and hydroxychloroquine, that have been used to treat malaria. Gates has said that his team has been studying these but had not yet made a determination.

At a time when tech philanthropists and companies are scrambling to fill in for the government’s failures — offering up resources such as masks and testing kits — CZI’s role in developing possible treatments is actually fairly traditional. Silicon Valley has a long history of investigating new medical treatments, and Zuckerberg even set up an affiliated group in his charitable empire, called the Chan Zuckerberg Biohub, to specifically explore possible pharmaceutical breakthroughs.

So in an abnormal time, this feels refreshingly normal.

He needed a gender-affirming procedure. The hospital said no.
The best case against withdrawing all US troops from Afghanistan
A second Covid-19 vaccine has been recommended for emergency use by FDA advisers
John Delaney has a plan for universal health care — but don’t call it “Medicare-for-all”
Any bipartisan January 6 commission is probably doomed
Why is framing a picture so expensive?