Mark Zuckerberg is the new political villain for the Democratic Party 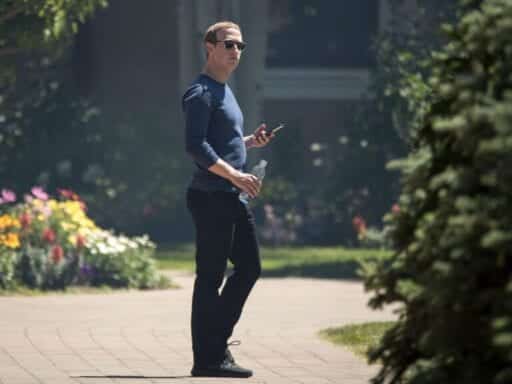 Everyone running for president, it seems, has their own reason for pushing Mark Zuckerberg away.

To Elizabeth Warren, he is a threat to democracy. To Pete Buttigieg, he is a political liability. And to the Democratic base as a whole ahead of 2020, he is starting to resemble the Koch Brothers.

The Democratic Party has cycled through various villains over the last few decades, with the conservative billionaires Charles and David Koch occupying the most recent slot for the elite, well-endowed, shadowy figures supposedly pulling the strings on American elections.

And as the 2020 primary mobilizes a new generation of voters, the founder of Facebook is pulling into that new pole position.

Zuckerberg has emerged as the new political boogeyman in a way that would be unthinkable just a few years ago. And while it is not breaking news that Facebook is more toxic than ever, that toxicity now goes well beyond Facebook as a corporation and has infected Zuckerberg’s brand as a human being.

Events of the last week have shown how the left’s messaging has evolved to encircle Zuckerberg. Dunking on the world’s third-richest person has become an applause line. Presidential candidates now have to scramble to demonstrate their distance from him when reports emerge that even put them and Zuckerberg in the same sentence. Accepting a political donation from Mark Zuckerberg in 2020 is nowhere close to worth the money.

The person most responsible for Zuckerberg’s new status as a punchline: Elizabeth Warren.

“She’s trying to make Zuck to the left what [George] Soros is to the right,” said Zak Malamed, a Bay Area political activist with ties to younger Democratic donors. “Long term, if it works and as Charles Koch ages, Zuck could become the left’s new villain.”

Take what happened last Friday during a Warren rally of 4,000 people in Norfolk, Virginia.

Warren was telling fans about how companies had gotten so big that they had amassed enormous power — and that’s why she would “break ’em up.” But she didn’t stop there.

A few minutes later, she brought him up again, this time to make a point about her plan to tax people with wealth over $50 million.

“And Mark Zuckerberg, I’m still looking at you,” she said.

Warren could’ve chosen any billionaire to serve as her foil on that latter point. But it wasn’t Charles Koch or Sheldon Adelson — or Bill Gates or Jeff Bezos, the world’s two richest people. It was the CEO of Facebook.

This is obviously not accidental. Warren clearly sees some political upside to her crusade. Warren called for breaking up tech companies nine months ago but the issue faded from the headlines as she rolled out other plans.

In the wake of a leaked recording that revealed Zuckerberg on a war footing as he prepared for a possible Warren presidency, the Democratic frontrunner has brought up Facebook’s indiscretions seemingly every day, whether it’s on Twitter, on Facebook, or at political rallies. And she has increasingly dragged Zuckerberg into it personally, caricaturing him as not just the titular head of Facebook but as the unofficial class president of the out-of-touch billionaires club.

Figuring out whether or not they do is somewhat difficult given the scarcity of public polling. A poll in mid-2017 said only 29 percent of Americans had an “unfavorable” opinion of Zuckerberg (the poll surveyed him as a possible presidential candidate, an absurd idea today). By early 2018, another survey pushed that figure up to 35 percent, with 24 percent having a “favorable” one — although in both surveys, more than 40 percent said they had no opinion of him.

“Facebook is Mark, and Mark is Facebook,” Facebook’s former pollster, who monitored Zuckerberg’s ratings, once told The Verge.

And lest you think this is just a personal beef by one candidate meant to win one news cycle, consider a few other developments in the Democratic primary over the last few days.

Press aides made sure reporters knew that the Buttigieg campaign had received 7,000 applications for jobs. They emphasized that Zuckerberg and Chan had referred a total of two people — and only two — for roles in the campaign. And they clarified that neither of the referrals, who were both hired, took jobs crafting campaign policy.

We make staff decisions on how to build the best team in politics, which I’m proud to report we have! https://t.co/Y9CXvBKYdb

In some ways, the defense was more revealing than the referrals themselves. The Buttigieg campaign knew that the story was adding to a budding perception problem, especially as Warren not-so-subtly drops crumbs that she’ll be using Buttigieg’s strong support from Silicon Valley donors as evidence that he is incapable of regulating them.

“They already have way too much influence in Washington and they are helping drive every conversation in a way that will protect Mark Zuckerberg,” Warren told reporters when asked about the Bloomberg story on Monday.

The tectonic plates of Silicon Valley politics have shifted dramatically since the 2016 election. Barack Obama made Silicon Valley coolness a part of his political aesthetic and tech names were expected to stack the highest echelons of a Hillary Clinton administration.

No one epitomized that more than Sheryl Sandberg, Zuckerberg’s No. 2, who was widely thought to be Clinton’s presumptive nominee for Secretary of the Treasury and who raised hundreds of thousands of dollars for Clinton’s campaign. Sandberg has emerged as a major Democratic giver, backing Senate candidates from across the country every year.

It was routine for someone like Sandberg to open her checkbook for Democrats early in the primary cycle. In March 2007, she maxed-out to Hillary Clinton. And on the day that Clinton announced her second run in April 2015, Sandberg gave Clinton the legal maximum again.

She has yet to give to any 2020 candidate as of this September, new federal disclosures released last week show. In this political climate, it’s unlikely that a presidential candidate would even want her money and the complications it would bring.

How Donald Trump is losing Republicans the Colorado Senate race
Bombshell turns the story of harassment at Fox News into a schlocky girl power anthem
Is this the most important century in human history?
Hannity claims he’s “never called the virus a hoax” 9 days after decrying Democrats’ “new hoax”
From coast to coast, protests against police brutality and racism are still going strong
Call centers have never been more important — or more strapped