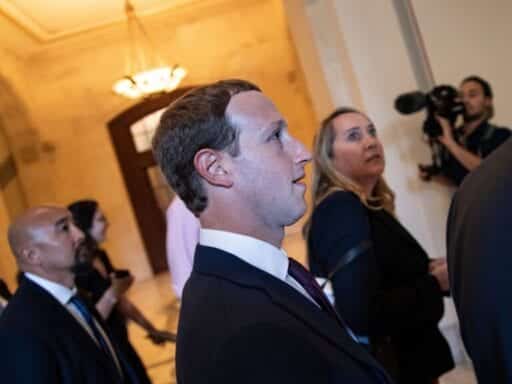 Facebook wanted to talk about election security, Russia, and Iran. Reporters had other ideas. This may go on for a while.

Last week, Mark Zuckerberg gave a long speech defending his decision to allow political ads on Facebook — and to not ban politicians from lying in those ads.

On Monday, Zuckerberg ended up repeating many of the lines he used in last week’s speech. But the context was different: Zuckerberg was hosting a press conference that was supposed to be about Facebook’s “elections preparedness.”

But journalists weren’t done scrutinizing Zuckerberg’s political ads policies. Over and over, they had questions about how the policy was supposed to work, what would happen if politicians try to abuse it, and why he was doing it in the first place.

Zuckerberg took 13 questions during his press conference. Seven of them were about political ads.

So: If Zuckerberg or his advisers thought they had laid the issue to rest last week, they got new data today. Among reporters, at least, Facebook’s “don’t lie on Facebook unless you’re a politician running an ad” policy is not settled.

Zuckerberg seems to think this is old news, as he expressed with a very slight tinge of annoyance today: “I think a lot of people took the — this update that we made, as if it was some kind of big departure from our existing policy. This is actually meant to clarify the way we’ve been operating for some time now,” he said on the call. That didn’t stop the questions.

It is possible that the issue will indeed go away sooner than later. Because the press, like everyone else, has a short attention span.

To wit: After the 2016 election, the notion that Russians abused Facebook as part of their efforts to sway the outcome was a very big deal. And it turned out to be true. But today, Facebook said it had discovered another attempt by Russia to mess with American voters — and it didn’t get a single question about it.

On the other hand, Sen. Elizabeth Warren thinks Facebook’s political ads policy is a fight worth having, and she’s not leaving the presidential race anytime soon. And Facebook’s reputation is in a state where it’s unlikely to get the benefit of the doubt whenever anyone accuses it of anything.

So Warren’s unfounded charges, for instance, that Zuckerberg is allowing misleading ads on his sites because of a backroom deal with Donald Trump, or simply because he wants politicians’ cash, are likely to have lasting traction.

The good news for Zuckerberg is that he seems quite comfortable articulating his position. Today’s press conference recycled many of the themes Zuckerberg used in his speech last week, but Zuckerberg wasn’t just robotically repeating lines.

For instance, here’s Zuckerberg Thursday: “And while I certainly worry about an erosion of truth, I don’t think most people want to live in a world where you can only post things that tech companies judged to be 100 percent true.”

And today: “I just think that in a democracy people should be able to see for themselves what politicians are saying, and I think that people should make up their own minds about which candidates are credible and which candidates have the kind of character that they want to see in their elected officials. And I don’t think those determinations should come from tech companies.”

Then again, sometimes he was just repeating himself.

Thursday: “Banning political ads favors incumbents and whoever the media chooses to cover.”

Today: “Banning political ads would favor incumbents and whoever the media decided to cover most.”

But that repetition is only a bad thing if your job is to listen to Zuckerberg speeches and press conferences. If you’re a normal person and you only hear snippets of this stuff, you’ll just hear a CEO confidently making his case.

Now, if you want to argue that this is table stakes for a man running a public company worth $528 billion, you’re right.

founder/owner of a very successful company is actually a thoughtful guy https://t.co/bQqqAIsqMw

But it’s also a light year away from the old Zuckerberg, who didn’t love taking questions from journalists in public forums and it showed. Now Zuckerberg can answer queries at length. Whether we like the answers is a different question.

Mark Zuckerberg on leaked audio: Trump’s looting and shooting reference “has no history of being rea...
Vox Sentences: Articles, articulated
2 million federal workers are poised to get paid parental leave for the first time ever
“Jackpot”: Inside the US military raid to kill ISIS leader Baghdadi
A tiny Amazon seller’s hand sanitizer went viral because of coronavirus. Then the trouble began.
R. Kelly may be facing indictment on child pornography charges. Again.