Mars will be extra big and bright in the sky this weekend. Take a look for yourself. 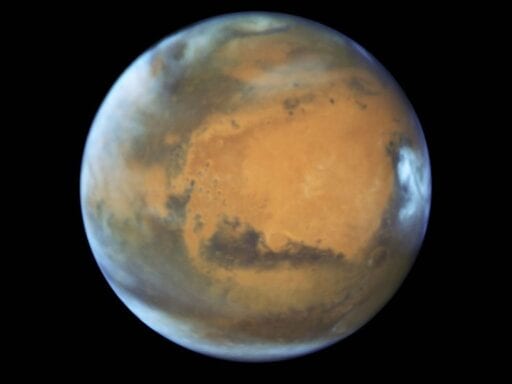 While you stare at Mars, contemplate the cool new findings that the planet might have liquid water beneath its surface.

On July 27, the sun, the Earth, and the planet Mars will line up for a once-in-two-years treat called “Mars in opposition.” It’s a chance to see the red planet in big, bright detail in the night sky.

This event is called an “opposition” simply because on this one night, Mars and the sun will be on directly opposite sides of Earth.

When celestial objects are directly opposite the sun, they appear brighter in the sky. Mars will shine much more brightly than it usually does.

The opposition also occurs just a few days before Earth and Mars reach their closest approach to one another — July 31. This makes Mars appear slightly bigger in the sky than it normally would.

You can look for this big, bright, and beautiful Mars rising in the southeastern part of the sky in the early evening, and then watch it climb higher and higher overnight before it sets in the southwest. (Coincidentally, on July 27, there will also be a total lunar eclipse that most of the world — but not North America — can see.)

And while you’re staring at Mars, you can contemplate this stunning recent finding: An orbiting spacecraft has detected signs of an underground lake near the Martian south pole. Radar probing beneath Mars’s surface has revealed there’s likely a 12-mile-wide area of liquid water buried. Normally, at Mars temperatures, any water should be frozen solid. But scientists believe a strong concentration of salts has lowered the freezing point. If there is liquid water on Mars, it’s an important clue to the possible presence of life on the planet (either now or during Mars’s history).

Scientists are not sure what else other than water could explain the radar findings, though it would take actually drilling into the surface of Mars to prove the existence of this underground lake.

During opposition, Mars will be visible to the naked eye. But a basic backyard telescope will reveal details of its surface that are harder to see at other times, like its polar ice caps. (Though planet-wide dust storms might obscure the view this year, NASA notes.)

In the week before the last opposition, in 2016, NASA turned the Hubble Space Telescope to the red planet. It shows detail on the surface usually revealed by interplanetary probes, including clouds over the southern ice cap — “details as small as 20 to 30 miles across,” NASA explains.

You won’t be able to see Mars with such clear detail. But the Hubble shot is a reminder: Mars is an incredible planet right next door to ours. Try to spot it for yourself!

Opposition only occurs every 26 months. But the good news is that Mars should be big and bright for the remainder of the summer. As Mars’s orbit starts to take it farther and farther from the Earth, it will start to appear smaller in the night sky.

Sucking carbon out of the air won’t solve climate change
Trump condemns “all types of racism and acts of violence” ahead of Unite the Right 2
How meritocracy harms everyone — even the winners
Ask a Book Critic: What can I read that will make me feel better about being scared?
PPP loans were supposed to be forgiven. So far, that hasn’t happened.
Dear Michael Bloomberg: Thank you for not running for president